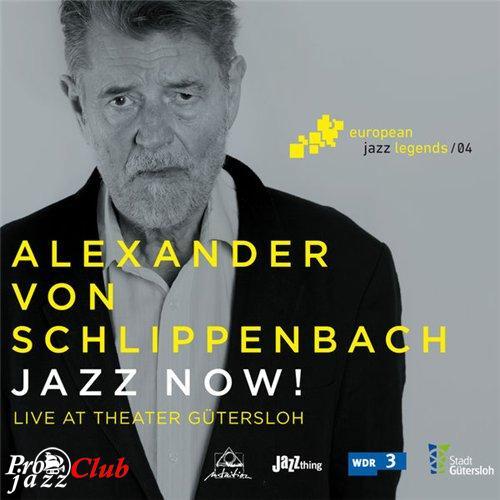 Треклист:
A L E X A N D E R
V O N
S C H L I P P E N B A C H
J A Z Z ' N O W !
Жанр: Free Jazz, Free Improvisation, Avant-Garde
Год издания: 2016
Издатель (лейбл): Double Moon Records/Intuition
Номер по каталогу: INTCHR 71316
Страна исполнителя (группы): Germany
Аудиокодек: FLAC (*.flac)
Тип рипа: tracks
Битрейт аудио: lossless
Продолжительность: 79:35
Источник (релизер): WEB
Наличие сканов: нет
Треклист:
01. Gold Is Where You Find It
02. 12 Bars
03. The Gig
04. Serene
05. The Bells of St. K.
06. Tropi
07. Something Sweet Something Tender
08. Devices and Desires
09. Les
10. Bishop
11. Every Cloud
12. Miss Ann
13. Epistrophy
14. Interview with Gotz Buhler
Лог проверки качества
Об альбоме
Among jazz fans, you can have a lot of fun arguing whether “European Jazz” is a useful counterpoint to the American tradition, an original supplement thereto or “is worth less than American jazz on the market” as it can be read in a Wikipedia forum. There is no doubt that there have been and are gifted musicians this side of the Atlantic, who have molded and formed jazz for decades. They have developed very unique playing styles by merging European music traditions with American influences. To give these pioneers of European jazz a stage was the idea for the series of articles “European Jazz Legends”, which we launched in the magazine Jazz thing in our 100th issue in September 2013. We can now look back on 11 issues. The symbolic stage has now become a real one, and it is in Gutersloh in the middle of Europe. Accompanying each edition of our magazine appearing five times a year, a concert planned especially for this occasion is being organized in cooperation with the label Intuition, the city of Gutersloh and Westdeutscher Rundfunk Koln with current protagonists of the series, hosted by our author Gotz Buhler. Each concert including an on-stage interview with the artist will be broadcast by Westdeutscher Rundfunk (WDR 3) at a later time, and the musical highlights of the concert will be released on a CD.
In other words, five concerts and five CDs in the series “European Jazz Legends” are planned for each year in the future. In addition, a book will be published, for which the article from the magazine will be revised and supplemented, among other things, to provide impressions from the concerts and discussions.
The CD of Alexander von Schlippenbach is the fourth publication in the “European Jazz Legends” series. We from Jazz thing are very proud of this and would like to thank all partners and especially the musicians – and hope that you enjoy this new series.
When Alexander von Schlippenbach debuted his composition “Globe Unity” and the orchestra of the same name at the Berliner Jazztage on November 3rd 1966, the mainstream press was not sure whether to find the result radical or ridiculous: “Witches cauldron” or “Male prank in the Philharmonie” read the headlines the next day. „Back then you could shock people with music, which is not really possible anymore today”, notes the now 77 year old. “But that is not what it is about anyways.”
With a Berlin based ensemble featuring Antonio Borghini on double bass, Heinrich Köbberling on drums and Rudi Mahall on bass clarinet – musicians around thirty to forty years his junior – the pianist and composer offered his current musical concepts during a celebrated concert at the Theater Gütersloh on October 3rd 2015; the audience witnessed a compelling and challenging program of up to date improvisations and (Pre-)Bebop-compositions by Herbie Nichols, Thelonious Monk, and Eric Dolphy. “Free Jazz to me was not necessarily something revolutionary or volitional, but rather a logical music-historical development”, the Count said during the interview for Jazz thing’s series “European Jazz Legends” leading up to this concert.
This time the press lauded the fact that “the music of the pianist from Berlin is not about going the easy route, the one aimed at pleasing everybody, and reproducing something that had been done before.” The headline? “Improvisation till ecstasy.”
Состав
piano Alexander von Schlippenbach
bass clarinet Rudi Mahall
bass Antonio Borghini
drums Heinrich Köbberling
По всем вопросам пишите личное сообщение пользователю M0p94ok.
—
218
M0p94ok
Нет комментариев. Ваш будет первым!
Войдите или зарегистрируйтесь чтобы добавлять комментарии