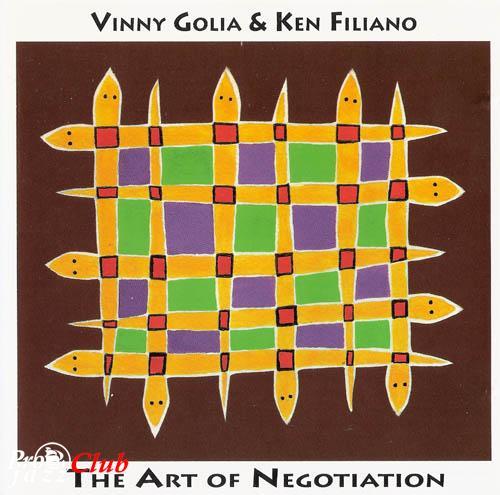 Треклист:
Vinny Golia & Ken Filiano - The Art Of Negotiation
Жанр: Free Jazz, CIMP
Страна-производитель диска: USA
Год издания: 1996
Издатель (лейбл): CIMP
Номер по каталогу: #111
Страна: USA
Аудиокодек: FLAC (*.flac)
Тип рипа: tracks+.cue
Битрейт аудио: lossless
Продолжительность: 1:07:49
Источник (релизер): собственный рип
Наличие сканов в содержимом раздачи: да
1 The First in his Field
2 Lido
3 How can he still be selling cars on TV?
4 Dynamic for Wilimena Fergerson
5 Three Nite Exit
6 Neon Appointment
Recorded at The Spirit Room, Rossie, NY, March 8 & 9, 1996.
Лог создания рипа
Содержание индексной карты (.CUE)
Об альбоме
These gentlemen are longtime friends and collaborators, besides being individually two of the finest exponents of contemporary free jazz, so it would figure that an album of their duets would electrify. This does to a significant degree, but it is almost done in by the severe, non-reverberant recorded sound. The limitations of CIMP's recording techniques cannot be overstated. Producer Bob Rusch and his engineer son Marc take great pride in presenting the music unadorned, without altering or manipulating the sound in any way. Their technique is actually an anti-technique -- they simply set up a pair of top-quality microphones cabled into their digital recording equipment and let the musicians play. In theory, this should work, but the flat, practice-room ambience of Rusch's living room (where most CIMPs are recorded), combined with the extreme brittleness of the digital medium and poor balance between players, results in recordings that are occasionally all but unlistenable. This doesn't fall into that category -- due wholly to the brilliance of the musicians -- but the typical problems with balance and flatness prevail. Golia plays sopranino sax for a good portion of this album; the recording exaggerates the inherent harshness of the horn, and the differences in volume between the two instruments render Filiano almost inaudible (a bit of compression in the mastering process would mitigate this problem, but CIMP either doesn't allow it or doesn't know how to use it). That said, the music made by the two is often stunning, particularly when Golia picks up his bass clarinet. The two instruments operate in similar ranges, so neither becomes dominant in the mix. At such times the remarkable rapport between the two shines through. The sense of cooperation and shared direction is palpable. Bass clarinet just might be Golia's most expressive vehicle. His sound is warm and vocalic, and while his facility is considerable, one gets the feeling that the somewhat cumbersome horn slows Golia down a bit, causing him to be a bit more swinging and melodic than when he's playing the sopranino. Filiano is a bassist for all seasons. He's got both that big, woody pizzicato sound and a tremendous arco technique; his use of upper-harmonics is imaginative and purposeful. They work together hand-in-glove, finishing each other's sentences and providing mutual support for whatever chances one or the other might take. Were it not for the ugliness of the recorded sound, this might very well be a five-star album.
by Chris Kelsey
Состав
Vinny Golia - Sopranino Saxophone, Clarinet, Bass Clarinet
Ken Filiano - Bass, Bass Prepared
Any questions -> support@pro-jazz.com. По всем вопросам пишите -> support@pro-jazz.com
—
148
M0p94ok
Нет комментариев. Ваш будет первым!
Войдите или зарегистрируйтесь чтобы добавлять комментарии