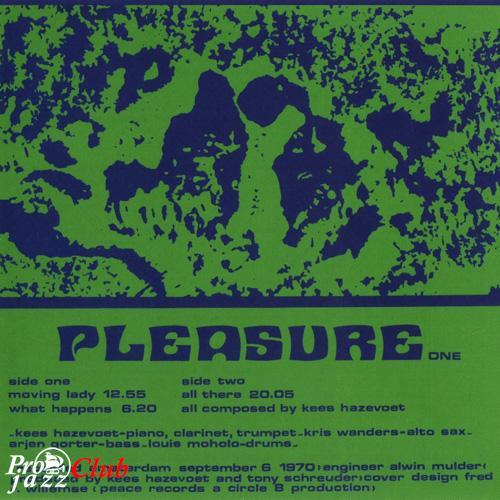 Наличие сканов в содержимом раздачи: да / *.jpg (300 dpi)
Треклист:
1. Moving Lady (12:57)
2. What Happens (06:24)
3. All There (20:18)
All composed by Kees Hazevoet
Доп. информация:
Musicians:
KEES HAZEVOET - piano, clarinet, trumpet
KRIS WANDERS - alto saxophone
ARJEN GORTER - bass
LOUIS MOHOLO - drums
Recorded in Amsterdam, September 6, 1970 by Alwin Mulder
KEES HAZEVOET - Pleasure atavistic.com
KEES HAZEVOET from Wikipedia, the free encyclopedia
KRIS WANDERS Official Site
ARJEN GORTER from Wikipedia, the free encyclopedia
LOUIS MOHOLO from Wikipedia, the free encyclopedia
... photo ...
... review ...
In Amsterdam, at the end of the 1960s, pianist/clarinetist Kees Hazevoet and alto saxophonist Kris Wanders (a Dutchman based in Antwerp, Belgium) faced a dilemma not uncommon in jazz circles: the search for the right drummer. Wanders and Hazevoet began working together in 1969, and they initially turned to a now-deceased Dutch drummer named Eugene Broekhoven, with whom Kees had been rehearsing. Broekhoven had played with Willem Breuker's group in the mid '60s, but at the time he hooked up with Hazevoet he was earning a living in the house band at a strip club.
"Ever since I started listening to jazz (and trying to play it), I had a special interest in the drummers," says Hazevoet. "I always felt that they are the ones that make a band sound good (or bad). And I always had a special bond with the drummer and tried to choose them carefully. Most of the local drummers weren't up to the task, to say the least. Nevertheless, I often managed to make them play in a way that they didn't know themselves capable of - something they themselves acknowledged."
Hazevoet cultivated this kind of simpatico relationship with Broekhoven, and he recalls that Wanders was impressed by the drummer's playing, enough so that he took Broekhoven on a tour of Germany without Hazevoet, only to find that without Kees's guidance he played considerably less well. After the tour, Wanders refused to play with Broekhoven again. The problem was that Hazevoet had arranged a recording session that would ostensibly have involved the drummer. "The solution came quickly and couldn't have been better," says Hazevoet. "A few days before the date I learned that Louis Moholo was in town and asked him if he could join in. So, on a Sunday afternoon, at the auditorium of the Stedelijk Museum, we recorded PLEASURE. As you can hear, Louis picked it up marvelously."
Together with Arjen Gorter, a collaborator of Hazevoet's since school days and the keystone bassist of the emerging Amsterdam scene, Moholo, Wanders and Hazevoet coalesced into a terrific free jazz quartet. Their repertoire included terse themes by Hazevoet, and the playing is propelled by Moholo's mighty drumming - a South African amplification of some of the wave-like energy-field ideas Sonny Murray had pioneered - coupled with Hazevoet's walloping piano. PLEASURE was issued in an unusually small batch - 250 copies, each with a hand-silkscreened cover - but a few made their way into journalists' hands and garnered some glowing reviews, which made the prospect of continued work favorable. Since Moholo was based in London and was frequently busy with other groups, like Chris McGregor's Brotherhood of Breath, it wasn't always possible for Hazevoet and Wanders to use him, so various other drummers were drafted, including Han Bennink, Paul Lovens, Noel McGhee and Martin van Duynhoven. Other musicians joined the Hazevoet-Wanders group over its few years' lifespan, including trombonists Willem van Manen and Radu Malfatti, and bassist Robert Scholler (a rare improvisor from Luxembourg). Hazevoet fondly recalls the introduction of Jean Vandenplas, a violinist and cellist brought into the group by Wanders. (After Wanders and Hazevoet split, Kees worked with Vandenplas in other contexts, including an enticing trio with Han Bennink.) Hazevoet's description of Vandenplas says a good bit about his musical interests: "Obsessive player with a good hysterical string sound. Also an entirely uncommunicative character - during some four years of playing we hardly exchanged more than ten words with each other. Good!"
Not long into the '70s, Wanders changed from alto to tenor saxophone. Hazevoet and he continued working together until the end of 1973. Hazevoet played with Moholo on and off for the pianist's remaining years in jazz; the drummer appears, for instance (alongside Bennink) on the 1976 Haazz & Company concert recording UNLAWFUL NOISE (issued on KGB Records, reissued on Unheard Music Series). Moholo remains as virtually the only living member of the South African new jazz scene, and he continues to make vibrant sounds, even as his countrymen have met such untimely ends. Hazevoet left music in 1980 to pursue another life in the zoological sciences, but not before documenting his long and fruitful relationship with percussionist Han Bennink on an LP titled CALLING DOWN THE FLEVO SPIRIT.
~ John Corbett, Chicago, November 2003 ~ atavistic.com
Лог создания рипа
Содержание индексной карты (.CUE)
auCDtect Task Manager
... релизы с участием KRIS WANDERS на трекере ...
Any questions -> support@pro-jazz.com. По всем вопросам пишите -> support@pro-jazz.com
—
185
M0p94ok
Нет комментариев. Ваш будет первым!
Войдите или зарегистрируйтесь чтобы добавлять комментарии