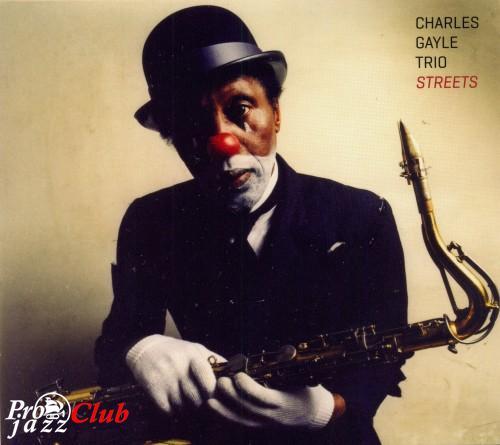 Треклист:
Charles Gayle Trio / Streets
Жанр: Free Jazz
Носитель: CD
Страна-производитель диска (релиза): US
Год издания: 2012
Издатель (лейбл): Northern Spy
Номер по каталогу: NSCD 018
Аудиокодек: FLAC (*.flac)
Тип рипа: tracks+.cue
Битрейт аудио: lossless
Продолжительность: 60:30
Источник (релизер): cd
Наличие сканов в содержимом раздачи: нет
Треклист:
1. Compassion I (5:16)
2. Compassion II (6:43)
3. Glory & Jesus (9:12)
4. Streets (10:34)
5. March Of April (9:25)
6. Doxology (10:47)
7. Tribulations (8:32)
Лог создания рипа
Содержание индексной карты (.CUE)
Доп. информация: Recorded May 2011 at Seizures Palace Recording.
Об альбоме (сборнике)
The title of the new Charles Gayle studio record, Streets, doesn't refer to the asphalt roadways on which Gayle used to play his saxophone; it refers to the clown-mime persona Gayle sometimes adopts in performance. Of course, by way of immediate association, the figure of Streets also reminds us of the streets where this persona was born: Streets the Clown, a near-homeless performer (as indeed Gayle was before he was “discovered”) living in the concrete jungle of New York, turning his sadness, pain, and perseverance into art. There's Gayle as Streets on the cover, looking forlorn, but staring right at us.
How are we to respond to this gesture? The album’s Christian-themed titles suggest “Compassion” might be appropriate. But there’s always the sense that such humility will come to nothing. Indeed, the movement of the record is from alternating versions of “Compassion” to the final “Tribulations,” the noisiest and unruliest of the bunch. This might be Gayle’s narrative: humble compassion will inevitably have to confront an apocalyptic upheaval. In this context, the performer is none other than a clown who attempts to bring joy, but in a world faced with constant travail must resign himself to being overlooked or forgotten. His melancholy-turned-(out)rage is the plight of the outsider artist—the free jazz musician in a nutshell.
Gayle is now in his 70s, but he is as intense as ever. His choice of trio and the exclusive use of the tenor may remind listeners of his most well-known record, Touchin' on Trane. And yet, surely in part due to the different rhythm section, Gayle does not repeat himself here: the Ayler-infused Coltrane sound of that album is not as prominent. Gayle trades those lengthy, lyrical lines for halting, disjointed outbursts. On this record his playing is much closer to the tortured, jagged wails that can be found on the extraordinary More Live album that was recorded in New York the year Touchin' on Trane was released—19 years ago.
The rhythm section on Streets is superb. Larry Roland plays the upright bass, and Michael TA Thompson is on drums. Both of them are accomplished musicians, and both are given ample time to show that. Each player has a solo on all but one track, and, most importantly, both of them are recorded extremely well. The subtleties of their interactions with each other and with Gayle are clearly distinguished in the mix, making it even more of a delight to listen to them.
The record is about an hour long, and features seven tracks ranging 5-10 minutes in length. Some pieces are more forceful and blustering; others ruminative yet still afflicted. Gayle’s overblown squeals often sound like he’s holding something back, that the high-pitched yelps are the symptoms of restraint, as if always about to explode into deeper, more violent attacks. And these outbursts come, sometimes ratcheting up the trio’s intensity to a peaking point. The ten-minute title track is especially effective, with Roland bowing his instrument (as he does on only one other piece) and featuring a musical theme that sounds like a lament. "March of April" begins with military-style syncopation on the drums, with the bass soon following 'in step.' Gayle enters and at first follows this lock-step rhythm, but in a few minutes it's clear the roles have been reversed: Thompson and Roland are now following Gayle's lead as he pulls the rhythm section away from any regulated beat and into a free textured flow. At the end the trio settles back into the military march for the final minute. This frame works beautifully and powerfully showcases Gayle's musical range. It's a fantastic piece, maybe the best on the record.
Состав
Bass – Larry Roland
Drums – Michael TA Thompson
Tenor Saxophone – Charles Gayle
По всем вопросам пишите личное сообщение пользователю M0p94ok.
—
168
M0p94ok
Нет комментариев. Ваш будет первым!
Войдите или зарегистрируйтесь чтобы добавлять комментарии