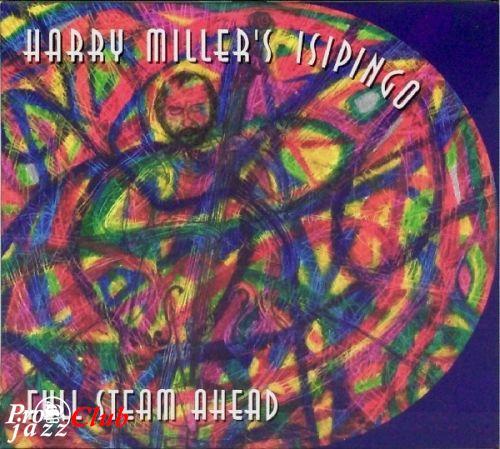 Треклист:
1 When Hey! 14:35
2 Good Heavens Evans! 11:58
3 Family Affair 5:59
4 Children At Play 9:26
5 Dancing Damon 9:52
Лог создания рипа
Содержание индексной карты (.CUE)
Лог проверки качества
Доп. информация:
Album Info & AAJ Review
Tracks 1, 2: Studio recording - London, February 1975
Track 3: Studio recording - London, 1976
Track 4: Studio recording - London, November 1977
Track 5: Concert recording - London ICA, August 15th 1976
Such is the nature of the reviewing game that some reviews just flow out, taking the perennial word count with it. This is usually because the force of life running through the music under discussion is vibrant enough to make it so, and Full Steam Ahead is a case in point.
If the notion that the 15 years between 1965 and 1980—as arbitrary as that period may seem just like any other—amount to the most fertile period in British jazz to date, then this release underpins it in no small measure. The participation of South Africans such as bassist Harry Miller, trumpeter Mongezi Feza and drummer Louis Moholo-Moholo, all of whom are present here, lent something vibrant to that scene too, as this collection of tracks caught at various times in the 1970s testifies. Isipingo was a blowing outfit in a number of senses, and the band's music was always a simultaneously tight but loose mixture that musicians often talk and dream about but very infrequently capture.
Here, the opening "Whey Hey!" and following "Good Heavens, Evans!" nail that one from the start. Feza and alto saxophonist Mike Osborne, both of whom are sadly no longer with us, always came to do more than play, and they prove it here with their own heady mixtures of fire and skill. The latter manifests itself in the way they show their command of tension-and-release, borne aloft as their efforts are by the downright extraordinary accompaniment of Stan Tracey, whose pianistic approach is sufficiently different to that of the band's regular pianist, Keith Tippett, as to suggest an entire alternative blueprint for working in such a potentially volcanic setting.
"Family Affair," on which Tippett does appear, is clearly a rambunctious affair of like-minded souls, and the point is emphasized by his expansive solo over Moholo's hyperactive snare drum. Trombonist Malcolm Griffiths is an approximate amalgam of Bill Harris and Roswell Rudd, appearing to look both forwards and backwards at the same time. Osborne, as was his way by this time, starts from a point a great many musicians spend twenty minutes trying to locate.
"Children At Play" is an apt title for too many reasons to discuss, especially as it emphasizes that this music can reflect a fundamental joy of life. That is, of course, something in itself. It's the best kind of realization to know that these guys could summon it up so easily, even in the face of life's adversities.
Состав
Alto Saxophone – Mike Osborne
Bass, Composed By – Harry Miller
Drums – Louis Moholo
Piano – Frank Roberts (tracks: 4), Keith Tippett (tracks: 3, 5), Stan Tracey (tracks: 1, 2)
Trombone – Malcolm Griffiths (tracks: 3, 4), Nick Evans (tracks: 1, 2), Paul Neiman (tracks: 5)
Trumpet – Mark Charig (tracks: 3 to 5)
Trumpet [Pocket Trumpet] – Mongezi Feza (tracks: 1, 2)
Any questions -> support@pro-jazz.com. По всем вопросам пишите -> support@pro-jazz.com
—
169
M0p94ok
Нет комментариев. Ваш будет первым!
Войдите или зарегистрируйтесь чтобы добавлять комментарии