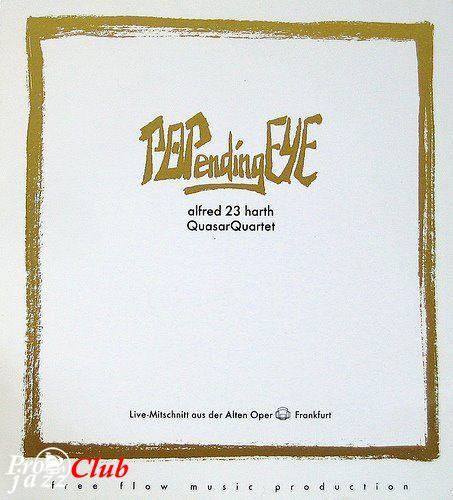 Треклист:
1. 1st2nd3rd&4th 29:18
2. BukzokWestWostokSude 29:38
Лог создания рипа
Содержание индексной карты (.CUE)
Лог проверки качества
Доп. информация:
Album Info & Review
All compositions: Alfred 23 Harth, Simon Nabatov, Vitold Rek, Vladimir Tarasov
Thanks to: Uwe-Karsten Koch, Dr. Olshausen, Gallustheater, Musik-Glier
Vitold Rek plays Corelli strings
Live-Mitschnitt aus dem Hindemith-Saal der Alten Oper Frankfurt, 5. Dezember 1992
Ton: T. Raisig
Production: S. Siebenlist
Design by F. Simmel at Studio Schneider, Frankfurt
Alfred 23 Harth photo: Soon Joo Lee
"I want more POPEYE", writes Alfred Harth. "Possessing uncompromising moral standards and resorting to force when threatened". He also refers to "my artist's way through postmodernism", which at the beginning of the 90s brought him to grow tired of "all those mixes, remixes, postmodernisms and pop" that he had gone through during the previous decade: he was ready to return to a "pure" approach, essentially based on real players and real instruments. Enter Russian drummer Vladimir Tarasov from the Ganelin Trio, a long-time admirer of Harth, met for the first time in 1992 when Mr.23 was invited by Moscow TV for a program about him; the next character after his portrait would be none other that Popeye the Sailor (hence the album's title, a word game with the ironical "end" of the "pop phase" of Alfred's career). Tarasov had imported all the early Harth albums in the USSR, contributing to make him a Michael Jackson-like star in the Northern area of the country; playing together became a necessary consequence. The QuasarQuartet, formed by the saxophonist in the same year, sees Harth on tenor sax and bass clarinet and Tarasov on drums and percussion, plus the fabulous pianist Simon Nabatov and the excellent Vitold Rek on bass. "POPendingEYE" features two half-hour tracks in which everything (Coltrane-derived ascensions, logical freedom, contaminations of marching band rhythms, folk melodies, pyrotechnical pianism, sadly pensive reed lines) obeys to a logic that's inspired by Harth's idea of "opening to the East": in fact, besides this new musical situation, he met his current partner - South Korea's visual artist Soonjoo Lee - right at that time (hers is Alfred's photo gracing the digipak). Even the track titles, "1st2nd3rd&4th" and "BukzokWestWostokSude", respectively refer to the world's divisions ("...we know what the 3rd world is, but which would be the 1st?" says Harth) and to a mixture of Korean and English language to describe directions. And many directions this music points at, with a stimulating alternance of high-charge improvisations and melodic crystals that doesn't remind us about the players' originary lands, but it rather stands as a primary example of reciprocal instant comprehension: no language is a barrier when the instruments are the ones doing the talking. "POPendingEYE" - a meaningful record in the free music scene of the early 90s - has remained pretty obscure despite its quality; but it sure helped Alfred Harth to be "strong to the finish", as the Sailor himself would have it. The fact is, his creativity shined then and it still does. What finish, then? And what's your favourite brand of spinach, Alf?
Состав
Alfred 23 Harth: tenorsax, bassclarinet
Simon Nabatov: piano
Vitold Rek: bass
Vladimir Tarasov: drums & percussion
По всем вопросам пишите личное сообщение пользователю M0p94ok.
—
214
M0p94ok
Нет комментариев. Ваш будет первым!
Войдите или зарегистрируйтесь чтобы добавлять комментарии