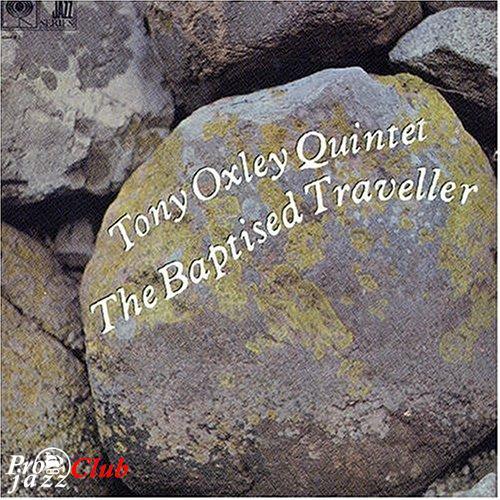 Треклист:
Tony Oxley Quintet - The Baptised Traveller (1969) {CD re-issue 1999}
Жанр: Free Jazz, Avant-garde, Free Improvisation
Страна-производитель диска: UK
Год издания диска: (1969) 1999
Издатель (лейбл): Columbia Records
Номер по каталогу: 494438 2
Аудио кодек: FLAC (*.flac)
Тип рипа: tracks+.cue
Битрейт аудио: lossless
Продолжительность: 00:38:51
Источник (релизер): GatoMedio
Наличие сканов в содержимом раздачи: нет
Треклист:
01 - Crossing -- Arrival [Tony Oxley] 17:37
02 - Stone garden [Charlie Mariano] (17:10)
03 - Preparation [Tony Oxley] (04.04)
The Players:
* Evan Parker - tenor saxophone
* Kenny Wheeler - trumpet, fluegelhorn
* Derek Bailey - guitar
* Jeff Cline - bass
* Tony Oxley - drums
Лог создания рипа (EAC Log)
Содержание индексной карты (.CUE)
Об альбоме
Though in hindsight many followers of British jazz and free improvisation are well aware of the impact that artists like Evan Parker, Derek Bailey and Tony Oxley have had on the course of modern creative music, the original liner notes on this, Oxley’s first album as leader, point to a presentation of new music by none other than Ronnie Scott’s preferred house drummer. Indeed, shortly before The Baptised Traveller was released, Oxley appeared alongside Kenny Clare on Scott’s Live at Ronnie Scott’s (also reissued by British Columbia). Fans of Britjazz in 1969 might have been more likely to expect a session firmly in the annals of straight-ahead jazz a la the Scott-Tubby Hayes model, or at most a Joe Harriott, than the staunchly avant-garde.
The carefully chosen band includes stalwart bassist Jeff Clyne, who had recorded with Hayes, Scott, and John Stevens, as well as trumpeter Kenny Wheeler (a ‘cool’ stylist at the time) and then- unfamiliar names of saxophonist Parker and guitarist Bailey (who makes his first recorded appearance here). Yet what listeners then and now are presented with is a session of improvised music that is, if not quite the “[expletive] uttered in a cathedral” that Albert Ayler was for poet Ted Joans, still a profound display of new terminology in the language of European jazz.
The album is taken up with two lengthy tracks and a third short piece; the first a suite composed by Oxley, followed by a lengthy take on Charlie Mariano’s ballad “Stone Garden,” and cinched up by the brief, jagged and mostly improvised “Preparation.”
The first part of the suite, “Crossing,” is at the outset a solid free-bop tune that might seem like the quirky English cousin of a Sonny Simmons side, but the harmonic rafting trip that follows – through vicious tenor solos and complex rhythmic and melodic interaction, as well as the introduction of a variety of thematic snatches – firmly plants a contrasting level of organization in the listener’s brain that will not likely be forgotten. “Arrival,” the companion piece in the suite, expands on the nuances found in the slower passages of “Crossing,” harking forward to the type of open form improvisation one might find on an Incus release.
If all this isn’t enough, the group’s take on “Stone Garden” is exquisite, and whereas the first two pieces are quartet, this piece adds Bailey’s guitar in what might now seem like an uncharacteristically subdued fashion. The subtle facets of this ballad are explored in great detail – horns voiced as though they were at a wake and Bailey providing “drone comping” behind the soloists. Parker’s solo is movingly mournful, in stark contrast to the gnarled multiphonics he applies on the introductory suite.
Two things are unmistakable here: firstly, this is group music of the highest order, and secondly, that rigorous structure yields the greatest improvisational freedom. Though The Baptised Traveller might seem a conservative step for its participants – a far cry from later projects – it is in reality a swan song for the known possibilities of mainstream jazz, and an exuberant cry for the unknowns of the avant-garde. ~Clifford Allen, allaboutjazz.com
По всем вопросам пишите личное сообщение пользователю M0p94ok.
—
189
M0p94ok
Нет комментариев. Ваш будет первым!
Войдите или зарегистрируйтесь чтобы добавлять комментарии