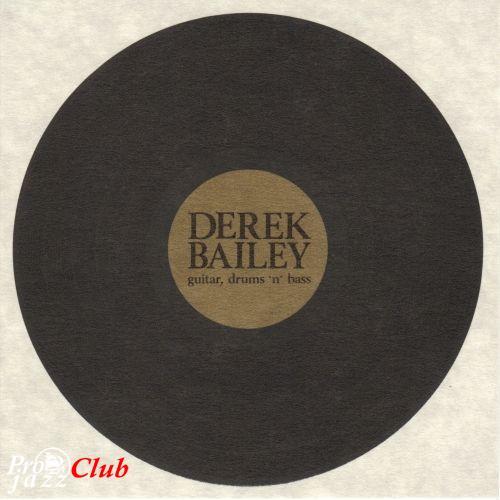 Треклист:
1 N/Jz/Bm (Re Mix) 3:33
2 Re-Re-Re (Up Mix) 1:35
3 Dnjbb (Cake Mix) 13:46
4 Concrete (Cement Mix) 7:02
5 Ninj (De Mix) 11:29
6 Pie (Amatosis Mix) 1:38
Лог создания рипа
Содержание индексной карты (.CUE)
Лог проверки качества
Доп. информация:
AMG Review
Derek Bailey, who was in his mid-sixties when this disc was released in 1996, is generally recognized as the elder statesman of avant-garde guitar; his former students include the hugely influential Fred Frith, and he has made particularly notable records with Evan Parker, Steve Lacy and John Zorn. He mostly records on his own Incus label, but for this album on Avant he teamed up with DJ Ninj, a well-regarded drum'n'bass artist, to create what may be the first program of guitar/breakbeat duets. It's a brilliant idea, and one that should have worked much better. As it turns out, the problems are as much technical as musical: Ninj's beats are thin-sounding and mixed too far back, giving the percussion sound a certain off-hand flavor. Bailey plays with his usual ferocity, skirling out ideas at such a rate that it's hard to keep up -- at times, he even plays in tempo with DJ Ninj's double-speed breakbeats, a feat that is impressive physically, not to say musically. But in other places he sounds hesitant, as if baffled by the clattering torrent of rhythm. The programming itself is a little perverse: "DNJBB" is a long, episodic piece with frequent silences that make it sound as if four or five consecutive tracks had all been written on the same breakbeat. There are many valuable and exhilarating moments here, but it's frustrating to think how much better this disc could have been if more care had been taken with it.
Состав
Derek Bailey, electric guitar.
D.J. Ninj, programming.
Bass and drums recorded spring 1995 in Birmingham, England.
Guitar recorded September 1995 at Bill Laswell's studio, NYC.
По всем вопросам пишите личное сообщение пользователю M0p94ok.
—
193
M0p94ok
Нет комментариев. Ваш будет первым!
Войдите или зарегистрируйтесь чтобы добавлять комментарии