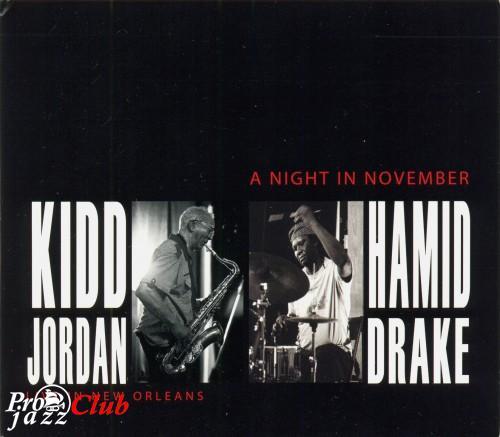 Треклист:
Kidd Jordan & Hamid Drake / A Night in November (Live in New Orleans)
Жанр: Free Improvisation, Free Jazz
Носитель: CD
Страна-производитель диска: US
Год издания: 2013
Издатель (лейбл): Valid Records
Номер по каталогу: VR-1015
Аудиокодек: FLAC (*.flac)
Тип рипа: image+.cue
Битрейт аудио: lossless
Продолжительность: 70:12
Источник (релизер): CD
Наличие сканов в содержимом раздачи: нет
Треклист:
Set One
1. Alto and Drums 11:03
2. Drums 2:47
3. Tenor and Drums 23:28
4. Tenor - Wade In The Water 3:53
Set Two
5. Tenor and Drums 29:02
Лог создания рипа
Содержание индексной карты (.CUE)
Об альбоме (сборнике)
"And to think 15 years ago there were hardly any Kidd Jordan albums! The documentation of musicians involved in the various tributaries of improvised music exploded in the late 1990’s and early-ought’s, in part due to lowering cost of recording equipment and CD production, but also serving as evidence of Improvisation’s practical, utilitarian nature – musicians could even meet for the first time and record an album’s worth of material in an afternoon, such was the skill level and shared understanding of the major players. A LOT of great musicians were finally given opportunity to present multiple facets of their work to the wider world, giving future scholars of the music vast amounts of material to study, but too often this market-flooding approach resulted in the contemporary equivalent of the bebop “blowing session” – skillfully-executed music by seasoned professionals doing what they know how to do very well, but with only occasional flashes of genuine surprise or revelatory, sublime music that demanded repeated listening.
Kidd Jordan’s discography now numbers well into the dozens, but this recording stands out because he has never been recorded in a setting with this much space, with Hamid Drake’s elegant drumming creating a marvelously open canvas. Kidd rarely plays in this stripped-down setting, preferring to have other harmonic instruments to “give me something to play off of,” coming as he does out of obsessive practice with pitch relationships. Kidd typically plays in groups with piano and bass, but the only duo-with-drums performance in memory is a concert with Andrew Cyrille that I organized in New Orleans in 1998. Kidd’s tenor playing may include multiphonics, piercing altissimo, and other timbral extremes, but his primary focus is still on the notes and how they relate to each other and their surroundings. In this sense Hamid is an ideal duo partner, coming out of the Ed Blackwell approach to melodic drumming (careful tuning of the drums is important here). But I also hear commonalities with West African talking-drums and perhaps most significantly Hamid’s tabla studies. In Indian classical music the tabla plays definite pitches that relate to the rag. Hamid’s drumming here is, in a sense, not too far from that approach, so precise and sympatico are his responses to Kidd’s phrasing.
The saxophone-drums duo is one of creative music’s most effective and enduring combinations, with John Coltrane & Rashied Ali’s “Interstellar Space” setting the bar high from the outset (1967). Ali followed this in 1972 with the explosive “Duo Exchange” with Frank Lowe, and since then many greats on both sides of the Atlantic took up the challenge with wonderfully diverse results: Evan Parker & Paul Lytton, Jimmy Lyons & Andrew Cyrille, Peter Brötzmann & Han Bennink, David Murray & Milford Graves, Mats Gustafsson & Paul Lovens, to name a few. Hamid has contributed more than most to this continuum via significant duos with Brötzmann, Joe McPhee, Frank Gratkowski (documented on Valid Records), and Fred Anderson.
The spirit of Fred Anderson loomed over this session, being longtime friend to both, mentor to Hamid, and sax-comrade to Kidd. The two met through Fred and played in his groups at least as far back as the early 90’s. The day after this recording Kidd and Hamid hit the studio again with bassist Joshua Abrams and trombonist Jeff Albert for a quartet session that included two Fred compositions (Jeff Albert’s Instigation Quartet “The Tree on the Mound” on Rogue Art). One could say that Hamid learned the art of powerfully gentle accompaniment on evidence here under the tutelage of Fred, and there is something of Fred’s obsessively patient manner of worrying away at a phrase in Kidd’s playing here – most uncommon as you would never mistake Kidd’s playing for Fred’s or vice-versa (listen to “Two Days in April” on Eremite for proof!). By being so ineffably themselves, they pay honest tribute to their friend.
The other distinctive quality of this session results from the setting and environment. Most CD’s of improvised music are either straight documentation of live concerts or studio sessions in which some deliberation over the type or length of the pieces is employed. The music here rather, was recorded in a studio but with an audience in attendance, providing the detailed fidelity of a studio recording AND the heightened sense of occasion that comes with a roomful of expectant listeners. No stopping and restarting multiple takes. What you hear is as it was played in real time.
Piety Street studio has a lovely main room with high ceilings and ample space for the musicians plus 90 seats for the listeners. It was a lovely autumn in New Orleans and the neighborhood was crackling with activity due to the nearby Music Box installation performances, at which Hamid appeared. Kidd began on alto saxophone, uncharacteristic for him in recent years even though it was his first horn. Over the course of the 40+ minutes of the first piece he works every phrase through multiple permutations and punctuates with speech-like interjections and screams. The tenor works its way in as Hamid alternates supportive shading with energetic rhythms pushing forward. Throughout you will notice how both the musical ideas and the sound quality are clear and articulate. The rapport congenial, but fierce when called for. The joy between these two men is obvious and easily heard."
Состав
Kidd Jordan-alto saxophone, tenor saxophone
Hamid Drake-drums
По всем вопросам пишите личное сообщение пользователю M0p94ok.
—
117
M0p94ok
Нет комментариев. Ваш будет первым!
Войдите или зарегистрируйтесь чтобы добавлять комментарии