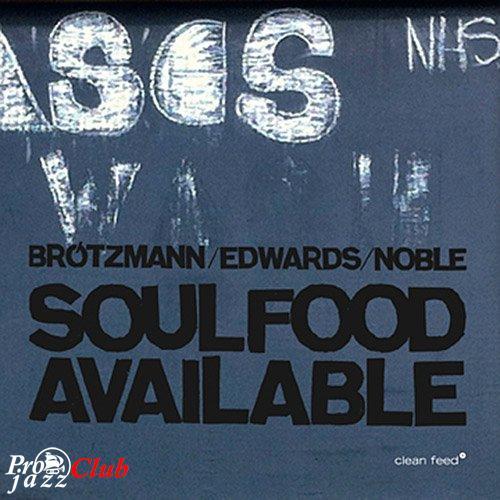 Треклист:
BROTZMANN/NOBLE/EDWARDS
SOULFOOD
AVAILABLE Жанр: Free Improvisation, Free Jazz, Avant-Garde
Страна-производитель диска (релиза): Portugal
Год издания: 2014
Издатель (лейбл): Clean Feed
Номер по каталогу: CF316
Аудиокодек: FLAC (*.flac)
Тип рипа: tracks+.cue
Битрейт аудио: lossless
Продолжительность: 58:20
Источник (релизер): спасибо 6060842
Наличие сканов в содержимом раздачи: нет
/Треклист/
1. Soulfood Available
2. Don't Fly Away
3. Nail Dogs By Ears
Лог создания рипа
Содержание индексной карты (.CUE)
Об альбоме
Listeners often ask where to begin listening to the music of Peter Brötzmann. Recording for nearly 50 years (yes, five-0), he has amassed a discography that totals nearly 300 recordings. Do you start back in the Machine Gun days and his work with FMP, fast forward to Material and Last Exit or his grand projects, the Chicago Tentet and Sonore with Ken Vandermark and Mats Gustafsson?
The answer is that his career is like a river. While you cannot step into the Rhine, the Rhone or the Monongahela in the same place twice, any where you drop a needle or press play on a Brotzmann date is an immersion into the depths of his music. The live trio date is a fine place to start or continue, for that matter, with the Brotzmann experience.
This live date from the Ljubljana Jazz Festival in 2013 finds the saxophonist with the London improvisers John Edwards (bass) and Steve Noble (drums). Their very first meeting in 2010 is documented with The Worse the Better (Otoroku, 2012) and the trio also recorded a smoking set with the addition of Brotzmann's dup partner Jason Adasiewicz (Otoroku, 2014).
The three scorch this nearly hour long set opening with Brotzmann's trademark thunderous tenor sound. The saxophonist favors energy drummers and juggling bassists that can keep the musical balls constantly in the air. Edwards and Noble, who have been heard with Joe McPhee, Akira Sakata, Alan Wilkinson, and Lol Coxhill are certainly up for the task. The music is presented as a 43-minute title track and two shortish improvisations, is both primordial and Ellingtonian. Those seemingly disparate concepts make sense here. Brotzmann blows an untamed saxophone, b-flat clarinet, or taragato, as if it were the first notes ever sent forth. But he also crafts his improvisations not unlike a Duke Ellington suite. Segments of ferocity are contrasted by bluesy sections, and energy parts are set off against introspective passages. This recording should be compared to Songlines (FMP, 1991) with Fred Hopkins and Rashied Ali. Brotzmann displays just as much energy and perhaps even more creativity. (Mark Corroto, AllAboutJazz)
Состав