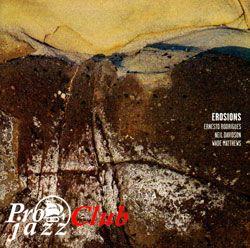 Треклист:
1. untitled 8:24
2. untitled 3:27
3. untitled 5:56
4. untitled 6:20
5. untitled 14:08
Лог создания рипа
Содержание индексной карты (.CUE)
Лог проверки качества
Доп. информация:
Album Info & Review
Recorded on March 9, 2010 at Smiling Cow Studio, Madrid
Mixed and mastered in June 2010 by Wade Matthews at Smiling Cow Studio, Madrid
Photos by Mary Petrosky
Graphic design by Carlos Santos
Produced by Ernesto Rodrigues
Liner notes: Wade Matthews, Madrid, July 7, 2010
Tired and thoroughly fed up tonight for a number of reasons, but the good news is that I have managed to get a week off of work next week, a much needed chance to recharge the batteries a little and sort things out around here, which I haven’t been able to do since the crazy Christmas period. This evening then, after getting home from work quite late I have been able to spend some time with a CD that I have been playing quite a bit since I was generously given it at the weekend. Sometimes its nice to write about a disc quite early, even when the backlog is still quite daunting, and so tonight a few words about the new disc by Ernesto Rodrigues, (viola) Neil Davidson (acoustic guitar) and Wade Matthews (digital synthesis and manipulated field recordings), a CD on the Creative Sources label named Erosions. Caveats out of the way first then- I have worked on a CD with Davidson recently, consider him a good friend and was handed this release while at a concert he organised in Glasgow last weekend. So take all of that into account as you read etc….
Erosions then, (great name for the album by the way) consists of five shortish studio improvisations recorded in Summer 2010. These pieces are, if simply described, great examples of good improvised electroacoustic music recorded by thoughtful, creative people. They are nothing more than this, nothing less. As I have written countless times before, you don’t always have to rewrite the rulebooks to make strong music. You also don’t have to have sold hundreds of records before or be the name that everyone is discussing. Because of the label it is released on, Erosions will doubtlessly be overlooked and/or written off without being listened to. This is a shame as its a really good listen.
The album is a busy, abrasive affair, but of the laminal, textural kind rather than any form of jazz related call and response. Sounds wrench into life and then scorch line across the sounds surrounding them. This isn’t a noisy album as such when considered in the greater scheme of things, but it does have a fiery, jagged edge to it. Davidson’s guitar is acoustic bar the use of eBows, but is recorded up close so that every knock and scratch is amplified, its presence in the music driving the music on into almost aggressive territory. Matthews’ laptop sounds very from ringing tones through to synthesised warbles and squelches, but they are used very nicely, never sounding out of place or too artificial alongside the two acoustic stringed instruments. The field recordings apparently manipulated here are also taken so far out of context that they are unidentifiable from the synthetically created sounds. Rodrigues’ vila in perhaps the most understated of the three parts, preferring to add subtle touches between the other two for much of the time, though equally close-miked there are occasions when it also comes right to the fore.
In his liner notes, Matthews compares the act of natural erosion to the processes involved in making the music as sounds are stripped away, new ones appearing, others altered by new surfaces running across them. These are nice analogies for the music, which has an organic, roughly hewn feel to it, and therefore makes a great disc to delve deep into, poke your ears into every nook and cranny, ride along on the crest of the momentum as everything comes crashing down. The pleasure comes from the interplay between the textural events, how one set of sounds is altered dramatically by the next cutting into it, how one detailed texture is coloured by a new layer of sound sprinkled across it. Following the music through its twists and turns, but also listening vertically down into it is a thoroughly rewarding experience to these ears, and one done best at a reasonable volume.
So a nicely balanced set of recordings that edges on the grainy, gritty side but still has a soft layer folded through it all pieced together with impeccable timing, Erosions is an album by a great trio that I like quite a bit and am very pleased to recommend. My favourite release of 2011 so far. - Richard Punnell, The Watchful Ear
Состав
Ernesto Rodrigues: viola
Neil Davidson: acoustic guitar
Wade Matthews: digital synthesis & manipulated field recordings
По всем вопросам пишите личное сообщение пользователю M0p94ok.
—
289
M0p94ok
Нет комментариев. Ваш будет первым!
Войдите или зарегистрируйтесь чтобы добавлять комментарии