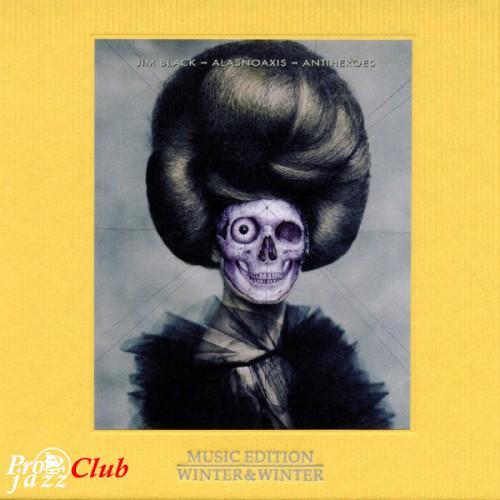 Треклист:
1. Antihero
2. Super K´s
3. Much Better Now
4. Tockle
5. Sun San
6. Marguay
7. Meowchless
8. Square Pegs
Лог проверки качества
Об альбоме
In May 2012 drummer Jim Black started composing music for his new upcoming recording of »Antiheroes« in his house in Brooklyn, NY. In summer of the same year he traveled through Europe and found at friends places the best conditions at a peaceful farm near Salzburg in Austria and in a private house on a beautiful island in Greece. Here – surrounded by quietness and the power of silence – he was able to fully concentrate on his work, he took his guitar and this time also a piano and started writing his songs for drums, saxophone, bass and guitar. The owners of his refuges created the best circumstance and prepared finest meals and drinks. A few months later he recorded the album "Antiheroes" far, far away from Greece in another paradise on Iceland. This record presents music and sound stories about creatures, characters and things who do not just exist but try to make a better world without being afraid to take risks.
»Antiheroes« is a studio production, recorded with the Icelandic musicians Hilmar Jensson (guitar) and Skúli Sverrisson (bass) plus Jim Black's long-standing musical partner Chris Speed (saxophone). These four individual musicians are AlasNoAxis, which is the name of this homogeneous group and "Antiheroes" is their sixth album and Jim Black's seven album as a band leader for Winter&Winter. Stefan Winter produced the recording session near Reykjavík, and Ron Saint Germain (sound engineer of Kraftwerk, Michael Jackson, Ornette Coleman and Soundgarden, to name a few) was responsible for the sound design of the mix.
Jim Black about »Antiheroes«:
My last two recordings for Winter & Winter focused on complete songs and compositions. For our sixth recording with AlasNoAxis, I wanted to create a miniature or a reduction of what happens when we perform a live concert.
A piece of music, an idea, or a short song, chained together by improvisation - arriving from or departing to the next piece of written music. I was looking for more of a through-composed experience - one that didn't cycle back on itself constantly but something that would take the listener from a starting place, only move forward, and never return back to the beginning.
The music was written from May through August of 2012. This was by far the best summer of my life. The music was composed at home in my flat in Brooklyn between traveling through Europe. I spent the summer performing with great bands and going on mini vacations with great friends. Writing songs in this way, the music became a sort of sonic journal, as well as a soundtrack for the mind in my journeys. So many people and places, combined with the interludes of solitude at home, were total inspiration. This also was the first time I wrote on piano in addition to guitar for the band, forcing my harmonic hand a bit deeper into the fire. No strange guitar tunings either.
We recorded the album in Mosfellsbær, Iceland, a small town on the outskirts of Reykjavik. The studio is a converted swimming pool from the 1930’s, and the surrounding land is mysterious and inspires thought of all kinds. I went for a walk on the morning of our first day of tracking, amidst the rolling green hills and waterfalls. I was so taken while discovering the landscape that I managed to get completely lost, and after a tiny panic moment, made it back just in time to start the recording.
"Antiheroes" refers to the characters/creatures/objects in a situation that will end up surviving through, succeeding in, and hopefully, bettering life no matter what the cost.
"Super K's" – For heroine Kazu Makino, vocalist of the band Blonde Redhead, and for our vocalist Chris Speed.
"Much Better Now" – Saudade (desire) is here... you search the source of it. Afterwards Saudade is still there... but at least you know why.
"Tockle" – Broken yet ticking time bomb that can’t detonate.
"Sun San" – Started in my flat in Brooklyn, finished on a rooftop in Greece. Respected sun and sons and sound.
"Marguay" – Colorful internet misspelling attaches itself to the song like the Central/South American wild cat attaching itself to an adoptive owner.
"Meowchless" – Inspired by teen angst I don’t have anymore. The absence of the sound when fortunately not accidentally stepping on a cat.
"Square Pegs" – Everybody has to get along together.
Состав
Jim Black - drums, compositions
Chris Speed - tenor saxophone, clarinet
Hilmar Jensson - guitars
Skúli Sverrisson - bass
По всем вопросам пишите личное сообщение пользователю M0p94ok.
—
164
M0p94ok
Нет комментариев. Ваш будет первым!
Войдите или зарегистрируйтесь чтобы добавлять комментарии