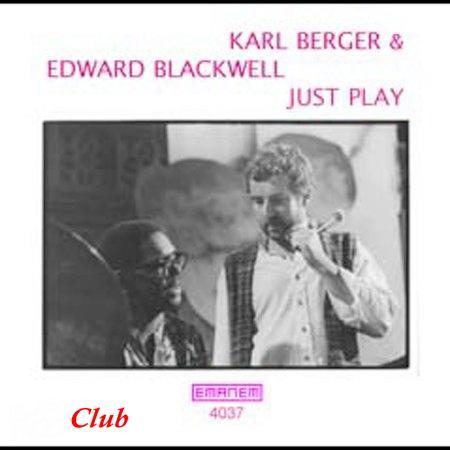 Ed Blackwell
October 10, 1929 – October 7, 1992
Об альбоме (сборнике)
Just Play was first released on LP in 1979 on the Quark label and had been out of print for ages. In June 2000, the British free jazz label Emanem delivered a new edition with one extra cut, a five-minutes tune by Don Cherry.Karl Berger is a master of the vibraphone, but he also touches balafon (an African xylophone) and darbuka on this recording. In addition to the drum kit, Edward Blackwell also plays osi, an African slit drum. These two percussionists met in the mid-'60s, when together with Pharoah Sanders they were part of Don Cherry's band. Just Play seems to be the only recording to document this duo.This is not free jazz in the strict sense. The music remains well organized and firmly anchored in the jazz tradition. Of course, the vibraphone (and the balafon, for that matter) is not an instrument with which you can experiment with a lot on noises, split-tones and other techniques that are now clich‚s in improvised music. Therefore, the music here, although it feels freed from the concept of tonality, remains "musical", even melodious, and Blackwell always keeps a groove, something strongly in evidence on the track "We Are." This is light, relaxed jazz, pleasant, not thought-provoking, but full of inspiring chops. Oh, and a meaningful source of inspiration for percussionists. ~ Fran‡ois Couture
Состав
Karl Berger - Vibraphone, Balafon, Darbuka
Ed Blackwell - Drums, Percussion [Osi-drum]
По всем вопросам пишите личное сообщение пользователю M0p94ok.
—
165
M0p94ok
Нет комментариев. Ваш будет первым!
Войдите или зарегистрируйтесь чтобы добавлять комментарии