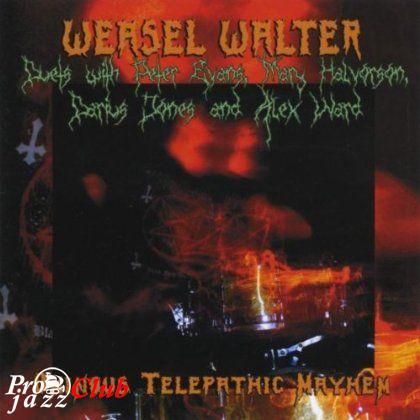 Треклист:
1 Showering With Beer 8:16
2 Grannytram 6:45
3 Free Sometimes Rules 6:56
4 Let's Get 'Em 4:53
5 HOGS 7:22
6 Clarity 7:51
7 Oracle 11:25
8 Non-Alignment Pact 5:19
9 Final Solution 7:55
10 30 Seconds Over Tokyo 4:38
Лог создания рипа
Содержание индексной карты (.CUE)
Лог проверки качества
Доп. информация:
Squid's Ear Review
Since he first hit as part of the burgeoning Chicago scene in early '90s, Weasel Walter has been an omnivorous force, blurring boundaries between his musical passions based equally in free jazz, No Wave, and noise metal. Since moving to Brooklyn a few years back, he's been able to regularly join forces with a broad range of musicians from veterans like Marc Edwards to Peter Evans and Mary Halvorson (with whom he recorded a solid trio excursion for Thirsty Ear.) This round-up, on his ugEXPLODE label, captures a series of duets recorded between 2008 and 2011 with Weasel on drums pairing off with Evans, Halvorson, alto saxophonist Darius Jones, and London-based guitarist/clarinetist Alex Ward.
The first duo with Evans starts out in a familiar free jazz vein, with the trumpet player's flurries and smears dive-bombing against Weasel's crashing cascades. While certainly informed by the vocabulary mined by Cherry and Blackwell or Bowie and Philip Wilson, the improvisations have a rambunctious edge fueled as much by a rock momentum as by tuned polyrhythms, as well as a propensity to explode into shuddering fields of noise (I dare anyone to peg Evans' amped and overblown instrument as a trumpet when he starts shredding midway through the first cut.) The three improvisations with Halvorson are more angular, splintered affairs, though she too pulls out raw agitated, overdriven distortion that gets tossed in with dark buzzing chords and fractured, twanging guitar and jangling harmonics. At times, the interactions sound a bit tentative, as if the two are feeling out which direction to move, but there's still plenty of spirited energy to carry things through. In many ways, Darius Jones is the most tradition-bound of his partners, hefting a burly alto tone and vocalized phrasing against his partner's clattering undertow, which brings out a caterwauling rhythmic flow to their pieces.
Certainly one of the highlights of the recording is the energy fueled sparring with Alex Ward. The three pieces use Pere Ubu tune names but have no particular allegiance to the Cleveland band's themes. For the first piece, Ward straps on his electric guitar and unleashes peals of flayed outbursts against thundering, stomping salvos of Weasel's drums. Next up, Ward goads his partner along with searing clarinet playing (some of the most incendiary playing of his I've heard.) Things finish out with skirling shreds of clarinet and Weasel using a reed mouthpiece, ducking and weaving against spattered drums, which then explodes with fusillades of electric guitar squall. While a bit uneven, this recording serves as an effective scrapbook of a restless mind at work with some like-minded collaborators.
Состав
Alto Saxophone – Darius Jones (tracks: 6, 7)
Drums – Weasel Walter
Guitar – Mary Halvorson (tracks: 3, 4, 5)
Guitar, Clarinet – Alex Ward (5) (tracks: 8, 9, 10)
Trumpet – Peter Evans (2) (tracks: 1. 2)
Tracks 1 and 2 recorded September 22, 2008.
Tracks 3 through 5 recorded March 7, 2009.
Tracks 6 and 7 recorded August 23, 2010.
Tracks 8 through 10 recorded July 2, 2011.
По всем вопросам пишите личное сообщение пользователю M0p94ok.
—
128
M0p94ok
Нет комментариев. Ваш будет первым!
Войдите или зарегистрируйтесь чтобы добавлять комментарии