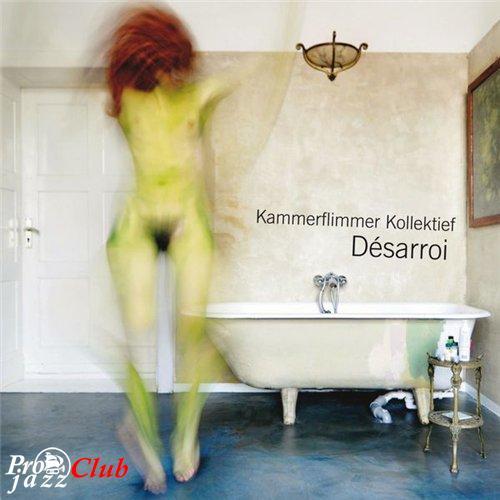 Треклист:
Kammerflimmer Kollektief
' ' ' ' ' ' ' ' ' ' ' 'Désarroi Жанр: Avant-Garde Jazz, Future Jazz
Год издания: 2015
Издатель (лейбл): Staubgold
Номер по каталогу: 136
Страна исполнителя (группы): Germany
Аудиокодек: FLAC (*.flac)
Тип рипа: tracks
Битрейт аудио: lossless
Продолжительность: 41:36
Источник (релизер): WEB (спасибо numnumjuice)
Наличие сканов: front
Треклист:
1. Désarroi #1: Mayhem!
2. Désarroi #2: Grundstürzend
3. Free Form Freak-Out
4. Evol Jam (Edit)
5. Désarroi #3: Burned
6. Désarroi #4: Unlösbar
7. Désarroi #5: Saumselig 2
8. Zurück zum Beton
9. Désarroi #6: Mayhem! (Reprise)
Лог проверки качества
Об альбоме
The art of Kammerflimmer Kollektief is deception. It is a persuasive and seductive art, resulting in incorrect assessments and doubtful perceptions. It is an art of disorientation and misdirection. In the Kollektief’s current production Désarroi (disorientation), their 10th and wildest album, they do it again: Welcome to the Kammerflimmery!
Right from first track, the Kollektief leaves its referential indicators. Heike Aumüllers free, unsentimental Harmonium played with a Sehnsucht (like a Free Jazz counterpart to Reggae producer and Melodica master Augustus Pablo, north of the Kaiserstuhl, not east of the river Nile), followed by Johannes Frisch’s magic double-bass, creaking and free-wheeling. Shortly after a dash of Swedish Biker- Rock passion, that makes you forget the benedictions of modernity – for a moment at least – until we come to the end of Désarroi, where we are brought back into the blessings of concrete-solid realities.
Clear articulated comprehensibility is definitively not one of the aims of the Kollektief’s sign systems. Rather, it masters the ancient art of secret-keeping, and it does it in times in which everyone reveals all of their intimacies without asking the rest of humanity whether or not we’d like to know them. The Kollektief clips musical and cultural fragments out of their cultural frameworks and pieces them enigmatically together. They have worked on this amalgam of FX-cultures, Psychedelica, Free Form, Dub, Improv, and ritual activities for a long time. These elements are gradually connected and placed in an opaque, vertical system, about as (non-)coherent as the constitutional laws of an alchemistic proto-science can be. The Kollektief takes only what is of use. And what is of use has usually a mythical crux.
What was once a bass becomes a creak. What was once a voice becomes a phoneme. What was once a guitar becomes a gnarly notion of "something strummed”. At the same time, the special effects that guitarist Thomas Weber extracts from his strange apparati, he masks as unidentifiable. Rather, they are incorporated as the seemingly "familiar" in the singular tone continuum of the Kammerflimmery. The strange, unreal impressions lurking as soundtrack behind these psych, improv, and editing wars might be regarded by the complete outsider as seemingly strange events. Like the shaman, who in the morning simply hangs up his magic roots for drying to prepare them for his nightly ecstatic routines, the Kollektief adds something ordinary and familiar to its rituals. Maybe that’s why they cover "Zurück zum Beton" (Back to Concrete), the 1980 hit by West-German punk legends S.Y.P.H. Here "Zurück zum Beton" is not interpreted as a grim punk anthem, but as an erotic celebration of a life in order, of Alltag and Künstlichkeit – familiarity and artificiality. A tender embrace of the art of sculpting concrete – the technique to shape public spheres. Over there "pure nature”. Over here "mankind”. In between the magic pragmatism of the Kollektief. On Désarroi, in a fashion perhaps even more pronounced than on previous works, the Kollektief is working with a delicate, tender sensibility (And particularly delicate and disorienting is the singing of Heike Aumüller, which has never been heard like this on record before). If tenderness becomes maximally tender, it is also a maximality of radical tenderness. And because of this, Désarroi is possibly the Kollektief’s most radical album to date.
(Werner Ahrensfeld)
Состав