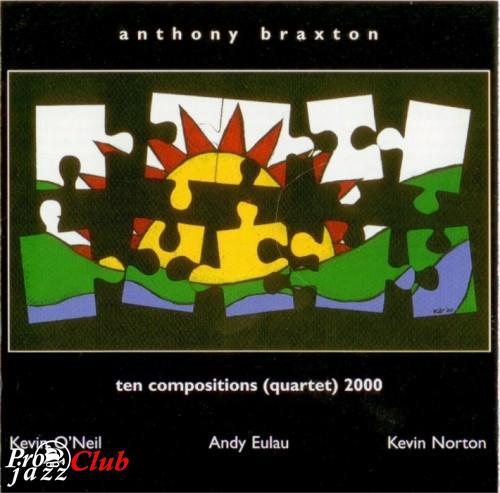 Треклист:
Anthony Braxton / Ten Compositions (Quartet)
Жанр: Avant-Garde Jazz, Free-Jazz
Страна-производитель диска: USA
Год издания диска: 2000
Издатель (лейбл): CIMP
Номер по каталогу: CIMP 225
Страна: USA
Аудио кодек: APE (*.ape)
Тип рипа: image+.cue
Битрейт аудио: lossless
Продолжительность: 63:46
Источник (релизер): basa005
Наличие сканов в содержимом раздачи: да
Треклист
1 Virgo 12:07
2 New Arrival 8:22
3 McNeil Island 2:53
4 Black Monday 5:45
5 C-Bop 10:56
6 Pumpkin - Take 2 5:43
7 Alfred - Take 2 4:32
8 Griots 2:58
9 No Doubt - Take 2 3:13
10 Lo Joe - Take 3 7:13
Доп. информация: Spirit Room Series Vol.113
Recorded at The Spirit Room, Rossie, NY, May 22-23, 2000.
Лог создания рипа
Содержание индексной карты (.CUE)
Об исполнителе (группе)
Anthony Braxton carries with him many of the trappings of genius. A predilection for sudden and unexpected shifts in theoretical and praxical direction, a wholly original and often incomprehensible method of notating his ideas, a tendency to pursue individual innovations to point that many outside observers might deem excess- all of these are part of his artistic and philosophical persona. Given his many idiosyncrasies Braxton has often butted heads with the powers that be both within and without the boundaries of whatever is considered jazz. There have been many detractors over the years that collectively have assaulted everything from the ways he plays his instruments to the ways in which he teaches his students. Through recurring hailstorms of critique he has endured, following his own highly individual course and in the process challenging and changing the fabric of modern music.
In the time I've personally been aware of his music I've become lost or disinterested on numerous occasions, most recently with his epic operatic endeavor Trillium R, which to me was a project ill served by the way in which it was packaged and released. Another area that causes me to continually scratch my head is his seemingly unending Ghost Trance series. But balancing these more enigmatic offerings are such momentous entries as the various documents of his Willisau Quartet with Marilyn Crispell, Mark Dresser and Gerry Hemingway and his earlier quartets with the likes of George Lewis, Dave Holland and Barry Altschul- all seminal stuff by my estimation. Falling somewhere in between these two poles is his new project on CIMP, the first part of which is presented on this disc.
Drawing heavily on the post-bop songbooks of 60s icons Andrew Hill and George Coleman Braxton's quartet almost approximates the sound of a forward thinking Blue Note era hard bop band. Programmatically speaking it has antecedents in earlier projects like his pair of In the Tradition albums for Steeplechase and later tribute vehicles like The Charlie Parker Project and Eight (+3) Tristano Compostions (both on Hat Art). Hearing Braxton's ripe interpretations of these classic compositions is consistently captivating treat. His sound on alto edges deliciously close to soprano range and his acrobatic agility at defying harmonic/melodic strictures is often the only hint at freer leanings. His sidemen two of who are former pupils, fit perfectly into his designs. O'Neil takes on the role of hard bop plectrist, but still evidences the speed and veracity of a plucker well versed in the rigors of free improvisation. Norton moves from colorful texturalist to propulsive catalyst crafting a
variety of engaging rhythms and Eulau often offers up flexible walking support.
As is often his custom Braxton offers ample explanation of his chosen shift in direction in the accompanying liners and his copious reflections make for a very interesting read. Braxtonian purists (is there such a group given the man's relentless reinvention?) may be dismayed by their hero's embrace of hard bop-associated material, but those among them willing to look past the sources will no doubt see indications of his enduring genius. For me it's simply a pleasure hearing him play in a setting that is fresh and vibrant by comparison to some of the other avenues he's been opting for expression of his undeniable talent. Here's hoping that the soon to be released second volume works just as well.
Состав
Anthony Braxton: alto saxophone, flute
Kevin O'Neil: guitar
Andy Eulau: bass
Kevin Norton: drums
По всем вопросам пишите личное сообщение пользователю M0p94ok.
—
196
M0p94ok
Нет комментариев. Ваш будет первым!
Войдите или зарегистрируйтесь чтобы добавлять комментарии