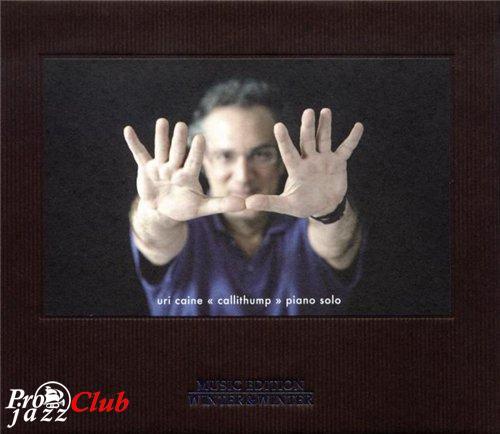 
остальные идентичны
Об альбоме
Description
To come straight to the point: Uri Caine performs and records all pieces of this album in one single pass without an edit, second takes do not exist, everything is made of one cast. This music is full of tension like a unique concert as if performed for one person being alone with the artist in the room.
Uri Caine plays compositions for piano solo on a special Steinway grand piano in the former Power Station recording studio, a room with excellent acoustics and best analog technique. Producer Stefan Winter works with a microphone set-up that allows to record the sound directly to an analog master tape without any artificial reverbration and special effects and without a manipulation of the frequency ranges. Ron Saint Germain, the third man of the team, directs the recording device; especially for this live-to-analog-two-track procedure the sound engineer has a major responsibility as his work determines the specific recording level making the sound saturation unchangeable in the very moment of the recording.
"Callithump" is a somewhat burlesque serenade, an extraordinary parade.
Uri Caine has chosen the title »Callithump« as this word describes a somewhat riotous parade with the blowing of tin horns and other discordant noises and also a burlesque serenade. His oeuvre seems like a walk through the music history of the last 300 years and into the future. The composition Callithump opens this album as a seemingly exuberant, almost grotesque piece with wild sound cascades. In his music Caine repeatedly conceals allusions to other composers' works and jazz soloists. In the second part Jewish motives, which Gustav Mahler used as well, come to light almost imperceptibly. Sepharad is the Hebrew name for Spain, a term describing the Western end of the known world in the Old Testament, which was until the 15th century resort for many Jews after their expulsion from the Holy Land, then the Catholic Church discriminated and banished them. Uri Caine's unmistakeable, lyric playing comes to full effect in Map of the Heart. With virtuosity he introduces Greasy – a slight reference of his respect for Thomas "Fats" Waller – and the rhythmical Chanson de Johnson. In-between these two pieces Caine places the ballad-like The Magic of her Nearness. Continually Caine inserts quotes – sometimes hidden – in order to abandon them again. Bow Bridge is a bridge in New York's Central Park, the railing resembles interweaving circles. With Everything is Bullshit Caine carries on with his burlesque stories, some sounds remember of the Tin Pan Alley, that once used to be full of life in the middle of Manhattan. He strolls through this street and reflects the sounds, coming from open windows, in his music. Raindrop Prelude becomes a wonderful soundscape. Perving Berlin is a little play of words but also a musical game, again Caine adds short, winking citations to his works. This solo album closes with Dotted Eyes and leaves inside the listener still after the last tone an intensive excitement.
BBC
An audacious flurry of activity by Uri Caine has lifted the New York-based pianist to the upper echelons of his trade - and this brilliant solo jazz piano album is testament to both his exemplary compositions and virtuoso playing.
It's broadly high-tempo post-bop, but as with most Uri Caine projects, his range of potential reference points seem limitless. Caine learnt his trade playing jazz whilst studying composition with George Rochberg and George Crumb at University of Pennsylvania. Echoes of a classical heritage can be heard in his jazz reworkings of Wagner, Mahler, Schumann, and Bach of course, but are also inherent in the precision and complexity of his approach. These are all Caine tunes, save a lovely, twinkling rendering of Lennon and McCartney's "Blackbird" and James Von Heusen's "All the Way", revealing a singular talent often submerged in his genre pieces. Here Caine ties his understanding of describing the arc of a piece of music to a gutsy, fearsome jazz technique.
He's melodically strong: "Roll On" has the kind of whistleable central refrain that you're just sure you've heard before. In a piece like "Sonia Said", Caine draws out beautiful, just-the-right-side-of-sentimental melodies which he arranges and improvises around wonderfully, with none of the cloying, self-conscious restraint which occasionally holds back lesser modern players.
Having begun his career recording homages to Thelonius Monk and Herbie Hancock, both players are occasionally recalled here. Keith Jarrett springs to mind more frequently, especially the lovely, bubbling "Country Life" (another pianist tightroping between contemporary classical and jazz). Most of all though, Uri Caine emerges as the unique voice.
In the course of a single piece, say "As I Am", Caine's playing is alternately delicate and reflective, then vivid; vibrant; careening though never chaotic. He seems to rapidly quote several jazz standards amidst the remnants of romantic classical repertoire, before adding punctuation with a sharp dissonant block of notes. Finally there's a brief Cecil Taylor-like onslaught, before resolving so gracefully you barely noticed its exit, stage left.
Fans of contemporary jazz piano can't fail to be won over by Caine's sheer ebullience. Here, with any possible accusations of NYC PoMo winking neatly sidestepped by the format, Caine stands up to be counted and is not found wanting. (Dan Hill)
Any questions -> support@pro-jazz.com. По всем вопросам пишите -> support@pro-jazz.com
—
219
M0p94ok
Нет комментариев. Ваш будет первым!
Войдите или зарегистрируйтесь чтобы добавлять комментарии