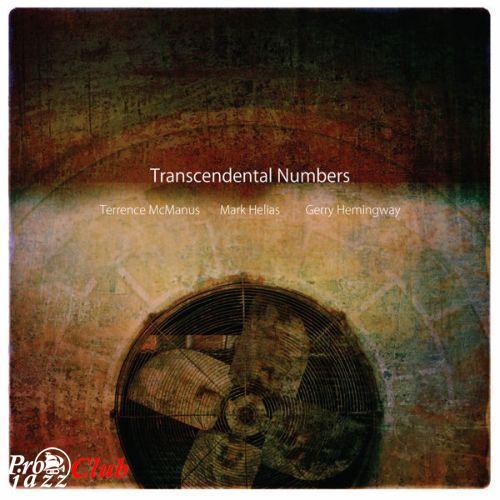 Треклист:
1. Written In The Cracking Of The Ice 6:25
2. Upperside 9:04
3. Junction 12:20
4. Products Of Primes 9:55
5. The Radio Astronomers 12:05
6. When We First Left The Oceans 5:32
Лог создания рипа
Содержание индексной карты (.CUE)
Лог проверки качества
Доп. информация:
Album Info & AAJ Review
All compositions by Terrence McManus, Mark Helias, Gerry Hemingway
Recorded live on January 1, 2009 at The Stone, New York, NY by Joseph Branciforte
Pre-mastering audio editing by Terrence McManus
Photo of Terrence McManus by Lucy McManus
Photo of Mark Helias by Mo Daoud
Photo of Gerry Hemingway by Jordan Hemingway
The guitar played on this recording was built by Terrence McManus
Mastered by Arunas Zujus at MAMAstudios
Design by Oskaras Anosovas
Produced by Terrence McManus and Danas Mikailionis
Co-producer: Valerij Anosov
Liner notes: Terrence McManus, November 2010
Limited Edition of 500 cd's
Guitarist Terrence McManus helms a stellar trio on Transcendental Numbers, through six collective concoctions recorded in New York City's The Stone, straddling and blurring the line between textural improvisation and the more traditional sound of guitar and rhythm section. Brooklyn-born McManus is carving a niche for himself on the scene. Having worked with drummer/composer Tyshawn Sorey, and performed with fellow guitarist Bill Frisell and saxophonist John Zorn, McManus is currently a member of drummer Gerry Hemingway's quintet, and finds his boss returning the favor here.
With an association dating back more than 33 years, the synergy of Hemingway and bassist Mark Helias is a wonder to behold. The pair first came together in the orbit of reed man Anthony Braxton, but they have been featured in each others bands many times since, most notably the cooperative BassDrumBone, along with trombonist Ray Anderson. Alongside their vast experience they also wield an armory of extended techniques which they delve into with gusto, making this a set which would also have been fascinating to witness live.
The breadth of unconventional sounds for guitar trio is reminiscent of guitarist Bruce Eisenbeil with Totem> on Solar Forge (ESP, 2008), though the overall ethos is not one of such complete deconstruction. Even though there are passages when there is no hint of tune, melody or meter, there is still a sense of form and trajectory, whether it is the steadily increasing crescendo of "When We First Left The Oceans" or the bell-shaped curve of "The Radio Astronomers." While the threesome flaunts the intensity of a power trio the density is reduced, so there is lots of air in many of the pieces which allows full appreciation of the constituent parts.
At times the bass and drums slip into their regular roles as on "Upperside" where McManus builds a statement of incisive, insistent phrases and broad slashes over a conversational mid-tempo. Likewise on "Junction" mournful horn-like phrasing from the guitar with blues intimations sparks a loose choppy groove from Helias and Hemingway and an impromptu riff from McManus. "Products of Primes" deals in flinty improv with the bassist's sweeping arco prominent, pitched against white noise guitar and thudding percussion, before evolving into a propulsive churn.
Transcendental Numbers shows where the guitar trio might go without totally severing the links to the instrument's vernacular.
Состав
Terrence McManus: guitar
Mark Helias: bass
Gerry Hemingway: drums
По всем вопросам пишите личное сообщение пользователю M0p94ok.
—
193
M0p94ok
Нет комментариев. Ваш будет первым!
Войдите или зарегистрируйтесь чтобы добавлять комментарии