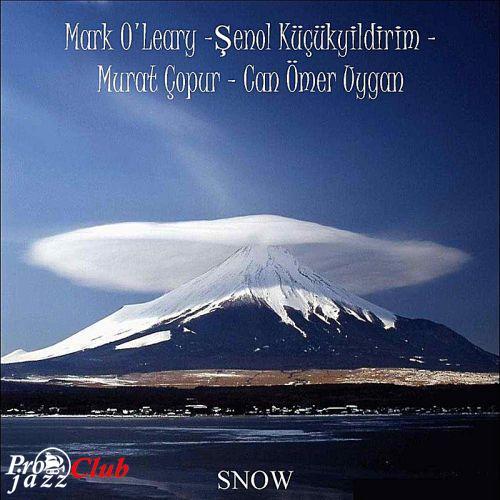 Треклист:
1 Kars 13:37
2 Orhan 5:09
3 Ka 11:32
4 Snow 15:39
5 Ipek 8:48
6 Obsession 6:58
Лог создания рипа
Лог проверки качества
Скриншот спектра частот
Доп. информация:
Album Review
Irish guitarist Mark O'Leary keeps being his nomad self, playing with musicians who generated his interest, and if he started his career by recording with some of the big names in modern jazz (Stanko, Sunny Murray, Wayne Horvitz, Uri Caine, Steve Swallow), he's also explored more ethereal and electronic environments with lesser known musicians.
On this album he joins forces with Turkish musicians Senol Küçükyıldırım on drums, Murat Çopur on bass and electronics, and Can Ömer Uygan on trumpet and electronics. The music is one long sonic exploration, one that develops slowly, without actual rhythm, with tones that are stretched and extended to create eery soundscapes full of tension.
The music is inspired by Turkish Nobel Prize winner Orhan Pamuk's novel "Snow", that tells the story of a journalist marooned in a snowed-in town in the middle of a local suicide epidemic among young women and local elections. The theme is one of freedom against the terror of dogma. I have a tremendous admiration for Pamuk's courage to tempt power resulting in his being put in jail for several years, for his belief in democracy and freedom of speech. His novels are good, certainly above average but still, I think the Nobel Prize for literature is a little bit exaggerated. Anyway, we're reviewing music here.
As with some of his other albums, the slowness of the beginnings starts to gain in volume as the music evolves on "Ka", like a tide rising, or a calm sea turning into a storm, full of drama, with heavy percussion, full reverb wailing guitar, and now fully voiced trumpet. As on some other albums, Terje Rypdal is not too far away in spirit, and that's a compliment, since O'Leary does not really copy him, but rather expands on his idiom.
The title track slows down the tempo again, but certainly not the tension, which becomes incredibly dark and ominous, full of suppressed and expressed angst in an absolutely icy atmosphere. "Ipek", keeps the tension but adds sorrow, sadness and desolation.
The last track, "Obsession", is the best, with changing tempos and ending in hypnotic forward propulsion by the drums and great trumpet playing by Can Ömer Uygan.
Like on some of his other albums, Mark O'Leary again demonstrates that he can get a lot of power and expressivity out of sonic intensity. On some albums he plays speedy guitar solos like most fusion guitarists, but he is really at his best when his focus is on the music as on this album, deeply evocative and expressive. A rare gift.
Состав
Mark O'Leary: guitar
Senol Küçükyıldırım: drums
Murat Çopur: bass, electronics
Can Ömer Uygan: trumpet, electronics
Any questions -> support@pro-jazz.com. По всем вопросам пишите -> support@pro-jazz.com
—
157
M0p94ok
Нет комментариев. Ваш будет первым!
Войдите или зарегистрируйтесь чтобы добавлять комментарии