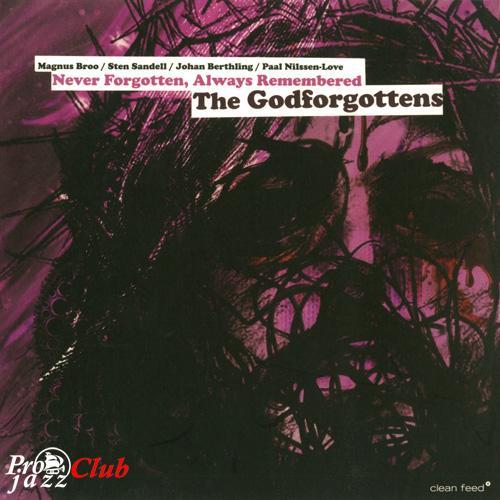 Треклист:
The Godforgottens - Never Forgotten, Always Remembered
Жанр: Avant-Garde Jazz / Free Improvisation
Носитель: CD
Страна-производитель диска: Portugal
Год издания: 2009
Издатель (лейбл): Clean Feed
Номер по каталогу: CF164CD
Аудиокодек: FLAC (*.flac)
Тип рипа: tracks+.cue
Битрейт аудио: lossless
Продолжительность: 00:44:06
Источник (релизер): nnm, Джаз Клуб, 14 марта, 2014 / спасибо mishka1981
Наличие сканов в содержимом раздачи: да
Треклист:
1. Always Forgotten (13:44)
2. Never Remembered (10:31)
3. Remembered Forgotten (19:52)
Доп. информация:
Musicians:
MAGNUS BROO - trumpet
STEN SANDELL - Hammond B3 organ, piano, vocal
JOHAN BERTHLING - bass
PAAL NILSSEN-LOVE - drums & percussion
Recorded at the Atlantis Grammofon, Stockholm, 27th and 28th of March 2006 by Janne Hansson
GODFORGOTTENS - Never Forgotten, Always Remembered cleanfeed-records.com
GODFORGOTTENS - Never Forgotten, Always Remembered allaboutjazz.com
MAGNUS BROO from Wikipedia, the free encyclopedia
STEN SANDELL Official Site
STEN SANDELL from Wikipedia, the free encyclopedia
JOHAN BERTHLING from Wikipedia, the free encyclopedia
PAAL NILSSEN-LOVE Official Site
... back ...
... photo ...
... review ...
The association of trumpeter Magnus Broo with the Sten Sandell Trio was very much intended and searched for, giving continuity to another partnership in quartet: the one with John Butcher heard in the album “Strokes”. But something wasn't planned: the use of a Hammond B-3 organ. The instrument was laying in a corner of the recording studio and Sandell decided on the spot to use it as his main keyboard. With one particularity: he never played a Hammond before. Of course, the music changed radically; not only we feel Broo's influence in all the developments, as the peculiar characteristics of the organ determined a kind of approach rather different from anything done previously by the Sten Sandell Trio. And that's why “Never Forgotten, Always Remembered” is credited to a new band, The Godforgottens. And what a band, reuniting great virtuosos (along with Broo and Sandell, bassist Johan Berthling and drummer Paal Nilssen-Love) who don't choose the easiest way – to exhibit their skills for the egotist pleasure of it. They also have in common the gathering in their musical languages of several stylistic influences, going from classical contemporary music to experimental rock, the axis being hard bop and free jazz. The resulting music is quite a surprise! When you think you've heard everything, here is a CD coming directly from creativity land.
~ cleanfeed-records.com
* * *
A Scandinavian supergroup of sorts, The Godforgottens met for this recording session in 2006 and pianist Sten Sandell happened to spot a Hammond B3 organ in the corner. Having never played one before, he instantly shaped the direction and feel of this performance out of this spontaneous decision to have a go at it. The three musicians joining Sandell - trumpeter Magnus Broo, bassist Johan Berthling and drummer Paal Nilssen-Love - have all collaborated on various projects in the past. This combination might be the first, hopefully, of many for The Godforgottens.
The three lengthy tracks - between ten and twenty minutes - crystallize from the B3, but not as the work of an American jazz/blues organ band. The sound might best be described as the imaginary meeting of Sun Ra and Miles Davis, circa 1974. The opening "Always Forgotten," begins with a placid organ wash, providing an equable current of energy under the unwrinkled tone of Broo's trumpet. With the entrance of Berthling's bowed bass and Nilssen-Love's percussion wash, The Godforgottens create a soundscape in which some very intimate improvisations can be built.
The band adds tension and release within each piece as the river of sound continues on with a seemingly endless number of possibilities. Even when Sandell switches to piano mid-song, the energy sustains itself by way of Nilssen-Love and Berthling's inexhaustible pace. By "Never Remembered," the quartet allows the threads to unravel, opening the music up and jostling the time signature. Sandell accomplishes this by sitting out much of the time; only entering to push players in varying directions. The duo of Berthling and Nilssen-Love heard here expands the imagination, as they seem to create new sounds from their respective instruments.
The nearly twenty-minute "Remembered Forgotten" ends the disc with a trumpet/drum launch. The pair sparks a pulse picked up by piano and bass before the sound spins into free-form musings. When the organ reenters (think of dark clouds overhead), the vibe turns heavy and Broo breaks out his upper register playing to push up the sky. By the end, the exhausted players return to the opening wash of the B3 sound to bring the music full circle.
~ Mark Corroto ~ allaboutjazz.com
Лог создания рипа
Содержание индексной карты (.CUE)
auCDtect Task Manager
Any questions -> support@pro-jazz.com. По всем вопросам пишите -> support@pro-jazz.com
—
155
M0p94ok
Нет комментариев. Ваш будет первым!
Войдите или зарегистрируйтесь чтобы добавлять комментарии