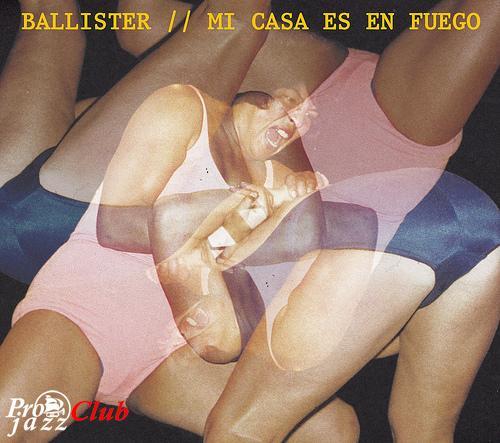 Треклист:
BALLISTER // MI CASA ES EN FUEGO
Жанр: Avant-Garde Jazz, Free Improvisation
Страна-производитель диска: USA
Год издания: 2013
Издатель (лейбл): Self released
Аудиокодек: FLAC (*.flac)
Тип рипа: tracks+.cue
Битрейт аудио: lossless
Продолжительность: 49:36
Источник (релизер): спасибо 6060842
Наличие сканов в содержимом раздачи: нет
Треклист:
1 Cockloft
2 Smolder
3 Phantom Box System
Лог создания рипа
Содержание индексной карты (.CUE)
Об альбоме
Mi Casa Es En Fuego, which means, “my house is on fire” in Spanish, is an appropriate name to call a set of music that’s often aflame, and even in the quieter moments, the embers are still glowing, ready to re-ignite the house again.
That’s just how Ballister rolls, a visceral trio that only makes records extemporaneously and live in front of an audience, and Fuego is no exception. Dave Rempis (alto/tenor/baritone saxophones), Fred Longberg-Holm (cello/guitar/electronics) and Paal Nilssen-Love (drums/percussion) have all performed for both Ken Vandermark and Peter Brötzmann at one time or another, and these major figures of free jazz couldn’t help but to rub off on them. Not to mention Archie Shepp, Julius Hemphill and the whole AACM crowd.
These three group improvisations, each running from thirteen to twenty minutes long, roam from spans of ferocity to passages of rumination and peace, often moving along a bell curve of intensity. The appeal freewheeling improvised music like this comes from its very expressive nature, where the real musical souls of each performer are laid to bare.
Rempis plays alto all the way down to baritone sax, and he can exploit the unique properties of all of them. On “Cockloft,” he plays an abrasive, squeaky tenor sax, staying on the leading edge of the song and wringing out every drop of sweat out of that horn. For “Smolder” he uses the baritone to stab randomly at the spaces, emit jarring drones and unleash anguish and urgency. On “Phantom Box System,” his alto is played most conventionally of all, evoking tradition, but still jumping off into the abyss when the situation calls for it.
Fred Longberg-Holm is among the world’s most experimental and forward-thinking cellists, and if you didn’t know that before, you’d know it after listening to this record. On “Cockloft,” he’s able to effectively assume the role of a metal guitarist and at one point wrings out demonic electrified sounds from it, à la Tom Cora. For “Smolder,” he plays electric guitar instead, which doesn’t sound metal, but during the softer moments, he can be heard playing Joe Morris lines. Back on cello for “Phantom Box System,” he unloads a frantic bowed solo, then follows up a little while later with another solo played pizzicato which equal nerve.
Nilssen-Love glues everything together, and his elite level drum work is easy to notice all over this date. Nilssen-Love is so good at maintaining complex but forceful rhythms while sparring and integrating with the other players; he does that particularly well with Rempis on “Cockloft” and with Longberg-Holm during “Phantom Box System.” He will also conjure an absorbing and unique groove that’s invented on the spot, usually at a point when it appears that the song is about to run out of gas. It conspicuously invigorates the other two, and Rempis and Fred Longberg-Holm exploiting these crazy grooves, such as the ones chugging toward the end of the first and third tunes, make up some of the highest points of the record.
Both combustible and contemplative, Mi Casa Es En Fuego is another memorable Ballister performance. Rempis, Longberg-Holm and Nilssen-Love know how to pull together so many components in making noisy jazz that’s tenacious, intuitive but not lacking in shape. This is improvised music that Vandermark and Brötzmann would surely approve of, and so should you. (S. Victor Aaron)
Состав