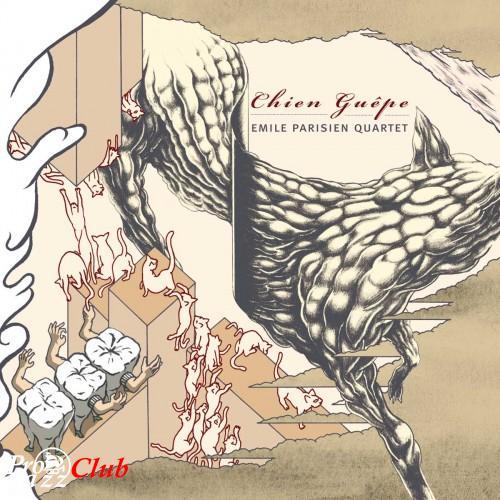 Треклист:
Emile Parisien Quartet
Chien GuêpeКак композитор, Паризьен обладает уникальным черным юмором...
Настоятельно рекомендую. ~ Steve Mossberg Жанр: Avant-Garde Jazz
Год издания: 2012
Издатель (лейбл): Laborie Jazz
Номер по каталогу: LJ15
Аудиокодек: FLAC (*.flac)
Тип рипа: tracks
Битрейт аудио: lossless
Продолжительность: 39:46
Источник (релизер): WEB
Наличие сканов в содержимом раздачи: booklet.pdf
Треклист:
1. Dieu m'a brossé les dents
2. Chocolat-citron
3. Bonjour crépi
4. Chauve et courtois
Лог проверки качества
Об альбоме (Steve Mossberg's Review)
When looking back on musical history, it’s easy to pluck out the figures that herald big stylistic changes and shatter traditions. While one might freely cite innovators like Duke Ellington, Miles Davis, and Ornette Coleman as key players in the development of jazz, they must be careful not to miss the great artists who contribute significant, if not sea-changing work to the canon. For every John Coltrane, there’s also a Wayne Shorter, whose deeply personal and unique contributions may not have steered the course of musical history, but brought rich new dimensions to it as it turned.
French saxophonist Emile Parisien is not a name that is that shows up much when talking about the current generation of left-of-center composer/players, but his music is the kind that has never made headlines. His 2012 recording “Chien Guêpe” is a perfect example of a potentially overlooked gem that shouldn’t be allowed to slip too far under the radar.
On “Chien Guêpe,” Parisien leads the same quartet that has recorded with him since 2006’s “Au Revoir porc-épic.” Pianist Julien Touéry, bassist Yvan Gélugne, and drummer Sylvain Darrifourcq, always sound totally comfortable performing Parisien’s amalgam of 20th-century classical music, punk rock, and inside/outside jazz. The music is sprawling, with carefully written material spanning the entire duration of some nearly fifteen-minute tracks. This is not to say that there’s any lack of legroom or that the band can’t swing or improvise freely, but Parisien’s compositions have a solid architecture, in which the group’s versatility and flawless technique are absolutely essential.
As a composer, Parisien possesses a uniquely dark sense of humor. The album’s opening track, “Dieu m'a Brossé Les Dents” (God Has Brushed My Teeth) begins in a frightening clatter of cymbal scraping, prepared zither, and inside-the-piano playing from Touéry. Funereal themes turn into a somber druidic march over which Parisien plays a more and more frantic melodic figure. The band dissolves at will into open improv, in which the leader is the featured soloist. On alto, Parisien calls to mind Rudresh Mahanthappa with his warm vibrato and Steve Lehman with his angularity, but his melodic approach is more deliberate and slow-building, and can erupt 60s-style blues calls and wails when pushed to the edge.
On “Chocolat-Citron” Parisien switches to his more familiar soprano, an instrument on which he has few peers. The tune is fast and complex, teetering between abstract composition and collective chaos but always grooving very hard. Darrifourq is insistent and inventive with his breakbeats, offering deep rhythmic support while evoking the playful sounds of a toy drumset.
“Bonjour Crépi” is a more traditional free-bop composition, and Touéry delivers a cascading solo of single notes with machine gun speed and right-hook force. Gélugne shows a marvelously elastic sense of time while walking bass under him and the leader. After the piece crashes out and rides quietly into “Chauve et Courtois” on a thin drone from the prepared zither, he provides a pensive monk-like melodic line while his bandmates shriek, scrape and jangle out a wild landscape around him.
If there were a weak point on “Chien Guêpe” it would be its short length and consequently limited number of Parisien compositions to enjoy. Indeed, the prior recordings by the quartet contain a bit more material, so for devoted listeners, this one may seem to brief. For those who haven’t heard Parisien yet as a leader, this is an album like they’ve never heard before.
Highly Recommended.
(Steve Mossberg for freejazz-stef.blogspot.com)
Состав
Emile Parisien - saxophones
Julien Touéry - piano
Yvan Gélugne - double bass
Sylvain Darrifourcq - drums
Any questions -> support@pro-jazz.com. По всем вопросам пишите -> support@pro-jazz.com
—
275
M0p94ok
Нет комментариев. Ваш будет первым!
Войдите или зарегистрируйтесь чтобы добавлять комментарии