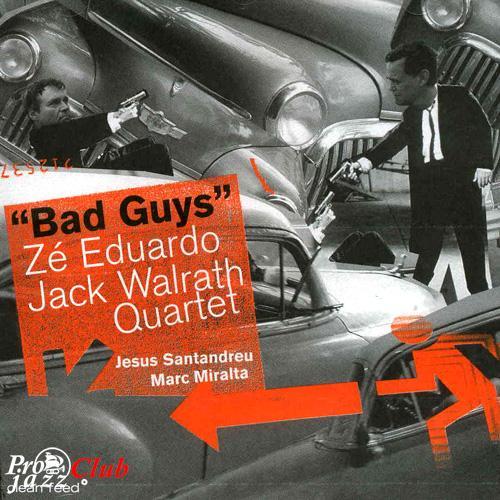 ... review ...
Back in the day, American jazz musicians toured Europe as “a single,” hooking up with local rhythm sections. In the years immediately following World War II, this was a dicey proposition, as improvisers who required a flexible well-versed unit to realize their potential were often confronted with musicians with more eagerness than chops. This continued to be a problem well into the 1960s, Eric Dolphy’s recordings with Europeans being a case in point. The Swedes were wanting, while the Dutch (especially Misha Mengelberg and Han Bennink) got it. Of course, there were exceptions to the rule; Dexter Gordon’s consistently rewarding recordings with Danes like NHØP and Alex Riel being Exhibit A. It was not until the last quarter of the 20th Century, however, that it was a given that a European unit would meet all the demands placed upon them by the best American musicians.
Jack Walrath’s music demands a lot from whoever plays it. Generally, the trumpeter’s compositions reflect both an encyclopedic knowledge of the tradition and a Mingus-informed but ultimately original approach to convey protean emotional intelligence, which produce themes that can move back and forth between light and shadow, sometimes at a saunter, sometimes at a sprint. Then, there are the occasions when Walrath simply throws it down: Here’s a concept full of taxing formal elements; there’s an additional layer of quotations and allusions requiring real jazz literacy; and there’s multiple complex emotions that must be precisely projected, which can be spliced together at a jolting pace. Deal with it.
There is a lot to deal with on this encounter between Walrath and three exceptional Iberian musicians: tenor saxophonist Jesus Santandreu and drummer Marc Miralta , both of whom are Spanish, and the Portuguese bassist Ze Eduardo. Beyond the numerous merits of the music, this album is a needed reminder that Walrath has fallen into the void the US jazz industry, knowingly or not, creates for middle-aged musicians. It was only a decade ago that the trumpeter was the subject of thoughtful, glowing feature articles in the glossy US jazz magazines, pegged to major label CD releases (or, more precisely, the advertising for said CDs). The irony is that artists tend to fall off the industry radar as their art is ripening. That is certainly the case with Walrath, whose playing and writing here is as erudite, soulful and laugh-out-loud funny as ever.
Because Walrath’s music is predicated on technical brinkmanship, conceptual anomalies, and general unpredictability, his cohorts largely determine whether a performance is incandescent or inchoate. Eduardo, Santandreu and Miralta prove to be Hard Corps, to pun the name of a previous Walrath unit. Their rhythmic elasticity (which is not just the ability to stretch, but also to snap tautly back into place at the exact right moment), and their finesse in extrapolating the material to their own creative ends, compares well with the illustrious New York musicians who passed through Walrath’s band.
Two pieces in particular flesh out the refined rapport between Walrath and the Portuguese. The first is “Simian Spring Song,’ which is loaded with iridescent allusions to Monk compositions, requiring another trait Walrath has succinctly articulated: Hip Gnosis. In terms of extrapolating Monk, the performance must encapsulate the spiritual knowledge of the prankster, the cosmic Ha! that is never far from the surface of the pianist’s compositions. The quartet succeeds on that daunting criterion. The other is “Sue’s Changes,” one of Mingus’ great latter pieces. Arguably, the subject of Mingus’ music was passion, reflecting his pained insights into how passion is fanned and quenched. In contrast to other works, where Mingus drained the swamp of his psyche, “Sue’s Changes” is loving portraiture, but still requires finely calibrated changes in tempo, feel and attack. The quartet’s reading is nothing less than authoritative.
The surfacing of one of jazz’s more woefully undervalued artists; the coming of age, jazzwise, of Iberian musicians; the reassertion of universal truths: that’s a lot for a single CD. Deal with it.
Bill Shoemaker ~ cleanfeed-records.com
Лог создания рипа
Содержание индексной карты (.CUE)
По всем вопросам пишите личное сообщение пользователю M0p94ok.
—
209
M0p94ok
Нет комментариев. Ваш будет первым!
Войдите или зарегистрируйтесь чтобы добавлять комментарии