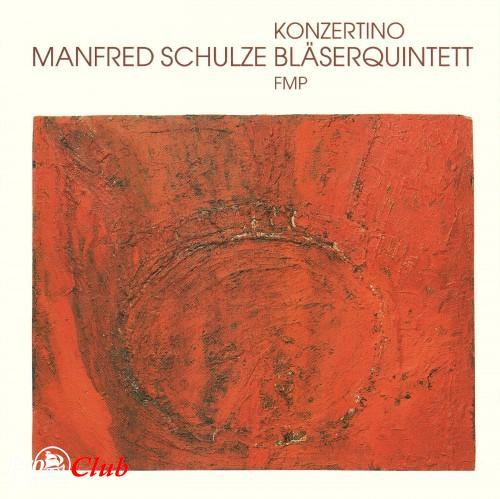 Треклист:
Manfred Schulze Bläserquintett / Konzertino
Жанр: Avant-Garde Jazz
Носитель: CD
Страна-производитель диска (релиза): Germany
Год издания: 1995
Издатель (лейбл): FMP / Free Music Production
Номер по каталогу: FMP CD 70
Аудиокодек: FLAC (*.flac)
Тип рипа: image+.cue
Битрейт аудио: lossless
Продолжительность: 1:14:24
Источник (релизер): gssmg7
Наличие сканов в содержимом раздачи: да
Треклист:
1. Quintett No. 1 (14:51)
2. Hymne (12:29)
3. Konzertino (11:36)
4. Quintet No. 12 (35:28)
http://www.fmp-label.de/fmplabel/catalog2/fmpcd070.html
Лог создания рипа
Содержание индексной карты (.CUE)
Доп. информация
All pieces composed by Manfred Schulze
Recorded live on September 9, 1994 at Townhall Charlottenburg in Berlin
Об альбоме (сборнике)
When Manfred Schulze was forced to abandon his performing activities with the Brass Quintet because of illness, the group split. Trombonist Johannes Bauer and saxophonist Manfred Hering had been with Schulze long enough to know he was no self-promoter - nor was he self-effacing - and that his music, whatever he was writing, would be lost unless it was recorded. To that end, with the composer's permission, they assembled a new Brass Quintet that included a trumpet in the mix and left out the flutes. The music here was recorded live in September 1994, approximately six months after the band had played its first gig, a concert for Schulze's 60th birthday. Schulze conducted the band live whenever he was well enough to do so. Perhaps what this recording does more than anything else is reveal what exactly it is that Schulze contributed to free improvisation, jazz, and "new" music. In the jazz world, he invented not just the ways and means to improvise over particular chord changes or intervallic invention, but more than that, he invented new concepts surrounding the terrain from which improvisation travels. In "Quintett No. 1" and again in "Quintett No. 12," Schulze's use of layered harmonics is employed often by Rova, and in the '80s, when the World Saxophone Quartet began to realize that playing free didn't necessarily mean without conditions, they too adopted these concepts ands the new modalities introduced here by "Konzertino," a vibrant, joyous, and lusty piece of music where the original composition never leaves the arena though the improvising among the reeds is constant and bright, full of a vivacious clarity that uses one idea and tonally grinds it into glass in favor of its atonal counterpart. Polytonality was a constant concern for Schulze, and in these ensemble pieces the full rainbow effect is in evidence - the timbral elegance in "Hymne" allows the clarinet to reveal its individual singing voice amid the droning squawk of the baritone and tenor saxophones. At one point about halfway through the work, the sopranino and soprano enter, and along with the trumpet, become voices speaking in tongues before the baritone introduces a new interval based on a harmonic concept in C sharp and the tongues begin to wag instead of speak, but no less fervently or reverently. The baritone becomes a didgeridoo-like instrument and calls forth from the desert, first droning and then screaming for the rest of the instruments to heed its call - when they do, the microtonal gates of paradise are opened. Recreating the Brass Quintet without Schulze's own saxophones blazing or whispering was a risky maneuver, but it is obvious that the gamble made by Hering and Bauer paid off handsomely. ~ thom jurek, allmusic.com
Состав
Paul Schwingenschlögl - trumpet
Manfred Hering - alto, soprano saxophone, clarinet
Heiner Reinhard - tenor, soprano saxophone
Gert Anklam - baritone saxophone
Johannes Bauer - trombone
По всем вопросам пишите личное сообщение пользователю M0p94ok.
—
306
M0p94ok
Нет комментариев. Ваш будет первым!
Войдите или зарегистрируйтесь чтобы добавлять комментарии