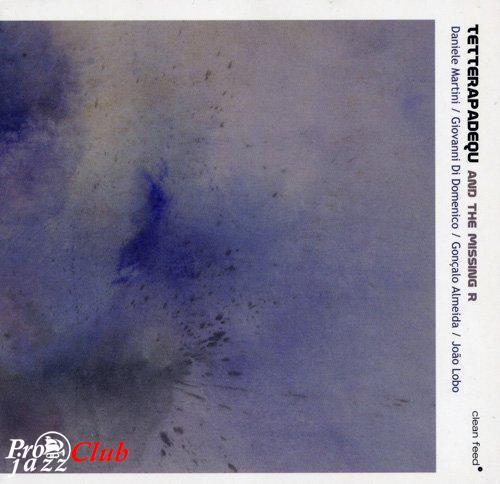 Clean Feed
What does Tetterapadequ mean? Is it an obscure Italian or Portuguese term that reflects this ensemble's mix of two Italian and two Portuguese musicians? No it is not. It's an anagram of "De Patter Quartet, " which was named after the De Pater jazz club in Haia, The Netherlands. The club - one of the favorite venues for Gonçalo Almeida, Giovanni di Domenico, João Lobo, and Daniele Martini when they were attending the local conservatory - was where the project Tetterapadequ was born and began to develop. But something is missing from the anagram: it shoud have one more "r," hence the CD's title. R or no R, what you'll find in the music extends far beyond what is taught in European jazz courses. At De Pater the quartet explored the possibilities of a shared musical language developed through collective improvisation. It is clearly jazz, which is the root of the musical language used here, but there's much more to it than typical jazz-like rhythmic patterns and harmonic constructions. The four young musicians call their new musical lingo "confusionism" because their structured improvisations and spontaneous compositions surprise the listener, and often the musicians themselves, with unexpected and even bizarre outcomes. ~ Clean Feed
Free Jazz Review
This band's curious name is a defective anagram of De Pater Quartet, referring to Muzikantencafé De Pater in The Hague, The Netherlands, a place which this band apparently likes a lot, and for which an "r" is missing, hence the title. There is nothing wrong with the music, though, quite on the contrary. The band consists of Belgian-Italian Daniele Martini on tenor sax, Belgian-Italian pianist Giovanni di Domenico, Portuguese bassist Gonçalo Almeida who resides in Rotterdam, and Portuguese drummer João Lobo. Whatever their origin, I must again congratulate Pedro Costas of Clean Feed for his unbelievable ear for good music, and for giving young musicians the chance to have their music released. The music of Tetterapadequ consists of 13 mostly short tracks of improvised music, mostly subdued, introverted and restrained, with the exception of the third track "Dopey", which is a short drum solo. The four musicians create small creative aural environments, with scarce sounds, lots of empty space. Di Domenico's piano usually sets the tone and the scene. Although some of the sounds come from extended techniques on the various instruments, the music is very accessible and intimate, between traditional jazz (there is even a short reference to Glenn Miller's Moonlight Serenade) and modern classical music, with the other musicians taking the overall sound to a higher stage, creating depth and perspectives that are new and fresh. They are not afraid to push things to the limit, as on the last track, when the first four minutes are nothing but silence, then the bass starts playing softly, with the piano strings being plucked gently, then the drum joins sparingly, and only after eight minutes can the sax be heard, hesitatingly, sensitively, over a one note piano rhythm, yet gaining in power, gaining momentum, hypnotically, majestically, ending in a scream/cough/laugh. Nice music, very creative and subtle. ~ Free Jazz Blog
EAC Report