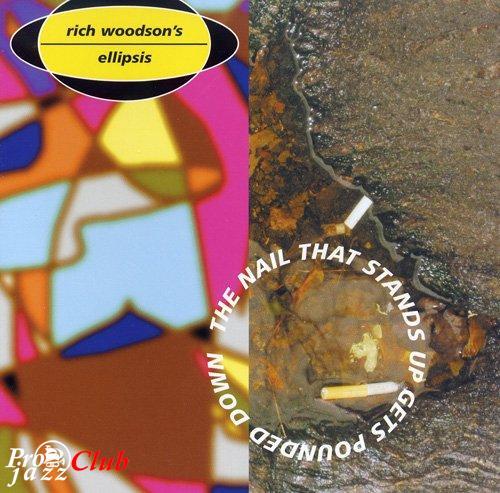 Треклист:
Rich Woodson's Ellipsis - The Nail That Stands Up Gets Pounded Down

AAJ Review
A widespread practice among high school jazz bands is the requirement that students stand up as they take solos, removing all doubt as to where the audience should direct its attention. It is unsurprising that a society which promotes individuality would encourage its young musicians to show off, or that it would nurture the one-track minds of spectators. In contrast, Eastern cultures have long stressed the importance of collectivism, an idea that is reflected in the title of this effort by Rich Woodson's Ellipsis, derived from a Japanese proverb.
The foundation of Woodson's music is sturdy because its "nails"—Peter Epstein (soprano sax), Anthony Burr (clarinet), Aaron Stewart (tenor sax), Mat Fieldes (bass), John Hollenbeck (drums) and Woodson himself (guitar)—are pounded so firmly into place. The back cover finds Woodson proudly announcing the lack of improvisation on the album; it's hardly the first solo-free recording, so why include the disclaimer?
The composer's intentions become more apparent upon hearing the disc. The Nail That Stands Up Gets Pounded Down is a continuous forty-minute stream of prog-rock prolixity, written in a limited dynamic range and stationary tempo, suggesting a kind of Oulipian exercise in restricted parameters. Each instrumental line is distinguishable from the whole, but none is given precedence over the others.
Note for note, there is more musical information in just a few seconds of Nail than some artists manage to express in an entire discography. Moreover, hearing those few seconds will justify the five-year hiatus that has elapsed since Control and Resistance, the group's 2000 debut on Cuneiform Records. It seems that Woodson has spent the intervening years feverishly composing Nail, which is extraordinarily complex but bears the spontaneity of improvised music. A culinary equivalent would be a canister of nutrient-dense protein powder, consumed in one Tasmanian Devil-sized gulp.
The sound of Ellipsis is not wholly unprecedented: Frank Zappa, Rock in Opposition bands, and like-minded artists championed by Cuneiform have provided a critical framework in which to situate Woodson's output, and the internet has yielded a niche market for such music. Commercially speaking, however, the composer is not doing himself any favors by refusing to squeeze his ambitious ideas into song-length compositions, or to underscore them with pandering grooves.
Listeners who only use ten percent of their ears are going to need that untapped ninety percent to appreciate Rich Woodson's Ellipsis. Identifying a memorable motif on this disc is not akin to finding a needle in a haystack; rather, it's like finding a needle in a gigantic pile of needles. With The Nail That Stands Up Gets Pounded Down, Woodson has crafted a musical Finnegans Wake—an intricate, cerebral and elliptical work, indeed. ~ Brad Glanden, AAJ
EAC Report