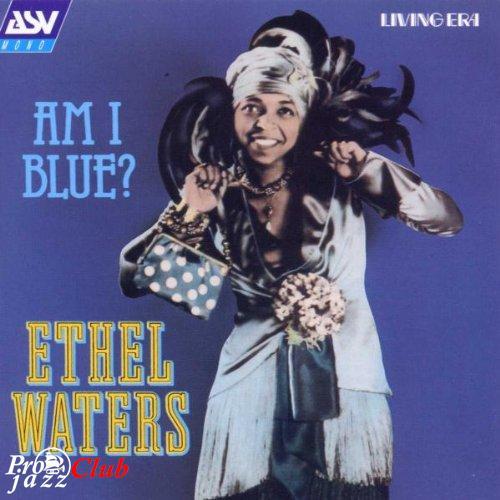 Треклист:
Ethel Waters - Am I Blue?
Жанр: Vocal Jazz, Swing
Страна-производитель диска: Великобритания
Год издания: 1999
Издатель (лейбл): ASV Living Era
Номер по каталогу: CD AJA 5290
Страна: США
Аудиокодек: FLAC (*.flac)
Тип рипа: tracks+.cue
Битрейт аудио: lossless
Продолжительность: 74:09
Источник (релизер): Temerit (what)
Наличие сканов в содержимом раздачи: нет
Треклист:
01. Am I Blue? (3:24)
02. Sweet Georgia Brown (3:12)
03. Dinah (3:17)
04. I'm Coming, Virginia (3:06)
05. Birmingham Bertha (3:00)
06. Second-Handed Man (2:52)
07. True Blue Lou (3:06)
08. Shoo Shoo Boogie Boo (2:54)
09. Trav'lin' All Alone (3:03)
10. Long Lean Lanky Mama (2:54)
11. You Can't Stop Me from Loving You (3:28)
12. I Can't Give You Anything But Love, Baby (3:06)
13. Stormy Weather (3:12)
14. Don't Blame Me (3:14)
15. Shadows on the Swanee (2:59)
16. Heat Wave (3:01)
17. I Just Couldn't Take It, Baby (3:05)
18. A Hundred Years from Today (2:57)
19. Miss Otis Regrets (3:07)
20. Moonglow (3:21)
21. You're a Sweetheart (2:58)
22. I'll Get Along Somehow (2:31)
23. Baby, What Else Can I Do? (3:01)
24. Waitin' at the End of the Road (3:21)
Лог создания рипа
Содержание индексной карты (.CUE)
Отчет CUETools
Об альбоме (сборнике)
A nice introduction to the work of the legendary Miss Waters
Ethel Waters was the first true jazz singer, and arguably the most influential vocalist in the history of popular American music. Her only real rival for this latter title is Louis Armstrong, and it can be argued that while Armstrong was the greater musician, Waters melding of black and white singing styles was actually the more influential contribution to American jazz and popular singing. The advent of CD's has brought a very welcome re-release of some hitherto very hard to find Waters material. There are now several compilation CD's of Waters classic jazz/blues/popular music cuts available. Of these, "Am I Blue?" may be the best single compilation of the Waters oeuvre. The only real rival is the "Ethel Waters: 1925-1940" disc, and this disc presents a greater or at least more representative variety than that disc, though both are worth owning. The sides on this disc were recorded between 1925 and 1939. I am not sure how they were chosen, but they represent a nice cross-section of Waters up-tempo numbers and ballads, her hits and more obscure songs and her work with a number of different bands, including those of the Dorsey Brothers, Benny Goodman and Duke Ellington, as well as a couple of choice cuts with her long-time pianist Pearl Wright. The sound quality is good, and the hits are certainly present in abundance. Those unfamiliar with Waters' singing career may be surprised to learn that she introduced (and recorded what are still the finest versions of) "Dinah", "Sweet Georgia Brown", "Am I Blue?", "Stormy Weather", "Miss Otis Regrets", "Moonglow", "Don't Blame Me", "A Hundred Years From Today" and "Heatwave". Although all of these are marvelous, the incredible sophistication of "Miss Otis Regrets" (Waters must be the only singer who can capture the Cole Porter wit of this song and still make it sound affecting), the incredible emotion (compressed and never overstated) in "Stormy Weather" and the inventive little touches she adds to "swing" "Heatwave" are the highlights of these classics. There are also the delightful surprises - Waters' inimitable characterization of men talking about "True Blue Lou", her playful "You Can't Stop Me From Loving You", the moving "Trav'lin All Alone", the take command, bawdy "Long, Lean, Lanky Mama", the comedy of "Birmingham Bertha", and the touching confidence of "At the End of the Road". In all of the songs on this CD, it pays to listen carefully and hear how Waters plays with both the melody and rhythm of the song to sing a song "her way". When she started doing this in 1917, and on her first recordings in 1921, she was the only singer doing so, and in doing so, she changed the course of popular music in America. There are shortcomings to any single disc, of course. Among the many standards Waters introduced that are not included on this CD: "St. Louis Blues", "Taking A Chance On Love", "Happiness is a Thing Called Joe", "Cabin in the Sky", "There'll Be Some Changes Made", "Memories of You", "Sugar", "Hottentot Potentate", "Harlem on My Mind", and "Supper Time". Also missing are certain classic renditions of songs she didn't introduce, in particular her killer version of "I Got Rhythm" from 1934, a virtuoso example of early jazz singing, and some of her great blues sides, like "West End Blues". And like most compilation discs, this disc ignores all of her recordings done after 1940. There are still no CD's of her classic live performances in the 1950's (captured on the Monmouth-Evergreen album, "Miss Ethel Waters"), of her 40's, 50's and 60's recordings for small labels, of her television performances from the 50's, or of her three recordings of spirituals and hymns for Word records in the 50's, 60's and 70's. By the 50's, age had taken a great toll on her voice, but she nonetheless managed to find the heart of any song she sang and still make it very much hers. What is needed more than anything is a comprehensive box set (at least 4 CD's) that spans her entire glorious career. Until we get such a set, there are at least single disc compilations such as this one to serve as an introduction and the Classics series, which covers all her sides from 1921-1940, for which to be grateful.
-- by Reviewer123
Any questions - support@pro-jazz.com.
Есть вопросы - support@pro-jazz.com
—
283
M0p94ok
Нет комментариев. Ваш будет первым!
Войдите или зарегистрируйтесь чтобы добавлять комментарии