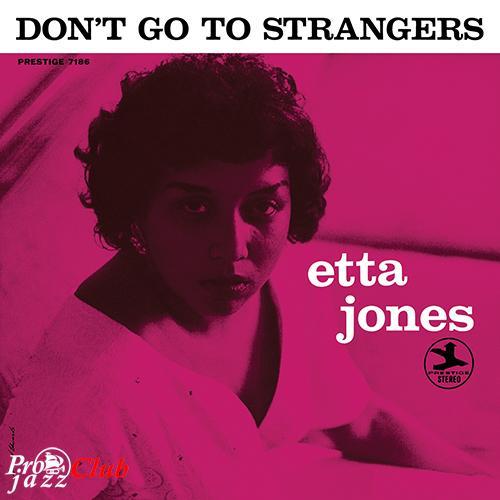 AllMusic Review by Steve Leggett
Don't Go to Strangers was Etta Jones' first album for the independent jazz label Prestige when it was released in 1960 (having been recorded in a single session on June 21 of that year), and although Jones had been releasing records since 1944, including a dozen sides for RCA in 1946 and an album for King Records in 1957, she was treated as an overnight sensation when the title tune from the album went gold, hitting the Top 40 on the pop charts and reaching number five on the R&B charts. An elegant ballad on an album that had several of them, including the masterful "If I Had You" and a marvelous reading of "All the Way," a song usually identified with Frank Sinatra, "Don't Go to Strangers" featured Jones' airy, bluesy phrasing and uncanny sense of spacing, and was very much a jazz performance, making its success on the pop charts all the more amazing. Listen to Jones' restructuring of the melody to the opening track, the old chestnut "Yes Sir, That's My Baby," to hear a gifted jazz singer sliding and shifting the tone center of a song like a veteran horn player, all the while leaving the melody still recognizable, but refreshing it until it stands revealed anew. Apparently there were no additional tracks cut at the session, since bonus material has never surfaced on any of the album's subsequent reissues, although that's hardly a problem, because as is, Don't Go to Strangers is a perfect gem of a recording.
Контейнер: FLAC (*.flac)
Тип рипа: tracks
Разрядность: 24/44,1
Количество каналов: 2.0
Лог проверки качества
Источник: prostudiomasters.com
Any questions - support@pro-jazz.com. Есть вопросы - support@pro-jazz.com
—
367
M0p94ok
Нет комментариев. Ваш будет первым!
Войдите или зарегистрируйтесь чтобы добавлять комментарии