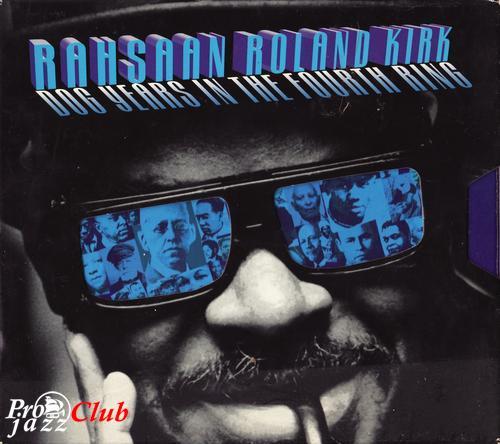 Треклист:
Rahsaan Roland Kirk - Dog Years in the Fourth Ring
Жанр: Post-Bop, Hard Bop
Носитель: CD
Страна-производитель диска: США
Год издания: 1997
Издатель (лейбл): 32 Jazz
Номер по каталогу: 32032
Аудиокодек: FLAC (*.flac)
Тип рипа: tracks+.cue
Битрейт аудио: lossless
Продолжительность: 2:13:13
Источник (релизер): uglymouse (what)
Наличие сканов в содержимом раздачи: да
CD1 {49:37} - Dog Years in the Fourth Ring: Disc 1
01. Box Tops and Whistlin' Rings (0:20)
02. Domino (5:03)
03. Blues for Alice (6:19)
04. I Remember Clifford (3:37)
05. Freddie Freeloader (5:32)
06. Lester Leaps In (5:03)
07. Sister Sadie (6:02)
08. One Mind/Seasons (4:42)
09. I Say a Little Prayer (12:59)
Лог создания рипа
Содержание индексной карты (.CUE)
Отчет CUETools
CD2 {45:49} - Dog Years in the Fourth Ring: Disc 2
01. Jammin' with a Wolf (0:26)
02. Three for the Festival (excerpt) (3:52)
03. Untitled Blues (7:23)
04. Passion Dance (8:10)
05. Petite Fleur (Little Flower) (7:34)
06. Giant Steps (4:13)
07. Misterioso/Blue Monk (excerpt) (1:04)
08. Rahsaantalk (0:25)
09. Multi-Horn Medley: Satin Doll/Lover (6:20)
10. Blacknuss (6:22)
Лог создания рипа
Содержание индексной карты (.CUE)
Отчет CUETools
CD3 {37:48} - Disc 3: Natural Black Inventions: Root Strata
01. Something for Trane That Trane Could Have Said (3:10)
02. Island Cry (3:54)
03. Runnin' from the Trash (2:16)
04. Day Dream (3:41)
05. The Ragman and the Junkman They Ran from the Businessman They Laughed and He Cried (3:03)
06. Breath-A-Thon (1:56)
07. Rahsaanica (3:46)
08. Raped Voices (1:52)
09. Haunted Feelings (2:26)
10. Prelude Back Home (3:45)
11. Dance of the Lobes (2:07)
12. Harder & Harder Spiritual (2:35)
13. Black Root (3:17)
Лог создания рипа
Содержание индексной карты (.CUE)
Отчет CUETools
Review by Thom Jurek
This three-CD box set, in producer and then label Boss' weirdly wired brain, encompasses two different sides of Rahsaan Roland Kirk. Discs one and two represent sporadic live recordings of Kirk from 1962 to 1972, all of them previously unreleased and issued courtesy of a Kirk collector named George Bonafacio. These two discs contain Kirk classics such as "Domino," "Blacknuss," and an excerpt from "Three for the Festival," as well as singular Kirk interpretations of "I Say a Little Prayer," "Freddie Freeloader," "Lester Leaps In," "Giant Steps," "Sister Sadie," and more. These two discs are chock-full of stellar performances that are well-recorded despite being fan tapes. The musicians on these dates range from bassist Niels-Henning Ørsted Pederson to Hilton Ruiz, Jerome Cooper, Tete Montoliu, and many others. None of this material is substandard. Kirk wastes no time on the opener, "Domino," in breaking out the whistles in his solo. The blues range is deep on many of these tracks, as is the entertainment value. Kirk was a performer as much as he was a musician, before and after the stroke. His lyric and harmonic sensibilities were deeply embedded in one another, and his way of crossing harmonic strategies was truly singular because it was so unorthodox (check his gorgeous opening and full read of "I Remember Clifford" or the excerpt from his medley of "Blue Monk" and "Misterioso" for examples). The fact that he could play two melodies at once was only one of his many skills. In any case, anyone looking for live Kirk apart from the Montreaux recordings would be well-advised to seek these out. Disc three is a CD issue of Natural Black Inventions: Root Strata, his worst-selling and most critically dumped-on studio record. Released in 1971, it featured Kirk on all instruments. Natural Black Inventions is one of the heaviest records Kirk ever released, a completely focused meditation on mode, rhythm, drone, and the blues' context within them. Here was an honest, non-abstract attempt to put Eastern music up against the blues and see what happened. Using everything from his saxophones and flutes to his strich, manzello, harmonium, drums, and bird-and-duck calls years before John Zorn knew they existed as musical instruments, Kirk took his black experience and rooted it in the experience of the day, as well as in antiquity and in the history of jazz, soul, R&B, the blues, and even Yiddish music (check out "Island Cry" for a solid example, where the barroom meets the Jewish exodus to the slave call-and-response hollers in the fields). And the fact that it goes on and on for 45 minutes is so breathtaking that it becomes heartbreaking. Natural Black Inventions: Root Strata is its own classic, and it deserved its own release apart from the package, but listeners will have to take what they can get. For this album alone, this package is worth the price.