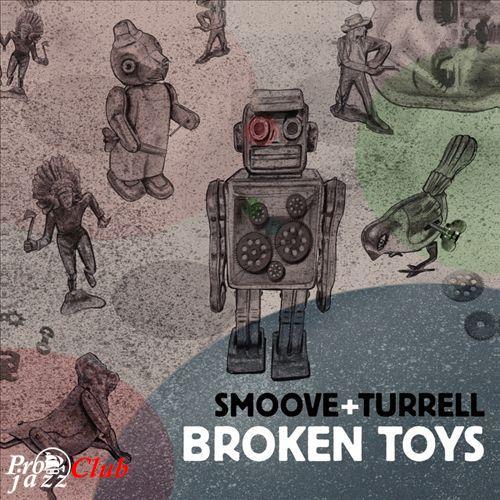 Треклист:
Smoove + Turrell - Broken Toys Жанр: northern funk, soul, acid jazz
Носитель: CD
Страна-производитель диска (релиза): UK
Год издания: 2014
Издатель (лейбл): Jalapeno Records
Номер по каталогу: JAL 178
Страна исполнителя (группы): UK
Аудиокодек: FLAC (*.flac)
Тип рипа: tracks+.cue
Битрейт аудио: lossless
Продолжительность: 55:29
Источник (релизер): вафля Merseph
Наличие сканов в содержимом раздачи: даТреклист:
1. Have Love
2. Will You Be Mine
3. Lay it on Me
4. Long Way to Fall
5. Play to Win
6. People Keep Talking
7. Always
8. I Just Want More
9. The Clown
10. Broken Toys
11. One Woman Army
12. Coming Home
13. Now or NeverСложно вот так вспомнить, кто сейчас делает чтото фанки вкусное...они делают)
Лог создания рипа
Содержание индексной карты (.CUE)
Об альбоме (сборнике)
Following a two year gap since their last release, northern funk duo Smoove and Turrell return with their third album, ‘Broken Toys’. Having supported disco legends Nile Rogers & Chic and Motown hit-makers Martha and the Vandellas since 2012’s ‘Eccentric Audio’, there has been a lot of hype surrounding this album and it does not fail to deliver.
Smoove and Turrell have become renowned for their array of blues, jazz, funk & soul tracks and married with the sparkling pop and disco influenced floor stompers on ‘Broken Toys’, Turrell’s sleek, soulful vocals and Smoove’s funky, northern soul production, this album is a delight from start to finish. Opening track ‘Have Love’ immediately showcases the albums toe-tappingly catchy disco beats and laced with some memorable trumpets, we are instantly thrust into a 1960’s soul soiree.
The upbeat and brass-heavy ‘Play To Win’ is a summery sounding jaunt with an occasional smattering of the duo’s trademark funky keys and it stands out as one of the album’s more dancier offerings along with ‘I Just Want More’ which exemplifies the duo’s disco sound with a wealth of funk guitars and a body moving bassline making it easy to see why this was chosen as the first double A side single to be released from the album alongside ‘Lay It On Me’.
The title track, ‘Broken Toys’ provides a smooth jazz-inspired alternative to the disco/soul sound that drives this album along and it arrives as a pleasant change. Offering a more minimalistic and bass heavy sound, the track would not find itself out of place on the soundtrack of a contemporary art film with the repetitive lyrics ‘Broken toys for adult boys’ providing a haunting outro.
‘Always’ is another track that offers an alternative to the disco dancefloor stompers that fill this album and slows the pace down to a pleasant stroll, whilst showcasing Turrell’s passionate and emotionally stirring vocals as he describes the tenderness of a relationship exhibited in the lyrics “Every single time that you need a man and a friend, always, I’ll be there.”
With their music having been featured on TV shows as wide spread as Match of the Day and Strictly Come Dancing as well as in the video game The Crew, Smoove and Turrell have already built up something of a cult following across the UK and once the music buying public get their hands on this little gem, their meteoric rise as the kings of northern funk is sure to escalate at breakneck speed.
Matt Tarr
Не забываем нажать - сказать "Спасибо"