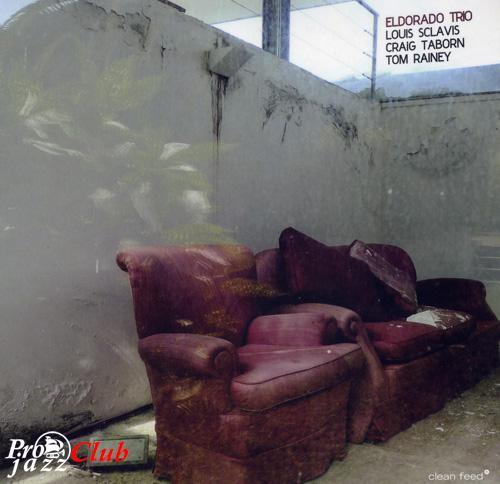 Жанр: Modern Creative, Free Improvisation
Страна-производитель диска: Portugal
Год издания диска: 2010
Издатель (лейбл): Clean Feed
Номер по каталогу: CF193
Аудиокодек: FLAC (*.flac)
Тип рипа: tracks+.cue
Битрейт аудио: lossless
Продолжительность: 60:53
Наличие сканов в содержимом раздачи: front/back
Источник (релизер): net, thanks mariorg
➊ Let It Drop
➋ To Steve Lacy
➌ Up Down Up
➍ La Visite
➎ Summer Worlds
➏ Lucioles
➐ Possibilities
➑ Eldorado
Louis Sclavis - bass clarinet, soprano saxophone
Craig Taborn - piano, Fender Rhodes
Tom Rainey - drums
Лог отсутствует
Содержание индексной карты (.CUE)
Лог Audiochecker
Reviews
This trio is pure jazz with composed pieces and improvised tracks, but all with an adventurous streak, and that's only possible and successful because of the superb musicianship both technically and creatively. Sclavis is of course on bass clarinet, but also on soprano sax, Craig Taborn plays piano and Tom Rainey drums, without a doubt each among the best on their instrument today. The compositions range between the melancholy ("La Visite") and the joyful ("Up Down Up", "Possibilities"), or even the slightly insane ("Luccioles"), but all of them are musical delights. On "La Visite", on which after a long and sad Taborn piano moment, Sclavis brings some of the most heart-rending bass clarinet-playing that I've heard in a while, slowly driving his beautiful playing to a wailing climax.
Sclavis is excellent throughout, using his full skillset on the clarinet from classical over swing to modern music, Taborn and Rainey are not only functional but they create the overall environment becoming a perfect fit for the variations in mood and styles, not just accompanying but creating the context in which the soloist must journey. Despite the variations, the music is still very coherent. One of Sclavis' least polished albums, yet the rawness of the adventure suits him quite well.This new cooperative trio with Craig Taborn and Tom Rainey brings a very unusual instrument combination in a very organic way pointing new ways to possible future colaborations by the best musicians from both sides of the Atlantic. The music on this CD brings a new ground to improvised music and that's exactly what Sclavis had in mind when he brought this band together. Even If most of the pieces are compositions by Sclavis alone, "Eldorado Trio" really sounds like a non-hierarchical, equalitarian, band, with all the implications we can think of: no-one is really the "soloist", and no-one has the established role to "accompany". The resulting music is pure gold, emanating a natural feeling: "A largely improvised music with some complex written parts, played by musicians with very similar dynamics and energy, but involved in different musical practices, able to complete each other and to easily find a group sound since the first note", as Sclavis himself puts it. And no, there wasn't the intention to design a "Franco-American connection": "These musicians aren't with me because they're Americans, but because they are who they are – jazz is the consequence of this kind of encounters." This is a landmark!
Any questions -> support@pro-jazz.com. По всем вопросам пишите -> support@pro-jazz.com
—
117
M0p94ok
Нет комментариев. Ваш будет первым!
Войдите или зарегистрируйтесь чтобы добавлять комментарии