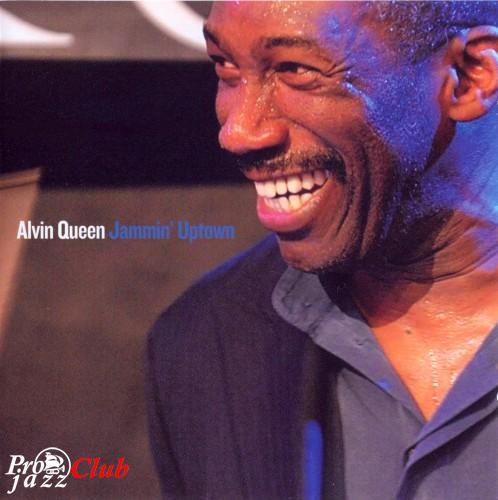 Треклист:
Alvin Queen / Jammin' Uptown
Жанр: Mainstream Jazz
Страна-производитель диска: Canada
Год издания диска: 2008
Издатель (лейбл): Nilva / Just A Memory
Номер по каталогу: JAM 9164-2
Страна: USA
Аудиокодек: FLAC (*.flac)
Тип рипа: image+.cue
Битрейт аудио: lossless
Продолжительность: 47:59
Источник (релизер): CD
Наличие сканов в содержимом раздачи: да
Треклист:
01 - Europia
02 - Jammin' Uptown
03 - After Liberation
04 - Mind Wine
05 - Hear Me Drummin'
06 - Resolution of Love
07 - Hassan
Лог создания рипа
Содержание индексной карты (.CUE)
Об исполнителе (группе)
Drummer extraordinaire Alvin Queen may not be terribly well known among more casual jazz listeners, but he should be. He suffers the same fate that many players before him - reed and woodwind master Sahib Shihab is one such example and countless others did: he relocated to Europe in the 1970s (and has lived and worked mainly in Geneva since then). Queen's résumé includes time with Charles Tolliver, Kenny Drew, Big John Patton, Horace Parlan, Junior Mance, Pharoah Sanders, Bob Berg, Bennie Wallace, and Leon Thomas, to name a few. In addition to his various playing gigs, Queen owned a label for a while that made some truly fine records, including Soul Connection, Big John Patton's only date as a leader during the 1980s. Jammin' Uptown was recorded and released on Nilva in 1985. This date features a stellar band comprised of then-Young Lions such as Terence Blanchard on trumpet and trombonist Robin Eubanks. Completing the front line is Emmanuel "Manny " Boyd, a veteran of Bobby Hutcherson's and Eddie Henderson's bands in the 1970s. The rhythm section includes veteran pianist John Hicks, Ray Drummond on bass, and Queen in the drum chair. The seven compositions are all by bandmembers. The music here is progressive jazz in other words, very advanced hard bop. Blanchard wrote "Europia," a poignant number considering Queen's exile in Geneva. It comes roaring out of the gate with a very knotty staccato head, twisting and turning on a minor seventh in three different configurations before he begins his solo, which Boyd follows on tenor. These are steamy, pushed-to-the-margin affairs, fueled by the stomping rhythm section - Queen's breaks are especially fine and Hicks' brief solo is all drama and tension, but it all swings like mad. The title cut by Boyd struts and swaggers right out of the blues with its staggered front-line plays on the melody. But it's not simply a blues; it moves harmonically through various thematic and key changes. Eubanks' solo is the high point on this tune. Another notable tune is Hicks' straight hard bopping "Mind Wine." With a head worthy of Blue Note in the early '60s, it nonetheless stretches the harmony toward something that could have been performed by the Thad Jones/Mel Lewis Orchestra. His own dazzling solo is one of the album's many high points. Everyone is in excellent form here - the execution and fluid rhythms complement the complex arrangements quite well and Queen truly shines in the spotlight as a drummer of real consequence. Justin Time's Just a Memory imprint reissued this date on CD in 2008. The CD version contains a live bonus track in the middle of the album: Queen's solo showcase "Hear Me Drummin'," which is just stellar.
Об альбоме (сборнике)
Back in 1985, drummer Alvin Queen put together a band of American musicians to record Jammin' Uptown for his Nilva Records label. Queen, who was living in Europe, visited the United States to play live concerts and to record. This band reflected his vision as he brought together young musicians Terence Blanchard (trumpet) and Robin Eubanks (trombone) along with veterans John Hicks (piano) and Manny Boyd (tenor, alto and soprano sax) with Ray Drummond (bass) as the bridge.
All of the music here is original, with contributions from Blanchard, Boyd, Eubanks, Hicks and Queen. Queen's singular composition is the previously unreleased "Hear Me Drummin," which was recorded in 2001 at the BP Jazz Club in Zagreb. It is the perfect inclusion, for it shows Queen's articulate sense of dynamics and timbre and crystallizes his approach to drumming. He sets up a roll on the toms and edges the snares before venting the rhythm on them. The beat is in a constant state of reinvention, but the rhythm is heady and the grooves irresistible.
The compositions are washed by mainstream jazz but they have an innate strength and character that are enhanced by the arrangements. "Resolution of Love" is a sweeping ballad, warm in its disposition and insightful in its development with Eubanks and Hicks being the prime inventors. Eubanks tonality is clean and full, his ideas coming off in neat sequence. Hicks ripples a whirl of inventions with progressions that are inspired and lyrical.
"Hassan" is driven by a blistering bop trajectory that takes the band into another dimension - one that erupts with erudite intensity. Boyd shoots off reeling phrases, Drummond turns the bass into an earthy adjunct, and Queen brings in an energetic fluidity.
Top-notch compositions and excellent playing make this an absolutely delightful record.
Состав
Alvin Queen - drums
Manny Boyd - tenor, alto and soprano sax
John Hicks - piano
Terence Blanchard - trumpet
Robin Eubanks - trombone
Ray Drummond - bass
Any questions - support@pro-jazz.com.
Есть вопросы - support@pro-jazz.com
—
230
M0p94ok
Нет комментариев. Ваш будет первым!
Войдите или зарегистрируйтесь чтобы добавлять комментарии