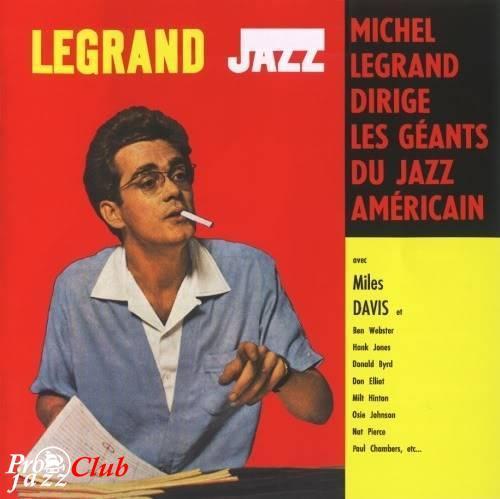 Наличие сканов в содержимом раздачи: да (полный набор сканов, 300 dpi)
Треклист:
Michel Legrand - [Legrand Jazz #01] The Jitterbug Waltz
Michel Legrand - [Legrand Jazz #02] Stompin' At The Savoy
Michel Legrand - [Legrand Jazz #03] 'Round Midnight
Michel Legrand - [Legrand Jazz #04] Django
Michel Legrand - [Legrand Jazz #05] Night In Tunisia
Michel Legrand - [Legrand Jazz #06] In A Mist
Michel Legrand - [Legrand Jazz #07] Blue And Sentimental
Michel Legrand - [Legrand Jazz #08] Don't Get Around Much Anymore
Michel Legrand - [Legrand Jazz #09] Wild Man Blues
Michel Legrand - [Legrand Jazz #10] Nuages
Michel Legrand - [Legrand Jazz #11] Rosetta
Recorded June 25, 27 and 30, 1958 in New York.
Лог создания рипа (EAC Log)
Состав: (Back Cover)))
Customers Reviews @ Amazon
5.0 out of 5 stars - The Test of the Best, September 21, 2000
By: TUCO H. "H. TUCO" (Los Angeles, CA)
This is my favorite jazz record from the 1950s. Legrand's orchestrations have a subtle mixture of romantic understantement and Stravinskian modernity that is absolutely fantastic; they truly add some incredible complexity to what the soloists are doing without in any way hampering them, in fact, they inspire them to new heights of expressive purity.
Legrand is famous for his 'romantic' jazz-influenced soundtracks for "The Thomas Crown Affair," "Umbrellas of Cherbourg" and other flicks, which can often get too schmaltzy and nauseating. On Legrand Jazz, however, he tried to make his ultimate artistic statement without any commercial compromise, and man did it work! Everything is just right and there isn't a touch of mawkishness anywhere---just sophisticated, transcendent music. All the tracks are super-sublime and fancy-fine, and the more you listen to them the better they get.
Each of these three 1958 dates featured a different band: a 10 piece, an 11, and 15. The players? Ben Webster, Miles Davis, John Coltrane, Bill Evans, Phil Woods, Hank Jones, Jimmy Cleveland, Art Farmer, Ernie Royal, Donald Byrd, Herbie Mann, Eddie Costa, Paul Chambers, just to name a few of the more famous honchos. There are plenty of solos but they weave themselves in and out of the arrangements in a way that synergizes the music and lifts it to a higher plane. Especially choice among a record full of choice solos are Ben Webster's super-creamy lines on "Blue and Sentimental," and, of course, Miles Davis' immortal poetry on "Round Midnight," "Django" and "Jitterbug Waltz."
5.0 out of 5 stars - EASILY ONE OF THE BEST JAZZ RECORDS OF ALL TIME, March 6, 2000
By: A Customer
I can't believe nobody's written a review for this one of a kind masterpiece of a record. Legrand's awesome and beautifully subtle orchestrations provide the perfect balance and sophistication for the cream (and I mean cream) of jazz players circa 1959. The unique combination of top soloists on some of these tracks alone make this a great disc. These particular guys would've never played on these particular tracks if not for Legrand's suggestion (and never had before excepting Miles on "Round Midnight.")Where else can you hear John Coltrane and Phil Woods in the same group? But this is far more than an "all-star" blow out. Legrand retained but toned down his famous "romantic" side and added thoroughly modern Stravinskiesque touches providing all the virtues of the best orchestral music while leaving the soloists room to breath. Just compare this to some of the garbage orchestras Wes Montgomery was backed with! All the tracks are excellent--timeless--any one of them worth the price of the CD many times over. Miles Davis' playing on "Django,""Round Midnight," and "Jitterbug Waltz" is heartbreakingly beautiful, some his best playing. Do your soul justice and buy this album.
5.0 out of 5 stars - An absolutely unique experience!, May 8, 2003
By: J. C. Danko (North St. Paul, MN USA)
My vinyl copy of Legrand Jazz bought in 1961 is a much worn and treasured audio treat. The availability of the same on CD was a great relief. In the 50 years I have been seriously listening to music I keep returning to this brilliant and unique collection. There is just nothing else like it for comparison. The tune selection covers the spectrum of jazz styles from Fats Waller to John Lewis. The muscians were all obviously selected for their individualistic solo styles and yet they blend into wonderful ensembles thanks to Legrand's quirky and surprising arrangments. The arrangements are complex but direct and the musicians' enthusiasm for the material is obvious...nobody was sleep-walking at these sessions. Some of the combinations are genius. Nuages has a trombone choir with one of Ben Webster's breathy solos. Django has Miles in front of vibes and a harp. This is serious music that shows the possibilities of jazz in the right hands.
Доп. информация:
В отличии от альбома с таким же названием ... в этой раздаче, тут у меня, другое издание, другой производитель диска, другие обложки и буклет (сканы внутри) ... и содержание другого порядка.
Any questions - support@pro-jazz.com. Есть вопросы - support@pro-jazz.com
—
265
M0p94ok
Нет комментариев. Ваш будет первым!
Войдите или зарегистрируйтесь чтобы добавлять комментарии