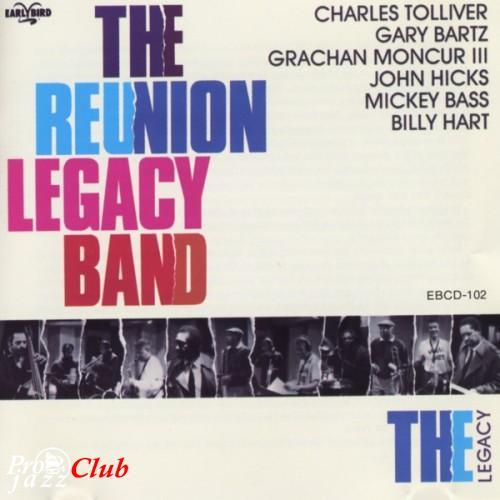 Треклист:
The Reunion Legacy Band / The Legacy
Жанр: Hard Bop, Straight-ahead
Носитель: CD
Год издания: 2003
Издатель (лейбл): Early Bird
Номер по каталогу: EBCD-102
Страна: USA
Аудиокодек: FLAC (*.flac)
Тип рипа: tracks+.cue
Битрейт аудио: lossless
Продолжительность: 00:50:40
Источник (релизер): voopa
Наличие сканов в содержимом раздачи: нет
Треклист:
1 Getting Sentimental Over You (George Bassman / George Bassom / Ned Washington) 7:24
2 Do a Funny Dance (Gary Bartz) 5:14
3 "A" for Pops (Grachan Moncur III) 6:35
4 Avotcja (John Hicks) 8:57
5 Franess (Charles Tolliver) 6:39
6 The Juggler (Mickey Bass) 9:41
7 Brother Rick (Mickey Bass) 6:07
Recorded in November 1990
Лог создания рипа
Содержание индексной карты (.CUE)
Об альбоме (сборнике)
cdbaby.com
The Tradition of "The Reunion Legacy Band" was formulated by a group of guys who grew up together musically, played together for more than 30 years, and are always aspiring to keep alive the traditions initiated by the 'Be-bop' Masters: Miles, Bird, Dizzy, and Monk. Keeping, and maintaining the traditions, the flavors of the past, and then actively taking them forward into the future.....
The Band originally came together in 1990 to record "The Legacy"; Produced by Mickey Bass and released in 1991 on the "Early Bird" Record Label; the original Band members were: John Hicks, Gary Bartz, Charles Tolliver, Grachan Moncur III, Billy Hart and Mickey Bass - a unique, cooperative group.
During their 'formative' years, and living in Brooklyn; Grachen, Charles, and Mickey played a steady gig every Monday night; always with a different drummer and saxophonist. They were the final 'House-Band' at "The Coronet" before it closed..... At that time It was very difficult for younger artists to be leaders on ‘gigs’; the ‘Elder Statesmen’ were predominant in Jazz. However, the experience of working with older and wiser musicians gave Junior Jazz players the experience necessary to truly develop their own sound. Even before this trio migrated to the Mecca of jazz – New York City – they had honed their skills at the North End Lounge – a club in Baltimore owned by Gary Bartzs’ Father. Meanwhile, John Hicks was already living in New York and making ample use of the education he had acquired at Boston’s Berklee School of Music. The four men then played together every weekend. After a time, all these aspiring young musicians came together in New York City and continued to work with one another, on and off.
The Hero’s, who inspired them were; John Coltrane, Miles Davis, Sonny Rollins, Charlie Parker, Dizzy Gillespie, Thelonius Monk, and Bud Powell.
These inspired young journeymen, learned from the legacy of the past, lived in the present and leaned toward the future of jazz..... The resultant collaboration is something like a marriage could be; something old, something new, something borrowed.....and something blue.
Hence the Title of this Album: “The Reunion Legacy Band”
Of the original Band members; two have gone on to become Bandleaders in their own right, one is sadly no longer with us here; but the remaining three will be making a special, rare appearance, together once more, as a part of the Summer Concert Series for the 'serious' Jazz lover: "Jammin' on The Hudson";
Billy Hart, Grachan Moncur III and Mickey Bass; who in the great tradition of the ‘Be-bop’ Masters, of apprenticeship, now include; Josh Evans, who studied with Jackie McLean from the age of fifteen, Aaron Graves, who was first introduced to this Music through Mickey Bass and his “Jazz Ensemble”, whilst he was a student at the prestigious “Ellington School of the Arts”, Washington, D.C. Aaron brings his experience learned with ‘Little Jimmy Scott’. Charles Davis Jr. also joins this band.
Keeping, and maintaining the traditions, the ‘flavors’ of the past…..and then actively taking them forward…into the future.
Riverbank State Park is where 'it’s all happenin’ this Summer, with Our “Jammin’ on The Hudson” series;
Where Great Jazz Music comes to Life!
Posted by Mickey Bass
Состав
Gary Bartz (alto saxophone);
Charles Tolliver (trumpet);
Grachan Moncur II (trombone);
John Hicks (piano);
Mickey Bass (bass);
Billy Hart (drums).