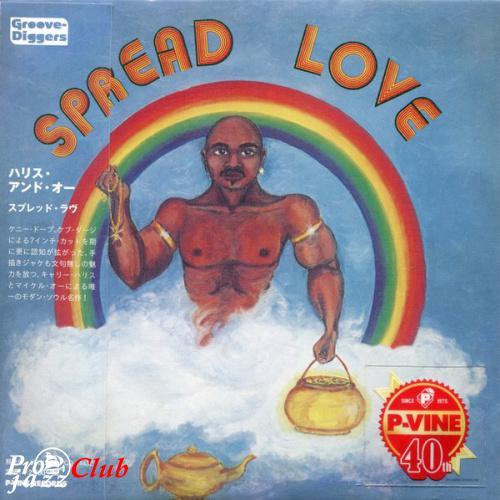 Треклист:
Carey Harris & Michael Orr / Spread Love
Жанр: Funk, Soul
Носитель: CD
Страна-производитель диска (релиза): Japan
Год издания: 1976
Год издания CD: 2015
Издатель (лейбл): P-Vine Records
Номер по каталогу: PCD-24432
Аудиокодек: FLAC (*.flac)
Тип рипа: tracks+.cue
Битрейт аудио: lossless
Продолжительность: 42:26
Источник (релизер): artmuss
Наличие сканов в содержимом раздачи: нет
Треклист:
1. Ecstasy, Fantasy & Dreamland (03:32)
2. Let Me Be With You Awhile (04:14)
3. Here I Go (Through These Changes Again) (03:10)
4. Feelings (05:08)
5. A Piece Of Mine (05:36)
6. Spread Love (05:23)
7. Keep My Fire Burning (05:28)
8. You Opened My Eyes To The World (06:44)
9. Afterwhile (03:05)
Лог создания рипа
Содержание индексной карты (.CUE)
DR Log
Об исполнителе (группе)
In 1975 Orr and Harris started to record one of the best unheard projects in recording history their album Spread love . Around that time Orr was asked by the Oberlin Obsevatory in Ohio to do a presentation on music production. After the presentation he heard a singer who gave him goose bumps he had never experienced before. Her name was Bernadine Mitchell. She was eventually to provide the perfect vocal finish to one of the key songs Orr had written for the album Feelings a superb mid-tempo ballad. The opening song Ecstasy, Fantasy, Dreamland just about sums up what pressure these guys were under, to put their positive, soulful message across. Here I Go Through These Changes is a modern soul classic and an auto biographical song and was descriptive of Orr s ability to let go of something he loved dearly, even knowing it was going to put him through change after change. The song was later covered by soul legend Johnny Taylor and released as a single. The first single to support the album was the title track Spread love a superb, percussive led modern dancer, sounding unbelievably fresh and up to date considering it was recorded 40 years ago. The skipping dance beat of the jazz influenced instrumental Piece of Mind wouldn t be out of place at todays Soul/Jazz clubs. Jazz is a recurring factor throughout the whole of this album, just listen to You Opened My Eyes to the World . But unfortunately it turned out that without a big company to back up the release they received hardly any airplay. Disco became very prominent and their sound did not fit the format that was dominating R&B stations across America. Though radio stations in Detroit and Washington were very supportive and they still succeeded to sell 5000 copies. However the record made its way to Europe. After many years Michael still receives requests from U.K., Sweden, Germany even from Japan and many other Euro countries for original copies of his album. Spread love was truly released ahead of its time. Up to now only collectors have enjoyed this vintage piece. On record collector websites the record is for sale for amounts of over 100 and 200 Euro. But now re-issue label PTG Records is proud to have re-released on CD the Orr and Harris classic Spread love . This reissue is digitally remastered form original mastertape.
Состав
Arranged By [Co-arranged By] – Michael Neal (tracks: 1 to 5)
Bass Guitar – Carey Harris
Drums – Ricardo "Speed" Nixon
Guitar – Bobby Curry (tracks: 6 to 9), Reggie Stewart
Keyboards, Vocals – Michael Orr
Percussion – P. Adolph Burton
Trumpet, Flugelhorn, Flute – Michael Neal
Vibraphone – Bernard James (tracks: 1 to 5)
Раздаю до первых 5-ти скачавших, на раздачи не возвращаюсь...