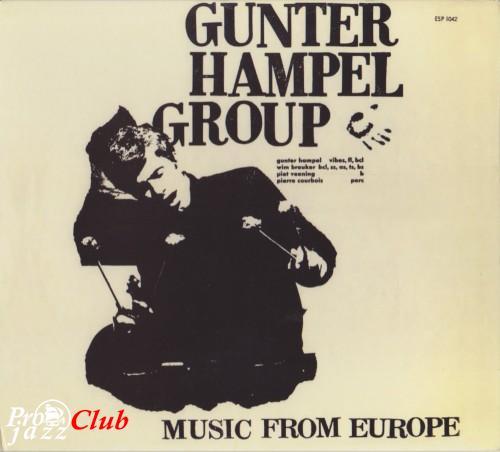 Треклист:
Gunter Hampel Group - Music From Europe
Жанр: Free Jazz
Страна-производитель диска: USA
Год издания диска: 2008
Издатель (лейбл): ESP Disk
Номер по каталогу: ESP 1042
Аудиокодек: FLAC (*.flac)
Тип рипа: tracks+.cue
Битрейт аудио: lossless
Продолжительность: 42:25
Источник (релизер): собственный рип с оригинального диска.
Наличие сканов в содержимом раздачи: да
Треклист:
01. Assemblage: (Suite, Dedicated To Wolfgang Kopetsch) (21:58)
Sub-titles
1.1 Dissociation
1.2 Consolation
1.3 Renunciation
1.4 Modul
1.5 Esotheric
1.6 Epiphany
1.7 Turbulence
02. Heroicredolphysiognomystery (Dedicated To Eric Dolphy) 11:39
03. Make Love Not War To Everybody (Piece In 4 Parts) 8:48
Лог создания рипа
Содержание индексной карты (.CUE)
Доп. информация:
Recorded December 21, 1966 in Baarn, Holland
Об альбоме (сборнике)
Although it is simply called Music From Europe, the Gunter Hampel Group's first foray into America in 1966, could well have joined the ranks of several early (1950s) recordings by MJQ or John Lewis and Dizzy Gillespie's Perceptions (Verve, 1961) as one of those earliest examples of where the musical cultures of classical Europe and jazz USA collide.
Perhaps the title is even deliberate; a tongue-in-cheek reminder that jazz—although, in its absolute form a musical idiom evolved from the Afro-American blues—might also be "spoken or sung" in another, albeit eccentric idiom far away, even from the avant-garde musical movement of the 1960s. This is probably the hypothesis of Gunter Hampel's very forthright record. So it was made after most of Europe had heard Coltrane music of his late period... so it was made after Dolphy marched through Europe with the all-conquering Mingus band... So what?
Gunter Hampel born in Germany in 1937, being brought up on a staple of European classical and German folkloric music collided with jazz when he heard Louis Armstrong, who "spoke" to him in jazz, by then the only language he cared to understand after the War. But Hampel is more like Bartok, at least in his early interpretations of his impulses that he laid down musically. By the 1960s he was so completely immersed and proficient in each of the three milieus that he could lay claim to making a statement in a third stream, music from Europe. This is really what he laid down on this record for Bernard Stollman, in Baarn, Holland just before Christmas in 1966. It then heralded Hampel's entry into the US.
Music From Europe is literally a collision of cultures. And it is an oblique early interpretation of the idiom of jazz by arguably one of Europe's most influential musicians. Coming as it did at the height of the avant-garde movement of the 1960s, it stands out as one that has complete sonic architecture—in song form and structure. Hampel on vibes, bass clarinet and flute is ably assisted in his small group master class by another stellar artist, Willem Breuker on saxophones and clarinets, the Dutchman, Piet Veening on bass and Pierre Courbois on percussion. Together they power their way through an impressive program comprising three gigantic songs.
"Assemblage," is a seven-part suite that is an energetic romp to the edges of composed music. Complete with a themed head, improvised section for all the instrumentalists and a resolution, the music is wonderfully wild and humorous. It pays oblique tribute to some Ducal music and features some wonderful fiery passages on saxophones, chillingly cool vibraharp and exquisite chromatically tuned percussion by Courbois. "Heroicredolphysiognomystery," a seemingly eccentric dedication to Dolphy shows how completely the musicians have absorbed the legendary Africa-Brass Sessions of Coltrane (Impulse, 1961). And "Make Love Not War to Everybody" is simply an eccentric work of art. Heard as a complete suite, though this could be the definitive modern third stream report from Europe.
Состав
Gunter Hampel - vibraphone, bass clarinet, flute
Willem Breuker - soprano, alto, tenor & baritone saxophones, clarinet, bass clarinet
Piet Veening - bass
Pierre Courbois - percussion
Any questions -> support@pro-jazz.com. По всем вопросам пишите -> support@pro-jazz.com
—
207
M0p94ok
Нет комментариев. Ваш будет первым!
Войдите или зарегистрируйтесь чтобы добавлять комментарии