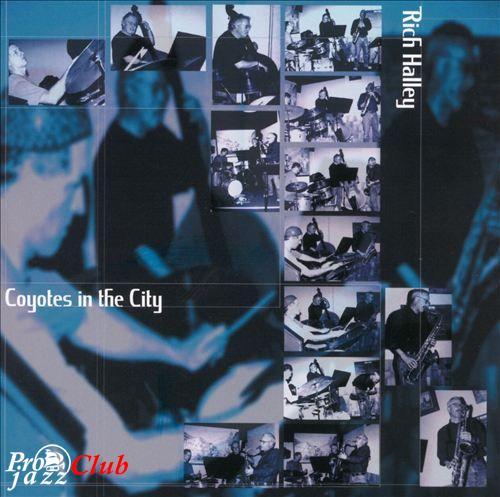 Треклист:
1. Green, Brown And Blue 13:25
2. Green Dusk 7:01
3. Crows 13:24
4. Half Light 5:35
5. Coyotes In The City 13:25
6. Rimrocks 10:03
Лог создания рипа
Содержание индексной карты (.CUE)
Лог проверки качества
Доп. информация:
Album Info & AMG Review
All compositions by Rich Halley
Recorded March 25, 2001 at Califas Studio, Corvallis, Oregon
Produced by Rich Halley & Dave Storrs
Engineered by Dave Storrs
Mastered by Dave Trenkel
Photos by Robert C. Pyle
Layout and design by Ben Brown
Thanks to Megan and John at the Tug Boat, Katie Bretsch, and Betty and Carson Halley
All the tracks on this CD were recorded in one take on Sunday, March 25, 2001. Dave, Clyde and I had played at the Tug Boat the night before and the session felt like an extension of the live performance: we started playing and the music took its own course. That seems to be the operating mode of this group. Some of the compositions, including the title track "Coyotes In The City", were written for a series of walk-in outdoor concerts I have been doing in Powell Butte Nature Park at the east edge of Portland. The musical communication in this trio allows the compositions to develop intuitively and takes the music to a new and different place. - Rich Halley
Oregon-based tenor saxophonist Rich Halley is heard here in a trio setting with bassist Clyde Reed and drummer Dave Storrs. Together, the three speak in a hefty free jazz idiom. Halley's horn is brassy and aggressive, but often warm, alternating between the tumultuous currents of "Green, Brown and Blue" and the rubato calm of "Green Dusk" and "Half Light." On "Crows," he begins with soprano sax improvisation in tempo; the tune edges back toward freedom as Halley switches to percussion and then tenor. The title track finds Storrs suggesting a steady kick-drum beat for the others to chew on; Halley starts out on soprano but then plays wood flute for a spell, returning to sax when Reed locks in the tempo with a half-time walking bassline. Closing with "Rimrocks," Halley and Reed state a plaintive melody in unison with subtle commentary from Storrs; the trio then launches into busy yet thoughtful interplay over a hot, quasi-free groove. A challenging yet rewarding listen, and a valuable reminder that New York isn't the avant-garde's only home.
Состав
Rich Halley: tenor & soprano saxophones, wood flute, percussion
Clyde Reed: bass
Dave Storrs: drums & percussion
По всем вопросам пишите личное сообщение пользователю M0p94ok.
—
148
M0p94ok
Нет комментариев. Ваш будет первым!
Войдите или зарегистрируйтесь чтобы добавлять комментарии