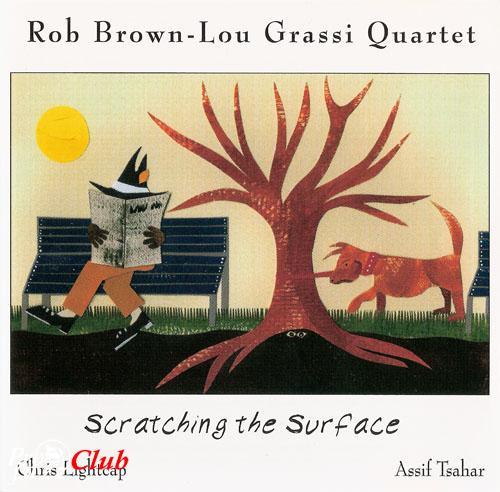 Треклист:
Rob Brown / Lou Grassi Quartet - Scratching the Surface
Жанр: Free Jazz, CIMP
Страна-производитель диска: USA
Год издания: 1998
Издатель (лейбл): CIMP
Номер по каталогу: #161
Страна: USA
Аудиокодек: FLAC (*.flac)
Тип рипа: tracks+.cue
Битрейт аудио: lossless
Продолжительность: 1:11:34
Источник (релизер): собственный
Наличие сканов в содержимом раздачи: да
1 The Arc
2 Stray Arrow
3 A Hatful
4 Clean Sweep
5 3 Rings
6 Triangle
7 Procession
8 Unitarians
Recorded at The Spirit Room, Rossie, NY, October 6 & 7, 1997.
Лог создания рипа
Содержание индексной карты (.CUE)
Об альбоме
Two saxes, bass, and drums playing wildly free jazz might seem like a tough act, but not with the talent assembled here. Alto saxophonist Rob Brown has made a name for himself as a supremely gifted stylist, and if you listen close enough, you can hear the ghost of early Ornette. Add tenor saxophonist Assif Tsahar, who has absorbed the post-Coltrane dialect, and you have a genuine battle of the saxes. Co-leader and percussionist Lou Grassi continues to impress with his forays into the lower depths, aided by the solid chops of bassist Chris Lightcap. High points include the wonderful tunes and arrangements by Brown, as well as his highly inventive soloing. If the horns sometimes seem to fly in different directions, the lengthy improvisations should be a sax lover's delight.
by Steve Loewy
***
The combination of Rob Brown and Assif Tsahar is quickly becoming my pairing of choice for reliably conceived improvisational brilliance. On the several recordings the two have graced together to date they demonstrate a degree of rapport that borders on the supernatural. Reference their unbelievable conversations on William Parker's "Posieum Pendasem" on the FMP label for a slice of what I'm alluding to. This date finds the two earlier in their associations and thankfully delivers another profusion of examples as to why they rank among the upper echelons of improvising musicians.
All four men are at the height of their game on this session and the compositions, authored mainly by Brown, are designed with maximum improvisational opportunities in mind. Lightcap is perhaps most well known as bassist in Joe Morris' working quartet. Grassi's discography has largely been limited to other CIMP dates, but his ingenuity on the drums screams for increased opportunities to record.
“The Arc" sets a tantalizing stage finding the four feeling the surroundings and each other out. Of particular interest is Grassi's athletic solo that closes the tune in wash of thunderous drums. "Stray Arrow" changes direction in a lyrical conversation forwarded by Brown blowing punctiliously across the upper registers of his horn. Grassi's kit is aflutter with tiny percussive accents and Tsahar answers Brown's opening oration with a lyrical turn of his own. On "A Hatful," after a deceptively gradual beginning, the four pull out the all stops in a stampede of sounds. Brown and Tsahar devise one of their elaborate duets blending squealing lines with hermetic proximity and it’s during unison passages such as this that the saxophonists really demonstrate their staggering levels of volatile congruity. Towards the piece’s close, Grassi embarks an extended foray on brushes that is equally engrossing in its muted intricacy.
A nervous energy pervades “3 Rings” thanks mainly to Lightcap’s prickly plucked and bowed bass lines. His iron fingers also introduce Tsahar’s “Triangle” weaving a tight rhythmic texture for the horns to tug against. “Procession” offers a rare reprieve of quietude and finds Brown and Tsahar again trading off solo passages at a decelerated before their final frenetic blowout on Lightcap’s “Unitarians.” As the only recording thus far released by this quartet this meeting of their minds is made all the more valuable. Listeners with even a marginal interest in creative improvised music are strongly advised to seek it out.
By DEREK TAYLOR
***
The Rob Brown and Lou Grassi Quartet is an intense group offering post bop music which is thematically solid in form and composition and heady in its chewy improvisations. And, even with a two man sax line, this music offers excellent deliniation of line and beautiful audio definition of its sound. Recorded October 6 & 7, 1997.
Состав
Rob Brown - alto saxophone
Assif Tsahar - tenor saxophone
Chris Lightcap - bass
Lou Grassi - drums
Any questions -> support@pro-jazz.com. По всем вопросам пишите -> support@pro-jazz.com
—
153
M0p94ok
Нет комментариев. Ваш будет первым!
Войдите или зарегистрируйтесь чтобы добавлять комментарии