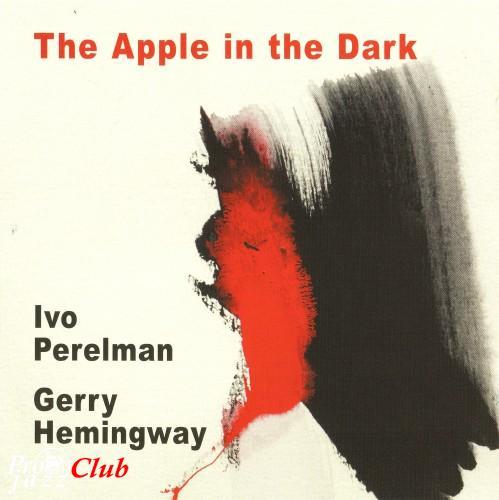 Треклист:
Ivo Perelman, Gerry Hemingway / The Apple In The Dark
Жанр: Free Jazz
Носитель: CD
Страна-производитель диска (релиза): UK
Год издания: 2010
Издатель (лейбл): Leo
Номер по каталогу: CD LR 569
Аудиокодек: FLAC (*.flac)
Тип рипа: image+.cue
Битрейт аудио: lossless
Продолжительность: 1:03:37
Источник (релизер): gssmg7
Наличие сканов в содержимом раздачи: да
Треклист:
01. The Apple In The Dark (3:57)
02. Lispector (3:37)
03. A Maca No Escuro (4:10)
04. Sinful (9:22)
05. Vicious Circle (4:30)
06. The Path (11:58)
07. Green Settings (6:32)
08. Wrestling (4:00)
09. Indulgences (7:22)
10. Lisboa (7:40)
Лог создания рипа
Содержание индексной карты (.CUE)
Доп. информация
Recorded in February 2010 at Parkwest Studios, Brooklyn, New York
Except Piano Tracks Recorded at Hillside Studios, Englewood, Nj.
Об альбоме (сборнике)
This duo album by extremely prolific Brazilian saxophonist, pianist, and painter Ivo Perelman features him in sweaty interaction with veteran out-jazz drummer Gerry Hemingway, and if it lacks the religious abandon of the John Coltrane/Rashied Ali duets on Interstellar Space, or the blow-the-walls-down fury of some of Peter Brötzmann's duo sessions, it's still an extremely energized, compelling record that could easily serve as an introduction to Perelman's work. When he blows, he's channeling Ayler, Shepp, Sanders, and other prominent players of the '60s; when he plays the piano, his closest analogue is Matthew Shipp, combining free ecstasy with rigorous discipline of thought, but it's the Matthew Shipp of the early '90s, as heard on albums like Circular Temple and Critical Mass, that Perelman is channeling. And that's ultimately his greatest limitation as a player, and the reason he's never advanced beyond cult status despite releasing dozens of albums over the last 20 years -- his vision remains bound to the free jazz of the 1990s, and hasn't embraced any of the changes in the music over the past two decades, whether it be extended techniques beyond the shrieking and squawking that David S. Ware and Charles Gayle specialized in, or the use of electronic instruments -- Perelman is yesterday's man, and while there's some excellent playing on this album, it feels out of date and nonessential. ~ phil freeman, allmusic.com
Althouth Perelman played cello, piano and trombone in his youth, he mostly stuck to the sax during his recording career. Yet here he plays the piano too, and to my knowledge the first time ever on record, but I may be wrong of course. His sparring partner is Gerry Hemingway and with great success. The first attack on the first piece is immediately powerful and formidable, as is Hemingway's reaction to it - abstract violence, full of raw energy, but then he switches to piano, first solo, in a quite abstract romanticism, then in duo with Hemingway. The piano-playing, although nice by itself, does not offer Perelman the same power and nuance as he manages on tenor, yet it gives the album the necessary variation. Over the ten tracks, Perelman switches between piano and sax, changing intensity and levels of abstraction. The album is a reference to Brazilian author Clarice Lispector, whose novel "The Apple In The Dark", gives an interior dialogue of a murderer. The novel is also modernistic in its attempt to demonstrate the limitations of language to convey this deep reality without words. Perelman's and Hemingway's take at this is not bad at all. The album sounds fresh and lively, and despite its intellectual subject, they do not fall into the trap of evoking the novel itself. And I like his approach to piano. ~ stef, freejazzblog.org
Состав
Gerry Hemingway - drums
Ivo Perelman - tenor saxophone, piano
По всем вопросам пишите личное сообщение пользователю M0p94ok.
—
231
M0p94ok
Нет комментариев. Ваш будет первым!
Войдите или зарегистрируйтесь чтобы добавлять комментарии