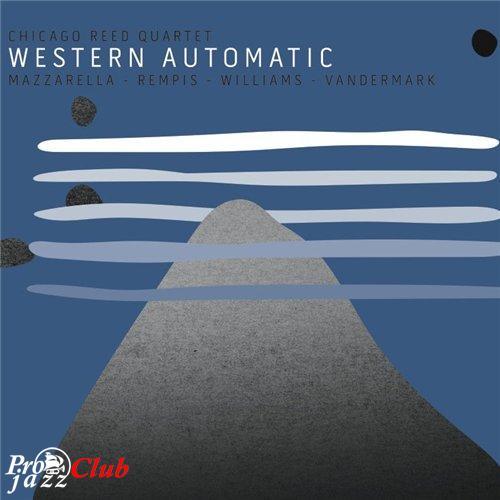 Треклист:
C H I C A G O ' R E E D ' Q U A R T E T
W E S T E R N ' A U T O M A T I C
M A Z Z A R E L L A' -' R E M P I S' -' W I L L I A M S' -' V A N D E R M A R K
'
Жанр: Free Improvisation, Free Jazz
Год издания: 2015
Издатель (лейбл): Aerophonic Records
Номер по каталогу: AR009
Страна исполнителя (группы): USA
Аудиокодек: FLAC (*.flac)
Тип рипа: tracks
Битрейт аудио: lossless
Продолжительность: 64:00
Источник (релизер): WEB
Наличие сканов: нет
Треклист:
1) Burn Unit (Williams)
2) Remnant (Mazzarella)
3) Broken Record Fugue (Vandermark)
4) The Rush (Rempis)
5) Camera Obscura (Mazzarella)
6) P.O.P. (Williams)
7) Hotsy Totsy (Rempis)
8) Detroit Fields (Vandermark)
Лог проверки качества
Об альбоме
AllAboutJazz
After a heyday in the late 1970s which saw the World Saxophone Quartet, ROVA and the 29th Street Saxophone Quartet, to list but three of the more celebrated, strutting their stuff, the format has undergone a hiatus more recently. However it remains firmly established as an instrumental configuration and perhaps the only surprise is that it has taken so long for a Chicago version to emerge. That deficit has been filled by saxophonist Dave Rempis, who has convened a foursome of Windy City-based reed talent which spans four generations of improvisers to form the Chicago Reed Quartet.
Irrespective of age, a welter of interconnections link the selected protagonists, with Ken Vandermark at the heart of a complex web. Both Rempis and Mars Williams enjoyed tenure at different times with the long running but now defunct Vandermark 5, while Nick Mazzarella more recently took his place in Vandermark's Audio One project. Mazzarella aside, everyone wields at least three members of the woodwind family to ensure a varied and colorful sonic palette. Furthermore each contributes two pieces to the book and the resulting variety of approaches engenders a winning program which ranges between tightly scripted and looser confederations.
William's "Burn Unit" sets off with a bang as rhythmic lines fizz back and forth in a dense and exciting haze reminiscent of the WSQ at their best, before a lilting section featuring Mazzarella's soaring alto. The altoist's "Remnant" recalls similar antecedents as its blues inflections and aching rejoinders might have emanated from the pen of Julius Hemphill. Vandermark's baritone riff anchors the latter part of proceedings, reprising a role he has adopted even in freer settings such as the Peter Brötzmann Chicago Tentet, and which recurs throughout the set. He performs the same function on his own "Broken Record Fugue" while Rempis tears up the joint on his own baritone, before both combine behind a William's tenor explosion.
In a welcome change of pace, a chamber ambience balances the high octane thrills on Mazzarella's "Camera Obscura" with Vandermark's piping clarinet prominent and Williams' multi-sectioned "P.O.P." which nonetheless showcases an anguished rollercoaster outing for the author's soprano. But in fact each cut boasts such richness of voicings, interactions and solo spots that it's an invitation to put on the headphones and dive in. It's worth noting that in a sparkling on location recording, the musicians are well-separated across the soundstage with Rempis on the left, then Mazzarella, Williams and finally Vandermark on the right (information from Rempis, not on the sleeve).
(John Sharpe)
Freejazzblog
'Burn Unit' is a pulse quickening way to kick off any album. A simple staccato melody is played in unison until it breaks, splintering free, letting musical statements explode with purposeful energy. The piece is a not so gentle introduction to the powerful and musically adventurous Western Automatic by the Chicago Reed Quartet.
Headed by tenor saxophonist Dave Rempis (and released in his excellent Aerophonic label), the Quartet also features the fearless reed work of fellow Chicagoans Ken Vandermark, Mars William and Nick Mazzarella. Quite a line up, and it is a shame that this may be the group's only recording as it captures an intense and engaging group playing with focus and conviction.
And so 'Burn Unit' is a long song - by the time were at the end, the fiery start has become a moody ending, setting the stage for the more traditional jazz harmonies of 'Remnant'. Showcasing a different side to the group, the slow moving melody is damn near romantic in its lushness. The credits for the album's eight tracks are split evenly among the members, each one with its own personality and approach, like for example 'P.O.P', which begins with a dramatically pensive melody that eventually gives way to an effervescing array of musical ideas.
It could be said that good ideas come in pairs, or it's just something blowing in the wind, but Chicago Reed Quartet has a companion in another Chicago artist, James Falzone, whose recent Regna Ensemble was also a striking reed oriented recording. Even sharing a bit of the same cast, both groups provide evidence of the life and vitality of the woodwind ensemble in avant garde music. Highly recommended!
(Paul Acquaro)
Состав