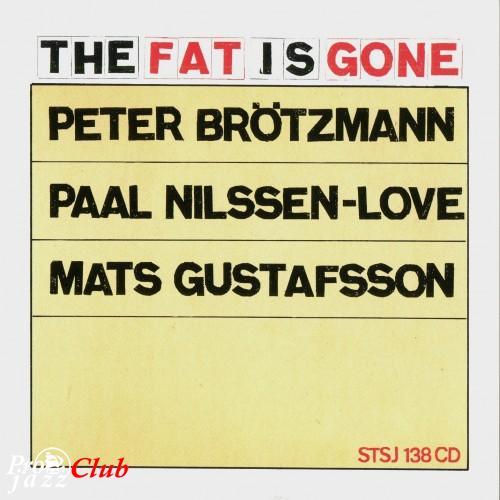 Треклист:
Peter Brötzmann - Mats Gustafsson - Paal Nilssen-Love / The Fat Is Gone
Жанр: Free Improvisation
Носитель: CD
Страна-производитель диска: Norway
Год издания: 2007
Издатель (лейбл): Smalltown Superjazzz
Номер по каталогу: STSJ138CD
Аудиокодек: FLAC (*.flac)
Тип рипа: image+.cue
Битрейт аудио: lossless
Продолжительность: 61:25
Источник (релизер): CD
Наличие сканов в содержимом раздачи: нет
Треклист:
1. Bullets Through Rain 9:58
2. Colours In Action 28:54
3. The Fat Is Gone 22:34
Лог создания рипа
Содержание индексной карты (.CUE)
Доп. информация: Recorded live in Concert on July 20th at Reknes / Molde Jazzfestival / Norway. Mixed and mastered at Decibel.No / Oslo / Norway / November 2006
Об альбоме (сборнике)
Recorded live at the 2006 Molde International Jazz Festival in Norway, this blowing session with superlungs warrior Peter Brötzmann on alto and tenor saxophone and bass clarinet, power improviser Mats Gustafsson on baritone saxophone and his flutophone, and the amazing über-drummer Paal Nilssen-Love is almost exactly what you'd expect. Released on Smalltown Superjazz from Oslo, this intense yet focused free improvisation is just over an hour in length and spans three different selections. The set roars out of the gate with "Bullets in the Rain," with both horn players going for broke and Nilssen-Love simultaneously holding it earthbound while moving it all forward foot by foot until the two saxophonists are in each other's faces in a dialogic communication that is about as subtle as a tank fueled by nitrous oxide. It's rip-your-head-off music that takes no prisoners, never travels less than 90, and still offers fine solos from all three players while clocking in at just under ten minutes as a warm-up sprint for the other two pieces, "Colours in Action" (28:54) and the title cut (22:34). Things begin slowly on "Colours in Action." A single horn player -- beginning with Gustafsson on baritone, bubbling, spitting, and wrangling tortured notes out of his horn -- is accompanied only by random percussion instruments from Nilssen-Love. Brötzmann enters at about six minutes playing his bass clarinet and things get softer. It's almost a study in balladic counterpoint. This textural diversion proves to be exactly that after seven and a half minutes, and then we're back to skronkville with the players so heated up there is nowhere else to go but through the sound barrier, the only dynamic remaining in the piece being a wonderfully intricate yet still overdriven drum solo. The title cut, to finish the performance, combines the best of both worlds in its first nine minutes, with an intricate dialogue going on between saxophonists and drummer, percussion and flutophone, with textural washes of long, harsh yet restrained tones and quick flurries of interplay. But once again, there is nowhere to go but through the roof, and the rocket is off again with somebody shouting because there is no room left on the horn for the notes he wants to get to! One is reminded of airplanes dueling in the sky, swooping and charging one another, wrapping the heavens in turbulent violence that from the ground looks strangely beautiful. This sounds that way -- utterly alien, completely inspired, and furiously active. Moments of tongue technique and skittering hand percussion between the trio collisions add some welcome dynamics, but they also create tension because the listener knows what's going to happen, just not where. The way these players follow one another, spot-on quoting one another's phrases, then offering something in return, is stuff of great gamesmanship and musicianship as well as sonic warfare. All killer, no filler.
Состав
Baritone Saxophone, Reeds [Flutophone] – Mats Gustafsson
Drums, Percussion – Paal Nilssen-Love
Tenor Saxophone, Alto Saxophone, Bass Clarinet – Peter Brötzmann
Any questions -> support@pro-jazz.com. По всем вопросам пишите -> support@pro-jazz.com
—
166
M0p94ok
Нет комментариев. Ваш будет первым!
Войдите или зарегистрируйтесь чтобы добавлять комментарии