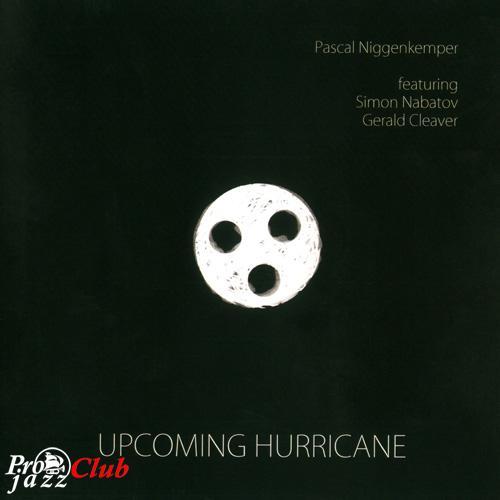 ... review ...
Free jazz trios require an instigator - someone who will incite others to action, counteraction, or response. With the trio of double bassist Pascal Niggenkemper, Simon Nabatov, and Gerald Cleaver, there are three such instigators, and onUpcoming Hurricane, these the three musicians collaborate to create nearly a perfect storm.
A relative newcomer, German-born Niggenkemper invited the two veterans for this improvisation session, and as such, he is the architect of these tracks. Certainly, his bass stands up as an equal voice here, opening the disc with swirling bow work on "Pusteblume," with Nabatov's piano detonated first from the inside (strings), then with some contemplative wondering at the keys; this coming together through mushrooming energy is an appealing feature throughtout. Cleaver's scavenging work at his kit can take on "found sounds," like that of hubcaps and wind chimes, on "Fighting The Mill"; like his work in Farmers By Nature, with William Parker and Craig Taborn, Cleaver shifts from minimalist to thunderous fomenter with ease. But, then, so can Nabatov. The pianist, whose previous work with the drummers such as Tom Rainey, Paul Lovens, and Michael Sarin, can approach these interactions with the scrabble of horn player and the painter-like qualities of a stringed instrument. The delicacy of his playing balances Niggenkemper's fiery momentum and Cleaver's decorations.
The best example of this group's facility is on the nearly 12-minutes title track, where the trio builds a dense, layered, and ever-increasingly energized sound that morphs constantly into a thunderhead. The brewing tempest has Nabatov favoring left hand rumblings, Niggenkemper the reverberations of energy from bowed and plucked strings, and Cleaver a churning surge of power. It is a masterpiece of instant composition.
Mark Corroto ~ allaboutjazz.com
Лог создания рипа
Содержание индексной карты (.CUE)
auCDtect Task Manager
Any questions -> support@pro-jazz.com. По всем вопросам пишите -> support@pro-jazz.com
—
200
M0p94ok
Нет комментариев. Ваш будет первым!
Войдите или зарегистрируйтесь чтобы добавлять комментарии