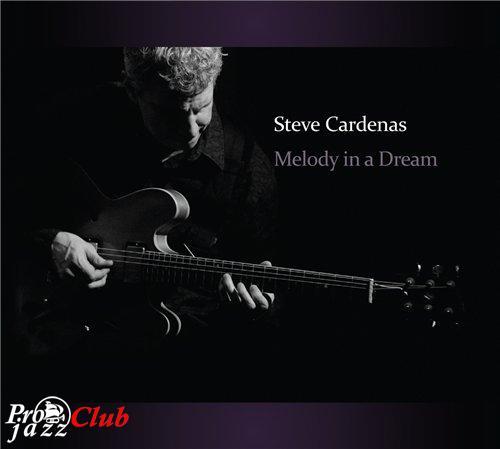 Треклист:
Steve Cardenas
Melody in a Dream Жанр: Contemporary Jazz, Guitar
Год издания: 2014
Издатель (лейбл): Sunnyside Records
Номер по каталогу: SSC1297
Аудиокодек: FLAC (*.flac)
Тип рипа: tracks
Битрейт аудио: lossless
Продолжительность: 49:16
Источник (релизер): WEB (спасибо zabrinski)
Наличие сканов в содержимом раздачи: нет
Треклист:
1. Just One More Thing
2. New Moon
3. Ode to Joey
4. Once Around the Park
5. Broken Time
6. Street of Dreams
7. Subconscious-Lee
8. Peace
9. Teo
10. In The Year of the Dragon
Лог проверки качества
Об альбоме
The influence of personality on art and artists can frequently be perceived through concentrated study of the work of heirs in a similar lineage. In jazz music, the performance of standard repertory or the canonization of the work of certain celebrated composers has become the typical manner by which an artist shows his or her roots and influences.
Guitarist Steve Cardenas has become a standard bearer of sorts for the jazz guitar over his outstanding career. His warm tone and nimble picking echo the sound of the historic legends of the instrument, while his compositional voice has bridged the jazz guitar into the future. Cardenas focused on this bridge in the creation of his new recording Melody In A Dream, a collection of covers from jazz legends, historic and more contemporary, and original tunes written with reverence for the tradition.
Originally hailing from Kansas City, Cardenas has been an important voice in the New York City jazz community since his arrival in the mid-1990s. He was able to become an integral part of a number of fabulous ensembles, including those of bassists Charlie Haden and Ben Allison and drummers Paul Motian and Joey Baron. Cardenas has also led well-received ensembles of his own.
Like countless others, Cardenas has been extremely inspired by his relationships with Paul Motian and Joey Baron. Both drummers developed highly individual methods of playing and composing that have made fans of laymen and experts alike. It should be no surprise that Motian and Baron have meant so much to Cardenas, especially after the guitarist’s time spent in Motian’s Electric BeBop Band and Octet and Baron’s Killer Joey ensemble.
For Melody In A Dream, Cardenas assembled a core trio featuring Baron on drums and bassist Thomas Morgan, another fantastic musician and collaborator of both Motian and Baron. These are musicians that Cardenas has depended upon for years and the conversational aspect of their music can be heard in high fidelity. The impressive trumpeter Shane Endsley also appears on three tracks, providing a captivating foil to Cardenas’s guitar.
The recording begins with three Cardenas originals. “Just One More Thing” is an out of time ballad, a freeing device which was used frequently by Motian, baring the trio’s empathetic musical dialogue. The light and swinging “New Moon,” first featured on Motian’s Electric BeBop Band’s Europe (Winter & Winter, 2001) release, is revisited, while “Ode To Joey” is a joyful exclamation for the drummer and features the effulgent trumpet of Endsley. Motian’s “Once Around the Park” is an evenly paced feature for the masterful Thomas Morgan before handing the conversation off to Cardenas and Baron. The trio then swings Baron’s “Broken Time,” a regular part of the Killer Joey repertoire and a dialogue with the trio trading choruses.
Next is a lush take on the standard “Street of Dreams” shaded with blue hues before the ensemble plus Endsley plunges into Lee Konitz’s “Subconscious-Lee,” an up tempo swinging piece with a perfect balance of intensity and control which also features the conversational aspect of this record, this time between Cardenas and Endsley. Horace Silver’s ballad “Peace” is given a bossa treatment while maintaining the feel of a revelatory tone poem, whereas Thelonious Monk’s off-kilter piece “Teo” is a fiery duo exchange between Cardenas and Baron. The recording concludes with Motian’s “In The Year Of The Dragon,” a wonderfully written and widely swung piece featuring a unison guitar and trumpet melody.
For Melody In A Dream, Steve Cardenas has recorded a cohesive album highlighting compositions that he has loved for a long time. The ensemble performs each piece with a singular haunting quality, which was one of Paul Motian’s musical signatures.
Состав
Steve Cardenas - guitar
Thomas Morgan - bass
Joey Baron - drums
guest
Shane Endsley - trumpet (3, 7, 10)
Any questions -> support@pro-jazz.com. По всем вопросам пишите -> support@pro-jazz.com
—
248
M0p94ok
Нет комментариев. Ваш будет первым!
Войдите или зарегистрируйтесь чтобы добавлять комментарии