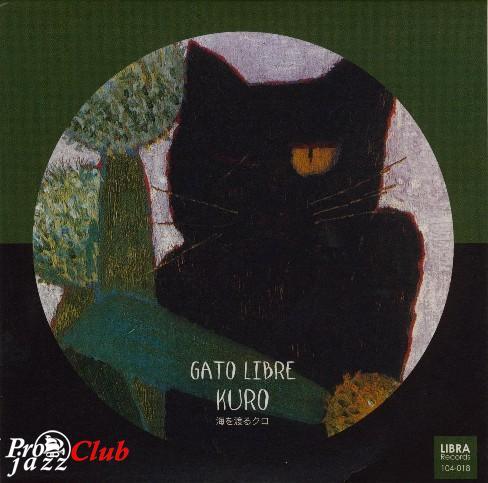 Треклист:
Gato Libre (Satoko Fujii, Natsuki Tamura, Kazuhiko Tsumura, Norikatsu Koreyasu) - Kuro
Жанр: Avantgarde Jazz, Free Jazz, Free Improvisation
Год выпуска диска: 2008
Производитель диска: Libra 104-018
Аудио кодек: FLAC
Тип рипа: tracks
Битрейт аудио: lossless
Продолжительность: 50:13
Трэклист:
01 Sunny spot
02 Patrol
03 Battle
04 Reconcile
05 Together
06 Beyond
07 Kuro
Natsuki Tamura: trumpet
Satoko Fujii: accordion
Kazuhiko Tsumura: guitar
Norikatsu Koreyasu: bass
all compositions by Natsuki Tamura
recorded live at Big Apple in Kobe, 27 May 2007
Доп. информация:
скрытый текст
This is the third album by Gato Libre, the Japanese chamber jazz quartet that brings European folk. Natsuki Tamura plays trumpet, his wife Satoko Fujii accordion, Kazuhiko Tsumura guitar and Norikatsu Koreyasu bass. Tamura is responsible for all the compositions and he's clearly the leader of the band. This record is a little better than its predecessor, if only because the tracks have more of an avant-garde edge, a little more harshness to interrupt the sweetness of the melodies. And these melodies are great, based on Spanish, Italian, and French folk music, and despite the initial clear rhythm and theme, the musicians are skilled enough to explore them, changing the harmonies in their improvisations, moving the pieces away from their confines, but gently, warmly, into musical territory that surprises even the notes making up the melody, as is the case on the waltzing second track. The third track, called "Battle", delivers on its title, with the four musicians soloing consecutively, then all four fight over the tune together, free-for-all style, yet nicely ending in unison. This music is sad, nostalgic, melancholic, but created and played with a great cleverness and sense of humor. It has an enchanting lightness. "Beyond" is more free, without clear structure, and "Kuro", which means "black" in Japanese, ends in all sweetness, a lullaby for Tamura's cat. Tamura's clear trumpet tone is a joy for the ear, but the other three musicians are also excellent.
Tamura is, like Fujii (more on her to come), a master of various genres, capable of blending styles, but also of creating a wonderful mix of sweet and hard sounds, integrating a touch of the bizarre into very familiar tunes. Even if you hear them for the first time, you seem to know them, as if they're part of the collective memory (at least in Europe), but then again they're not, the intimacy is kind of peeled away from it as the tunes evolve, slowly showing another reality behind it, and he's not unlike his compatriot, author Haruki Murakami, in that respect. The fact that he's taken the music a step further really pays off. Recommended.
Review by Francois Couture
With his Gato Libre quartet, trumpeter Natsuki Tamura has succeeded in establishing a unique (and charming) group sound that still allows enough play room to avoid repetition. The Nomad album was slightly different than Strange Village, and the group's third opus, Kuro, also has its own character. That being said, the essential Gato Libre components are still here: the slow, naive, pastoral compositions -- ballads for butoh dancers, it seems -- and the world music element (influences from Arabia and Spain this time around). The instrumentation also remains the same: Tamura's understated trumpet lines, the single-note accordion accompaniment provided by Satoko Fujii, the delicate classical guitar of Kazuhiko Tsumura, and the fluent double bass of Norikatsu Koreyasu. So where's the new? In the attitude. Most of the album sticks to the dreamy yet highly choreographed style of tunes featured on the two previous albums ("Sunny Spot" and "Kuro" are highlights in that vein), but the performers are allowed more room to shine ("Patrol," for instance), and a couple of tracks push the quartet in other directions. "Battle" clearly depicts a struggle, turning into something wilder and more eventful than anything previously recorded by Gato Libre. Similarly, "Beyond" offers a rare moment of free improvisation: without one of Tamura's minute musical maps, the group weaves out some very strong atonal interplay that, besides breaking the relative monochromaticism of the album, bestows even greater beauty to the next piece, the concluding "Kuro." This third album is proof that Gato Libre are not just a passing fancy for Tamura or his zen vehicle to escape the hustle and bustle of the modern jazz world, but a viable artistic proposition rooted in simplicity and beauty.
audiochecker
По всем вопросам пишите личное сообщение пользователю M0p94ok.
—
144
M0p94ok
Нет комментариев. Ваш будет первым!
Войдите или зарегистрируйтесь чтобы добавлять комментарии