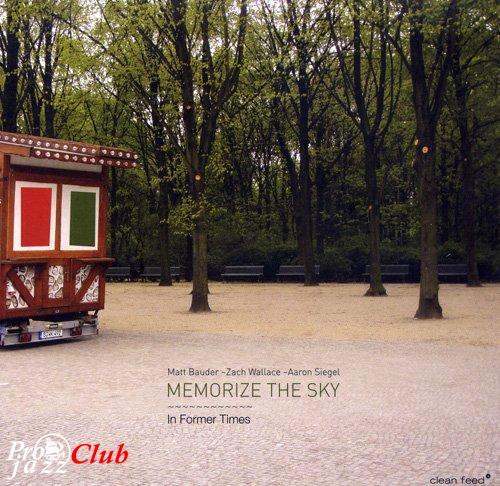 Clean Feed
The music played by Matt Bauder, Zach Wallace and Aaron Siegel - the three sides of the group Memorize The Sky - is like a sudden cold dive on the sea in a very hot summer day. You can't get fresher ideas than these. The instrumentation is the typical one in acoustic improvised music, the reeds-double bass-percussion formula in hard bop, free jazz and free bop, but there's nothing typical in what this troupe usually does, even because sometimes they sound... electronic.
The motive may reside in the personal experiences of the three musicians coming from Michigan, very far from what's usually done in New York and Chicago, the two most important capitals of the American modern and avant-garde jazz ? they were or are presently involved, at the same time, with non-aligned rock bands and musicians like His Name Is Alive, Neil Michael Hagerty, Tara Jane O'Neil, Saturday Looks Good To Me and Low, and very well known experimentalists active in different fields, Anthony Braxton, Jim O'Rourke, Tony Conrad and Alvin Lucier, among others. They have also collaborated with the likes of Ken Vandermark, Rob Mazurek, Scott Rosenberg, Fred Lonberg-Holm, Greg Kelly and Jim Baker to name a few.
MTS engages in free music without the turbulent side of it, and usually with a chamber-like or an ambient (yes, with drones) approach, always with surprising developments. It's Bauder, Wallace and Siegel alone we find in "In Former Times", and what they do is more than enough to conclude that they're changing the frontiers of jazz. It happens again, and that signifies just one thing: the future of this music language is under construction. You can say that this fact is natural when we're dealing with a living art form as this is, but even so it's always remarkable. ~ Clean Feed
AAJ Review
Reedman Matt Bauder, percussionist Aaron Siegel and bassist Zach Wallace have worked together for almost a decade, but In Former Times, recorded live in Austria at the Ulrichsberger Kaleidophon, is only their second full-length disc. Siegel is, in addition to applying his pared-down kit of snare, bass drum and vibes to this recording, a composer of electronic music. Though one might, from the instrumentation, assume this to be another power trio/free-bop outing, Memorize the Sky focuses on sparse and often droning chamber improvisation somewhere between Morton Feldman and the "sustain" pieces of the Spontaneous Music Ensemble. This approach has been coined "lowercase" improvisation, of the brand practiced by saxists Jack Wright and Bhob Rainey or percussionist Sean Meehan. However, this trio somehow manages to turn small gestures into very large sonic areas.
The set starts with rumbling press rolls as Bauder's tenor pulses with energy alternately pillowy and gruff, Wallace's arco harmonics heaving underneath. Though the architecture may seem narrow, the trio is able to weave a warm and enveloping largeness, a specificity that must have filled the concert hall's every nook. Low purrs and gauzy subtones recall Bill Dixon in aesthetic, if not in organizational intent (indeed, Bauder has worked with Dixon through the Exploding Star Orchestra). At six minutes in, the tension subsides rather than releases, a brief pocket of bass drum rattle before Bauder returns with more sparsely-placed muted tones and, amid bells and (drum) head rubs, Wallace picks up the repetitive ken with a driving col legno figure. "I Am the Founder of this Place" finds high, jittery harmonics and bull fiddle at the fore, a canopy of metal from ringing alarms and vibraphone popping out like floaters on a color field. These spatial relationships, as well as subtle shifts in timbre, are the essence of the trio's rhythm. Memorize the Sky deserves wider recognition as their alphabet includes a broad range of sonic fonts. ~ Clifford Allen, AAJ
Free Jazz Review
This is the second album release by Memorize The Sky, the trio consisting of Matt Bauder on reeds, Zach Wallace on bass and Aaron Siegel on percussion. I never heard their previous CD nor the 3" CDs they released before that, but their music is quite unique. Bauder's circular breathing takes center stage on most tracks, leading to gentle droning sounds, accompanied by extremely precise and accurate gentle touches by the bass and percussion, in the all the wealth of sounds they can muster. At times it sounds like the roles are reversed, and that the horn forms the backbone of the music, while the other instruments add the variation. Even if there is no circular breathing, Bauder still keeps the tune strongly anchored around a single tone center, as in the beautiful first track "Did I Tell You?". The other instruments pulse along in very repetitive patterns, shifting all the time in timbre and shading, uncovering hitherto unexpected musical qualities and textures. I am very often a little hesitant with avant-garde, because the form often takes precedence over the content, but that is certainly not the case with this band. They give the sax trio a totally different sound and dimension, while still sounding accessible and emotionally sensitive, sometimes it sounds almost electronic or industrial, but it could also be the oscillating sounds of nature brimming with insect life. Only one track, "Treat Me Like A Picture" did not really strike me (yet), but it adds variation and a slight difference in approach. There is a long moment in this piece on which it is hard to discern which instrument makes which sound, or rather, and it's hard to believe, in which all three musicians make a long, sustained, identical sound despite the difference in instrumentation. The last track is also an absolute beauty. An excellent record. ~ Free Jazz Blog
EAC Report
Any questions -> support@pro-jazz.com. По всем вопросам пишите -> support@pro-jazz.com
—
139
M0p94ok
Нет комментариев. Ваш будет первым!
Войдите или зарегистрируйтесь чтобы добавлять комментарии