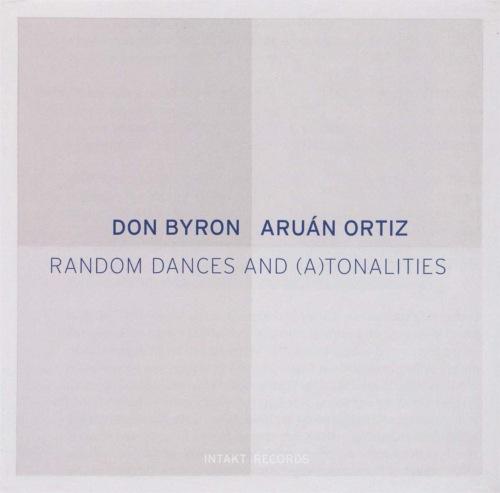 Издатель (лейбл):
Intakt Records
Битрейт аудио:
lossless
Треклист:
DON BYRON ' ARUÁN ORTIZ
RANDOM DANCES AND (A)TONALITIES
'
Жанр: Avant-Garde Jazz
Год издания: 2018
Издатель (лейбл): Intakt Records
Номер по каталогу: CD 309
Страна исполнителя: USA
Аудиокодек: FLAC (*.flac)
Тип рипа: tracks
Битрейт аудио: lossless
Продолжительность: 55:34
Источник (релизер): WEB
Наличие сканов: нет
Треклист:
1. Tete's Blues (A. Ortiz)
2. Black and Tan Fantasy (Duke Ellington)
3. Musica Callada: Book 1, V. ([M.M.] crochet = 54) (Federico Mompou)
4. Joe Btfsplk (D. Byron)
5. Numbers (A. Ortiz)
6. Dolphy's Dance (Geri Allen)
7. Violin Partita No. 1 in B minor, BWV 1002, II. Double (J. S. Bach/arr. D. Byron)
8. Delphian Nuptials (D. Byron)
9. Arabesques of a Geometrical Rose (A. Ortiz)
10. Impressions on a Golden Theme (D. Byron/A. Ortiz)
Лог проверки качества
Об альбоме
Two highly accomplished artists—one long-established, the other solidifying his legacy—are brought together on Random Dances And (A)Tonalities. This duo outing features clarinetist and saxophonist Don Byron and pianist Aruán Ortiz. The two gifted composers have been playing together, at Ortiz's initial request, since 2014 but in larger ensembles. In late 2017 Byron and Ortiz met in a studio in Zürich, Switzerland to record this eclectic set which plays to both artists' broad musical sensibilities.
One of the most wide-ranging reed players and composers in modern music, Byron has worked in rock, rap, klezmer and experimental music with the larger body of his projects rooted in jazz. He often produces albums with a central theme as he did with his first release, Tuskegee Experiments (Nonesuch, 1992) and his most recent Love, Peace, and Soul (Savoy, 2012) a gospel quintet tribute to Thomas A. Dorsey & Sister Rosetta Tharpe. Byron has a dozen previous releases as a leader and has appeared as a sideman on more than fifty others. Among the many top artists he's worked with are Hamiet Bluiett, Bobby Previte, Steve Coleman, Anthony Braxton, David Murray, Marilyn Crispell, Bill Frisell, Ralph Alessi and Uri Caine. His compositions have been recorded by the string quartet ETHEL, Bang on a Can and avant-garde pianist Lisa Moore.
Ortiz was playing piano, violin and viola before he was in his teens and served as director of his school's band as a teenager. Now a Brooklyn resident, he has documented his study of Cubism in his native Cuba on two previous Intakt label releases, Hidden Voices (2016) and Cub(an)ism (2017). Ortiz payed tribute to past Cuban composers Ignacio Cervantes and Antonio María Romeu on his solo recording Cuban Nocturne (Newvelle Records, 2017). His progressive post-bop-meets-free improvisation style is best seen in a project like Banned in London (Whirlwind Recordings, 2012) where he co-leads an all-star quintet with bassist Michael Janisch. Most recently he joined Craig Taborn, Sylvie Courvoisier, Kris Davis and other pianists on the excellent Six Encomiums for Cecil Taylor (Tzadik, 2018).
Random Dances And (A)Tonalities presents Byron and Ortiz deeply involved in a succession of fascinating and sparkling interchanges. Ortiz wrote three of the ten pieces on the album, and Byron, another pair. "Tete's Dream" opens the album and was written for Ortiz's son. The pianist imposes varying degrees of force while Byron, on clarinet, searches in and around the flow of the piano. Now on tenor saxophone, Byron adds a touch of klezmer to Duke Ellington's "Black and Tan Fantasy" giving the piece a fresh and stimulating renovation. "Música Callada: Book 1, V. ([M.M.] crochet = 54)" and Bach's "Violin Partita No.1 In B Minor, BWV 1002, II. Double" are the two classical compositions covered, the latter as a clarinet solo. Byron tips his cap to Ortiz's fascination with cubist abstraction on "Joe Btfsplk," based on the standard "Donna Lee." Both artists have a strong connection to Geri Allen; the late pianist/composer was an early inspiration for Ortiz and a colleague to Byron. Her "Dolphy's Dance," from original charts that Byron had in his possession, captures the intricacy and jubilant elasticity of Allen's tune. The concluding number, "Impressions On A Golden Theme," written by the duo, again leans into classical elements and is guided by Byron's upper register clarinet and Ortiz's accents, both light and dark.
Byron and Ortiz are a captivating combination, both open-minded virtuosos at home in multiple creative music genres as well as the spaces in-between. The stylistic reach of Random Dances And (A)Tonalities is extensive but there is a consistency linked not just to instrumentation, but also to the elegance and mystery present in the reading of each of the compositions here. Complexities aside, this is the kind of album that rewards repeated listening with its nuances and the clandestine beauty of these pieces.
(Karl Ackermann, allaboutjazz.com)
Состав