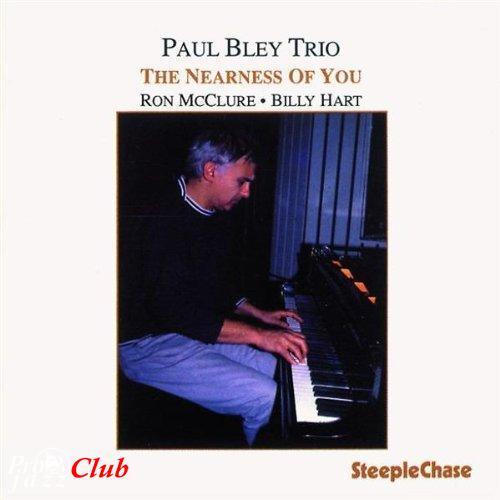 Треклист:
Paul Bley Trio - The Nearness of You
Жанр: Avant-Garde Jazz
Год издания диска: 1989
Издатель (лейбл): SteepleChase
Номер по каталогу: SCCD 31246
Аудио кодек: WavPack (*.wv)
Тип рипа: image+.cue
Битрейт аудио: lossless
Продолжительность: 65:59
Источник (релизер): ffsf (hqshare)
Наличие сканов в содержимом раздачи: нет
Треклист:
01. This Can't Be Love (Hart-Rodgers)
02. The Nearness of You (Carmichael-Washington)
03. What a Difference a Day Makes (Adams-Grever)
04. These Foolish Things (Link-Marvell-Strachey)
05. Blues in the Closet (Pettiford)
06. Lullaby of Birdland (Shearing-Weiss)
07. We'll Be Together Again (Fischer-Laine)
08. Take the A-Train (Ellington-Strayhorn)
Состав:
Paul Bley - piano
Ron McClure - bass
Billy Hart - drums
Recorded November 21, 1989.
Лог создания рипа
Review by Thom Jurek
Recorded in 1989 and issued simultaneously on LP and CD, the digital version features two extra cuts and thus weighs in at about 16 minutes longer than the vinyl. The first question is why an artist of Bley's restlessness and vision would record a batch of tunes like these old nuggets in the first place. Bley's trio on this date is an estimable one: Drummer Billy Hart and bassist Ron McClure join the pianist for eight standards that range from the title track by Hoagy Carmichael to Oscar Pettiford's "Blues in the Closet" to George Shearing's "Lullaby of Birdland." Bley has an interesting way of approaching standards, which is why this hard bop rhythm section is key to the performances here. While he may approach Richard Rodgers' "This Can't Be Love" as a bebop tune with a modal sensibility -- he found the mode inside the tune's architecture -- Bley's sense of phrasing falls out of all the traditional jazz boxes. His bebop style is full of angular spaces and odd half notes and his modal mannerisms suggest tonal maneuvers requiring notes that go by at a clip (16th, even a 32nd in a major seventh chord run!) in counterpoint with McClure. Of course, this is what makes the man one of the bona fide geniuses of the music -- his manner of reworking something so it is something totally different yet still sounds like itself. In a ballad like the title tune, Bley allows Hart plenty of room to explore with his brushes by creating huge spaces in the melody, not merely by syncopation but by extending the chordal reach of the tune itself and allowing the tempo to hover rather than move toward any particular measure or melodic invention (of which there is plenty). Strangely, his reading of the Carmichael number is deeply moving, and played in a manner that suggests Mal Waldron's with a lighter touch and a longer reach for harmonic structures. The trio's performance of "What a Difference a Day Makes" seems rushed at first, as the musicians slip through the melody like a breeze through a screen door -- but it's all smoke and mirrors. Bley is moving the melody around to find room for McClure and Hart to lay back and coast on where he's taking the harmony, which is into a realm that suggests Herbie Nichols and Bill Evans. By the time Bley gets to Shearing's tune and the closer, Billy Strayhorn's "Take the 'A' Train," he's convinced us all once again that there is something new in everything. While the Strayhorn stalwart may be one of the most recorded jazz tunes in history, it has never sounded like this. Before the melody falls like dominoes and like lightning from Bley's right hand, he moves through a series of Monkish augmented chords that make no apparent sense harmonically until the melody jumps right out of them. As McClure and Hart move to double time, Bley triples and they're off and running, floating back and forth between pitches and key changes, even slipping in a bit of Ornette's chromaticism at the break. The other cool thing is that Bley manages to quote, however minutely, from every other tune on the session in his solo! This date is Bley at his most relaxed and amiable, playing with two veterans who not only handle his sudden shifts in mood and color but, more often than not, texture them in advance of what's coming -- dig McClure's hammer-on run near the end of "'A' Train" and, as Bley follows him and opens the scale up, you'll get a stunning example. This is Bley at his level jamming best. If this had been a cutting session, I'd have hated to be the horn player.
Any questions -> support@pro-jazz.com. По всем вопросам пишите -> support@pro-jazz.com
—
190
M0p94ok
Нет комментариев. Ваш будет первым!
Войдите или зарегистрируйтесь чтобы добавлять комментарии