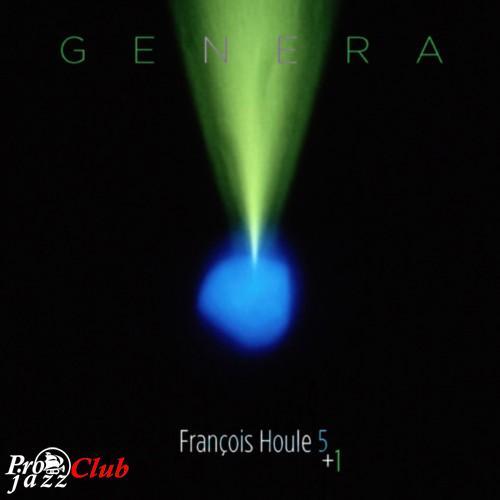 Треклист:
François Houle 5 + 1
G e n e r a
Жанр: Avant-Garde Jazz
Год издания: 2012
Издатель (лейбл): Songlines
Номер по каталогу: SGL 1595-2
Аудиокодек: FLAC (*.flac)
Тип рипа: tracks
Битрейт аудио: lossless
Продолжительность: 55:31
Источник (релизер): WEB
Наличие сканов в содержимом раздачи: booklet.pdf
Треклист:
1. Le concombre de Chicoutimi I
2. Essay #7
3. Guanara
4. Albatros
5. Le concombre de Chicoutimi II
6. Old Paradigm
7. Piano Loop (for BD)
8. Punctum II
9. Sulfur Dude
10. Mu-turn Revisited
Лог проверки качества
Об альбоме
One of Canada’s premier classical and contemporary classical clarinetists, François Houle is also a virtuosic and original avant-jazz improviser and a notable composer, as can be heard on his duo releases with the acclaimed French pianist Benoit Delbecq (most recently Because She Hoped, Songlines 2011). His first CD, which was also the first Songlines release, was his septet Et Cetera (1992). Now he has finally put together a new touring band consisting of outstanding international leaders in jazz/creative music, including New York based Canadians Michael Bates and Harris Eisenstadt, the young Swiss trombonist Samuel Blaser, and Braxton associate Taylor Ho Bynum. “The lineup was very crucial, as I wanted to explore colors and varied instrumental combinations while retaining a classic jazz sound. I also desired to have strong idiosyncratic voices in each chair of the band so that the compositions would be designed for the players’ personalities, coming to life in a kind of Ellingtonian way.” The group coalesces in an intense and moving collaboration that balances spontaneous exploration and disciplined ensemble, dense textures and spare, off-kilter lyricism.
From one angle this is as much of a jazz record as Houle’s beautiful 1998 John Carter tribute In the Vernacular (which featured Dave Douglas and Mark Dresser); from another it brings together his classical music interests with free improv. The common factor is a keen awareness of 20th century music in its various manifestations and a fascination with the structure and organization of sound in both composition and improvisation. “I've been very influenced by the music of John Carter and Steve Lacy, primarily because of their mastery of orchestration in small groupings. Jimmy Giuffre would be another important influential figure in terms of orchestration. I've always been seduced by a kind of composition that makes full use of instrumental colors: Stravinsky, Prokofiev, Elliott Carter, Ligeti, Xenakis. In the jazz arena I would be attracted to the more colorful approaches of Gil Evans, Toshiko Akiyoshi, Bob Brookmeyer....I wanted my new band to have that kind of versatility, but with the writing focusing on instrumental combinations at the micro level.” An example of these ideas is how Delbecq’s piano sounds progressively combine with the other instruments in “Piano Loop (for BD).”
“My ideas always come from a musical standpoint, putting tones, pitches or rhythms together. How I process these ideas, however, borrows from many sources, including art, literature, architecture, mathematics, science. For example, I am very much into neuroplasticity, new understandings of how our cognitive functions adapt to our environment, and also how we perceive time. This knowledge inspires a different way of looking at our relationships to sound and rhythm. A good example is found in “Concombre I,” where all the lines are derived from the main melody in the clarinet, except that for each of the other parts I stretch the rhythm values incrementally. The end result is a strange diatonic counterpoint producing a very potent mood. I wrote this as I was thinking about a hockey legend's untimely death from tuberculosis (George Vezina).”
“Most of the compositions on this record started from a sound, a small of group of sounds, or a rhythmic cell. So the intent, feeling, mood of the compositions are already present at the start. It was really important for me to realize and construct ideas from an evocative primary state. I called the album Genera to express this idea of a genetic code that is present from the very beginning of the creative process....Ultimately, you want your playing to be in line with an inner purpose, be it raw or sweet. Your job as a musician is to tap into these potentials via sounds. You become a vehicle for something that is intrinsically a human experience. At least that is what I sense when I hear great music making. It always seems to come from a very deep place. If I can walk the fine line between virtuosity and expressivity, then I shouldn't be too far off my ideal of what music means to me personally.”
Состав
François Houle - clarinets
Taylor Ho Bynum - cornet, flugelhorn
Samuel Blaser - trombone
Michael Bates - bass
Harris Eisenstadt - drums
+ Benoit Delbecq - piano
Any questions -> support@pro-jazz.com. По всем вопросам пишите -> support@pro-jazz.com
—
180
M0p94ok
Нет комментариев. Ваш будет первым!
Войдите или зарегистрируйтесь чтобы добавлять комментарии