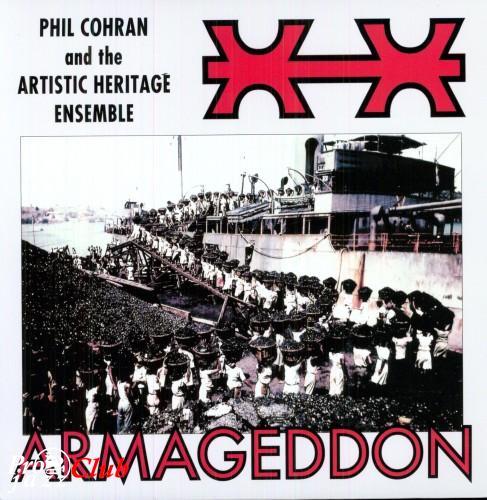 Треклист:
Phil Cohran and The Artistic Heritage Ensemble / Armageddon 1968
Жанр: Avant-Garde Jazz, AACM
Год издания: 2010
Издатель (лейбл): Katalyst Entertainment
Номер по каталогу: 639492006964
Страна: USA
Аудиокодек: FLAC (*.flac)
Тип рипа: tracks+.cue
Битрейт аудио: lossless
Продолжительность: 00:33:04
Источник (релизер): davin900
Наличие сканов в содержимом раздачи: нет
Треклист:
1 Motherless Child
2 Creation Of The Beast
3 The Warning
4 The Window
5 Armageddon
Armageddon was conceived in 1958 and written down in 1963. After performing with Sun Ra and benefitting from the teachings of the Honorable Elijah Muhammad, Phil Cohran's compositions changed decidedly, and he began to focus on cosmology and culture.
This particular performance was recorded live at the Affro Arts Theatre at 3900 S. Drexel, Chicago, IL on February 11th, 1968.
youtube
Лог создания рипа
Содержание индексной карты (.CUE)
Об исполнителе (группе)
Джазовый подкаст jazz.ru
Об альбоме (сборнике)
This album is influenced more under the teachings of Elijah Muhamad compared to the other albums. It starts with a song called “Motherless child”. More than a negro spiritual this is is something from all nations. It is still sung like a slave song sung with the deep baritone voice of Rev.Spencer Jackson backed by a droning-mourning brass section which gives a dramatic tension. This is responded to by the high female voice of Ella Pearl Jackson, as if this second voice is bringing a peaceful motherly nurturing cure to the sorrow of the past.
“Creation of the beast” I guess is based upon one of Eliah Muhamed's science-Fiction-like parables. The music in the track is supposed to “demonstrate the cosmic order being improperly imposed on all facets of our environment”. Musically we hear a deep brass with some disharmonious accents, crying like ducks, harmonies of brass arrangements strangely getting out of balance despite a steady drive, with a few crazy shouts of people, during a rhythmic repetition of a theme, this sounds like a world with a factor of disorder, during a steady rhythmic theme, some nice full brass arrangements can conclude the theme.
“The warning” refers to Hiroshima and the earth as a place of unrest and the concern of some aliens if this could bring cosmic imbalance. This track shows even more transformation processes of a few disharmonic elements. The track unfolds with dramatic switches. The different layers develop rhythmically. Then a deep sax sax solo plays in between it, a wild great solo which I will describe like “a mad dog with feeling for melody” finding pleasant swing in its voice of transformed madness. Then another solo is added on top until the second sax takes over. Rhythmically this is really appealing. Then the full bands takes over the musical themes to some furious height and energetic greatness on the edge of breaking apart, with a few screams in background, and the drama tension gets bigger, while congas and double bass play the theme very steadily. After this the musical composition ends harmoniously with an arranged brass closing theme.
“The Window” continues the story about the vision of the aliens over the situation on the earth, trying to alter the situation through magnetic changes. This track starts with a slow repetition of short musical theme led by thumb piano with a slow brass arrangement on top. It is a dreamy repetition. A sax solo comes on top of that, while the rest of band continues with a sort of hypnotic returning theme in the background, which includes a constant droning sort of notes on brass. The theme with its repetitions on thumb piano is played in a sleepy rhythm. Then the sax improvises over it again, as if awaiting a sort of awakening. With it another solo on eastern clarinet appears. The tension becomes very quiet, but concludes with more arrangement and melody.
The last track, “Armageddon” is a track on unbearable climate changes and disasters. It is a spoken word talking about a final conflict before returning to peace. Drumming, shouts, loud shouts of voices, bass, all are setted into a rather chaotic musical situation, like a filmic description of end of world chaos and conflict, where one of the loudest voices sounds like a preacher, which is first out of balance with the energy, then turning into more spiritual talk when the situation cools down. It is the brass band itself which brings back peace. A last brass harmony theme sounds like a relief as if becoming a song for the rising of the sun. psychemusic.org
Состав
Alto Saxophone – Charles James Williams
Baritone Saxophone, Tenor Saxophone – Donald Myrick
Bass – Louis Satterfield
Congas – Master Henry Gibson
Cornet, Composed By, Arranged By – Philip Cohran
Drums [Trap Drums] – Bob Crowder, Jr.
Guitar – Pete Cosey
Oboe [Chinese Musette], Trumpet – Charles Handy
Tenor Saxophone – Eugene Easton
Trombone – Willie Woods (2)
Tuba – Aaron Dodd
Any questions -> support@pro-jazz.com. По всем вопросам пишите -> support@pro-jazz.com
—
152
M0p94ok
Нет комментариев. Ваш будет первым!
Войдите или зарегистрируйтесь чтобы добавлять комментарии