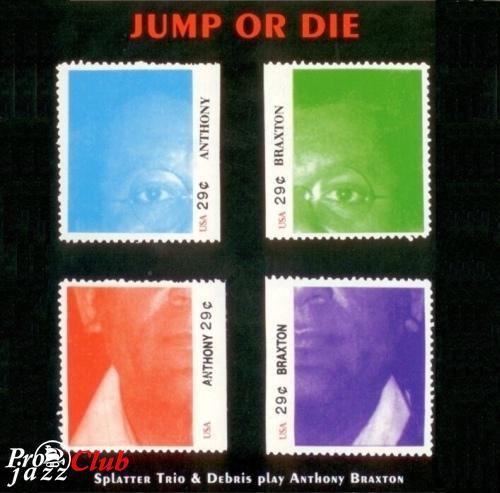 Треклист:
Splatter Trio & Debris - Jump or Die (Splatter Trio & Debris play Anthony Braxton)
21 Anthony Braxton Compositions 1992 (with Randy McKean, Tom Plsek & Gregg Bandian)
Жанр: Avant-garde / Free Jazz
Страна-производитель диска: USA
Год издания диска: 1994
Издатель (лейбл): Music & Arts
Номер по каталогу: CD-843
Аудио кодек: APE (*.ape)
Тип рипа: image+.cue
Битрейт аудио: lossless
Продолжительность: 01:16:30
Источник (релизер): basa005
Наличие сканов в содержимом раздачи: да
Треклист:
1. Compositions 40E(+40D) + (40P + 69Q) + 40(O)
2. Composition 48
3. Composition 23D(+180A)
4. Composition 50(+53)
5. Composition 142
6. Composition 15
7. Compositions 69L + (122 + 69I) + 69D
8. Composition 74C
9. Compositions (120D + 90) + (23C + 133)
Composed By Anthony Braxton
Лог создания рипа (EAC Log)
Содержание индексной карты (.CUE)
Об альбоме
When this album appeared in 1994, the general reaction was, "It's about time!" Over the previous 25 or so years, Anthony Braxton had created several hundred compositions that, despite their unique combinations of beauty and complexity, were rarely covered. Even better, the two San Francisco-based groups who came together for this project took advantage of one of Braxton's major conceptual developments of the '80s: the idea of having individual members of his ensembles being able to play any of his pieces at any time during a performance, treating his repertoire as a vast well to be freely sampled. So listeners have the gorgeous "Composition 23D" (fondly recalled as side one, cut three from Braxton's classic Arista release, New York, Fall 1974) lovingly read with baritone and vibes in front and gradually blended in with the abstract "Composition 108," ushered in by bass and drums. It's a
good example of how complicated and even jolting this approach can be, even to those familiar with Braxton's music. On the original "Composition 23D," during the recapitulation of the theme (and expansion on it), there's a wonderful interplay between the lead horns and rhythm. Here, the bass and drums are off in another territory entirely, forcing the listener to reconcile the divergent paths under the general rubric of "Braxtonia." Very difficult, but very intriguing and often rewarding. The musicians from the Splatter Trio and Debris divide and coalesce into various configurations, altering instrumentation in imaginative ways and usually offering fresh perspectives on Braxton's challenging music. Among others, cornetist Keith Hedger and percussionist Gino Robair stand out for their evocative work. Do the combinations always succeed? No, sometimes they can sound a bit forced, as though
the compositions are at loggerheads with each other. This latter problem, however, may be one of Braxton's deeper points: dealing with situations where different groups have different goals. All told, Jump or Die is a fascinating document and well worth hearing. One can only wish that more musicians would take up the mantle. ~ Brian Olewnick
All songs written or co-written by Anthony Braxton. Option (5-6/95, p.133) - "...what this release announces is how crucial Braxton has been to creative improvised music in the last 20 years..."
Back
По всем вопросам пишите личное сообщение пользователю M0p94ok.
—
290
M0p94ok
Нет комментариев. Ваш будет первым!
Войдите или зарегистрируйтесь чтобы добавлять комментарии